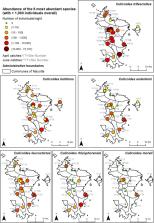 The south-west insular territories of the Indian Ocean have recently received attention concerning the diversity of arthropods of medical or veterinary interest. While a recent study highlighted the circulation of Culicoides-borne viruses, namely bluetongue and epizootic hemorrhagic disease, with clinical cases in Mayotte (comprising two islands, Petite-Terre and Grand-Terre), Comoros Archipelago, no data have been published concerning the species diversity of Culicoides present on the two islands.

A total of 194,734 biting midges were collected in 18 sites, covering two collection sessions (April and June) in Mayotte. Our study reports for the first time livestock-associated Culicoides species and recorded at least 17 described Afrotropical species and one undescribed species. The most abundant species during the April collection session were C. trifasciellus (84.1%), C. bolitinos (5.4%), C. enderleini (3.9%), C. leucostictus (3.3%) and C. rhizophorensis (2.1%). All other species including C. imicola represented less than 1% of the total collection. Abundance ranged between 126–78,842 females with a mean and median abundance of 14,338 and 5111 individuals/night/site, respectively. During the June collection, the abundance per night was low, ranging between 6–475 individuals. Despite low abundance, C. trifasciellus and C. bolitinos were still the most abundant species. Culicoides sp. #50 is recorded for the first time outside South Africa.

Our study reports for the first time the Culicoides species list for Mayotte, Comoros Archipelago, Indian Ocean. The low abundance and rare occurrence of C. imicola, which is usually considered the most abundant species in the Afrotropical region, is unexpected. The most abundant and frequent species is C. trifasciellus, which is not considered as a vector species so far, but its role needs further investigation. Further work is needed to describe Culicoides sp. #50 and to carry on faunistic investigations on the other islands of the archipelago as well as in neighboring countries.

The species-accumulation curve and estimation of species richness

Martin Groschup,  Claire Garros,  Simon Carpenter … (2013)
The emergence of multiple strains of bluetongue virus (BTV) and the recent discovery of Schmallenberg virus (SBV) in Europe have highlighted the fact that exotic Culicoides-borne arboviruses from remote geographic areas can enter and spread rapidly in this region. This review considers the potential for this phenomenon to impact on human health in Europe, by examining evidence of the role of Culicoides biting midges in the zoonotic transmission and person-to-person spread of arboviruses worldwide. To date, the only arbovirus identified as being primarily transmitted by Culicoides to and between humans is Oropouche virus (OROV). This member of the genus Orthobunyavirus causes major epidemics of febrile illness in human populations of South and Central America and the Caribbean. We examine factors promoting sustained outbreaks of OROV in Brazil from an entomological perspective and assess aspects of the epidemiology of this arbovirus that are currently poorly understood, but may influence the risk of incursion into Europe. We then review the secondary and rarely reported role of Culicoides in the transmission of high-profile zoonotic infections, while critically reviewing evidence of this phenomenon in endemic transmission and place this in context with the presence of other potential vector groups in Europe. Scenarios for the incursions of Culicoides-borne human-to-human transmitted and zoonotic arboviruses are then discussed, along with control measures that could be employed to reduce their impact. These measures are placed in the context of legislative measures used during current and ongoing outbreaks of Culicoides-borne arboviruses in Europe, involving both veterinary and public health sectors. Copyright © 2013 The Authors. Published by Elsevier B.V. All rights reserved.

Nohal Elissa,  Didier Fontenille,  Leïla Bagny Beilhe … (2009)
Biological invasions generally induce profound effects on the structure of resident communities. In Mayotte, where Aedes aegypti and Ae. lilii were already present, the recent introduction of Ae. albopictus raises public health concerns because it may affect the risk of arbovirus transmission. Entomological surveys were carried out in six locations on the island following a transect defined by a gradient from urban to rural habitats during a dry and a wet season. A total of 438 larval habitats containing Aedes spp. immature stages were surveyed. We evaluated the characteristics of larval habitats and analyzed the field distribution of Aedes spp. throughout Mayotte using generalized linear models. Artificial containers used for water storage were significantly more productive for Ae. albopictus immature stages than for Ae. aegypti ones. Most of natural larval habitats collected were colonized by Ae. aegypti, and it was also the most common Aedes species encountered in rural habitats. Conversely, Ae. albopictus greatly predominated in urban and suburban habitats and during the dry season. Ae. lilii was uncommon and occurred preferentially in leaf axillae and dead leaves on the ground. Ae. albopictus has rapidly colonized the inhabited areas of Mayotte. A displacement of Ae. aegypti populations by Ae. albopictus populations in urban areas might be happening. The increasing urbanization seems to greatly favor the presence of the invasive species. Thus, arbovirus surveillance programs should focus, as a priority, on areas where this vector is present because of a higher risk of emergence of an epidemic source of arboviruses.