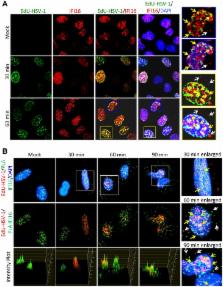 Interferon-γ inducible factor 16 (IFI16) is a multifunctional nuclear protein involved in transcriptional regulation, induction of interferon-β (IFN-β), and activation of the inflammasome response. It interacts with the sugar-phosphate backbone of dsDNA and modulates viral and cellular transcription through largely undetermined mechanisms. IFI16 is a restriction factor for human cytomegalovirus (HCMV) and herpes simplex virus (HSV-1), though the mechanisms of HSV-1 restriction are not yet understood. Here, we show that IFI16 has a profound effect on HSV-1 replication in human foreskin fibroblasts, osteosarcoma cells, and breast epithelial cancer cells. IFI16 knockdown increased HSV-1 yield 6-fold and IFI16 overexpression reduced viral yield by over 5-fold. Importantly, HSV-1 gene expression, including the immediate early proteins, ICP0 and ICP4, the early proteins, ICP8 and TK, and the late proteins gB and Us11, was reduced in the presence of IFI16. Depletion of the inflammasome adaptor protein, ASC, or the IFN-inducing transcription factor, IRF-3, did not affect viral yield. ChIP studies demonstrated the presence of IFI16 bound to HSV-1 promoters in osteosarcoma (U2OS) cells and fibroblasts. Using CRISPR gene editing technology, we generated U2OS cells with permanent deletion of IFI16 protein expression. ChIP analysis of these cells and wild-type (wt) U2OS demonstrated increased association of RNA polymerase II, TATA binding protein (TBP) and Oct1 transcription factors with viral promoters in the absence of IFI16 at different times post infection. Although IFI16 did not alter the total histone occupancy at viral or cellular promoters, its absence promoted markers of active chromatin and decreased those of repressive chromatin with viral and cellular gene promoters. Collectively, these studies for the first time demonstrate that IFI16 prevents association of important transcriptional activators with wt HSV-1 promoters and suggest potential mechanisms of IFI16 restriction of wt HSV-1 replication and a direct or indirect role for IFI16 in histone modification.

HSV-1, a ubiquitous human pathogen that establishes a life-long infection, has evolved several mechanisms to evade host immune detection and responses. However, it is still subject to regulation by cellular factors. Recently, a host nuclear protein, IFI16, was shown to be involved in the innate defense response to HSV-1 infection. Here, we provide the first evidence that IFI16 inhibits wild-type HSV-1 replication by repressing viral gene expression independent of its roles in the immune response. We show that IFI16 binds the HSV-1 genome at the transcription start sites of several HSV-1 genes. Using a permanently IFI16-negative cell line that we generated, we demonstrate that IFI16 reduces the association of important transcription factors. IFI16 also promotes global histone modifications by increasing the markers of repressive chromatin and decreasing the markers for activating chromatin on viral and cellular genes. These insights into the role of IFI16 in HSV-1 biology suggest that stabilization of IFI16 is an attractive avenue for antiviral drug development.

Veit Hornung,  Andrea Ablasser,  Marie Charrel-Dennis … (2009)
The innate immune system senses nucleic acids via germ-line encoded pattern recognition receptors. RNA is sensed via Toll-like receptor (TLR)−3, −7 and −8 or by the RNA helicases RIG-I and MDA-51. Little is known about sensors for cytoplasmic DNA which trigger antiviral and/or inflammatory responses2–6. The best characterized of these responses involves activation of the TANK-binding kinase (TBK1)-Interferon Regulatory Factor (IRF)-3 signaling axis to trigger transcriptional induction of IFN〈/® genes2,3. A second, less well-defined pathway leads to the activation of an ‘inflammasome’ which via caspase-1, controls the catalytic cleavage of the pro-forms of the cytokines IL-1β and IL-186,7. Here we identify the IFI20X/IFI16 (PYHIN) family member8, absent in melanoma 2 (AIM2), as a receptor for cytosolic DNA which regulates caspase-1. The HIN200 domain of AIM2 binds to DNA, while the PYD domain (but not that of the other PYHIN family members) associates with the adapter molecule ASC to activate both NF-κB and caspase-1. Knockdown of AIM2 abrogates caspase-1 activation in response to cytoplasmic dsDNA and the dsDNA virus, vaccinia. Collectively, these observations identify AIM2 as a novel receptor for cytoplasmic DNA, which forms an inflammasome with the ligand and ASC to activate caspase-1.

This study was supported in part by the Public Health Service grants CA 180758, and the Rosalind Franklin University of Medicine and Science H. M. Bligh Cancer Research Fund to BC. The funders had no role in study design, data collection and analysis, decision to publish, or preparation of the manuscript.

Data Availability The authors confirm that all data underlying the findings are fully available without restriction. All relevant data are within the paper.
Data availability:
ScienceOpen disciplines: Infectious disease & Microbiology