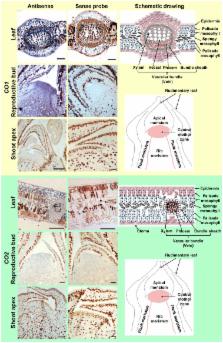 CONSTANS ( CO) is an important flowering-time gene in the photoperiodic flowering pathway of annual Arabidopsis thaliana in which overexpression of CO induces early flowering, whereas mutations in CO cause delayed flowering. The closest homologs of CO in woody perennial poplar ( Populus spp.) are CO1 and CO2. A previous report [1] showed that the CO2/ FLOWERING LOCUS T1 ( FT1) regulon controls the onset of reproduction in poplar, similar to what is seen with the CO/ FLOWERING LOCUS T ( FT) regulon in Arabidopsis. The CO2/ FT1 regulon was also reported to control fall bud set. Our long-term field observations show that overexpression of CO1 and CO2 individually or together did not alter normal reproductive onset, spring bud break, or fall dormancy in poplar, but did result in smaller trees when compared with controls. Transcripts of CO1 and CO2 were normally most abundant in the growing season and rhythmic within a day, peaking at dawn. Our manipulative experiments did not provide evidence for transcriptional regulation being affected by photoperiod, light intensity, temperature, or water stress when transcripts of CO1 and CO2 were consistently measured in the morning. A genetic network analysis using overexpressing trees, microarrays, and computation demonstrated that a majority of functionally known genes downstream of CO1 and CO2 are associated with metabolic processes, which could explain their effect on tree size. In conclusion, the function of CO1 and CO2 in poplar does not appear to overlap with that of CO from Arabidopsis, nor do our data support the involvement of CO1 and CO2 in spring bud break or fall bud set.

Masahiro Yano,  Yuichi Katayose,  Motoyuki Ashikari … (2000)
A major quantitative trait locus (QTL) controlling response to photoperiod, Hd1, was identified by means of a map-based cloning strategy. High-resolution mapping using 1505 segregants enabled us to define a genomic region of approximately 12 kb as a candidate for Hd1. Further analysis revealed that the Hd1 QTL corresponds to a gene that is a homolog of CONSTANS in Arabidopsis. Sequencing analysis revealed a 43-bp deletion in the first exon of the photoperiod sensitivity 1 (se1) mutant HS66 and a 433-bp insertion in the intron in mutant HS110. Se1 is allelic to the Hd1 QTL, as determined by analysis of two se1 mutants, HS66 and HS110. Genetic complementation analysis proved the function of the candidate gene. The amount of Hd1 mRNA was not greatly affected by a change in length of the photoperiod. We suggest that Hd1 functions in the promotion of heading under short-day conditions and in inhibition under long-day conditions.

Tao Huang,  Ove Nilsson,  Stefan Jansson … (2006)
Forest trees display a perennial growth behavior characterized by a multiple-year delay in flowering and, in temperate regions, an annual cycling between growth and dormancy. We show here that the CO/FT regulatory module, which controls flowering time in response to variations in daylength in annual plants, controls flowering in aspen trees. Unexpectedly, however, it also controls the short-day-induced growth cessation and bud set occurring in the fall. This regulatory mechanism can explain the ecogenetic variation in a highly adaptive trait: the critical daylength for growth cessation displayed by aspen trees sampled across a latitudinal gradient spanning northern Europe.

This work was funded by National Science Foundation grants DBI-0501890 (CY, GPP, and JEC) and IOS-0845834 (CY). JEC was also partially supported by the World Class University Project R31-2009-000-20025-0 funded by the Ministry of Education, Science, and Technology of South Korea. The funders had no role in study design, data collection and analysis, decision to publish, or preparation of the manuscript.