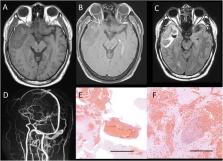 Bookmark
There is no author summary for this article yet. Authors can add summaries to their articles on ScienceOpen to make them more accessible to a non-specialist audience.
To the editor, The COVID-19 vaccine has become widely available worldwide due to the 2019 Coronavirus disease (COVID-19) pandemic. AstraZeneca's COVID-19 (ChAdOx1) vaccine has been known to cause vaccine-induced immune thrombotic thrombocytopenia (VITT), which is a medical term used to describe the development of low platelet counts following vaccination. In this paper, a case of a Taiwanese man with VITT-induced cerebral venous sinus thrombosis (CVST) was presented. 1  Through a multidisciplinary approach, that is, intravenous immune globulin (IVIG), anticoagulant therapy, plasmapheresis, and a minimally invasive surgical technique by mini-pterional (MPT) craniotomy, 2  we successfully treated this case. This 41-year-old Taiwanese man came to our institute with progressive headache and conscious disturbance. He received his first dose of the COVID-19 AstraZeneca vaccine 10 days prior to admission. A brain MR (magnetic resonance) angiography with venography showed right temporal intra-parenchymal hemorrhage, but no evidence of venous thrombosis (Fig. 1 A–D). The platelet counts of the patient were only 62x 109 (reference range: 150–400 (109/L)) Fig. 1 Magnetic resonance (MR) imaging of patient with vaccine induced cerebral venous thrombosis. On T1 pre-contrast (A), post-contrast MR image (B) with hypointense signal change and hyperintensity of T2 FLAIR signal (C) indicated acute hemorrhage accident at right temporal base area. The Post contrast enhanced MR venography did not detect venous sinus thrombosis (D). Histopathology indicated (E) multiple hemorrhage lesions, Hematoxylin–eosin (H&E) stain, scale bar: 2 mm; (F) organization of a thrombus, scale bar: 200μm (H&E). Fig. 1 The patient underwent a right-side mini-pterional craniotomy to remove the hematoma after admission due to an ipsilateral dilated pupil from impending brain herniation. Postoperative computed tomography (CT) scan indicated a new onset of left frontal hemorrhage which was not life threatening. Due to persistent low platelet count, the patient received another course of plasmapheresis for 7 days. Systemic corticosteroids were also subsequently prescribed. The result of anti-platelet factor 4 antibody assessment was positive, which proved the diagnosis of VITT. The pathology report confirmed the diagnosis of CVST (Fig. 1E and F). The patient discharged with a good outcome (modified Rankin Scale = 1). Several cases of VITT induced CVST after adenoviral vector COVID-19 vaccines have been reported with a high mortality rate of about 40–50%, which is more significant than other type of CVST. 1 , 3  The mechanism of VITT is similar to that of heparin-induced thrombocytopenia (HIT). The mainstream treatments for patients with vaccine induced CVST are high-dose IVIG with anticoagulation using direct oral anticoagulants (DOAC) or alternative anticoagulants to heparin including argatroban. 1  Decompressive craniectomy should be considered if there is an occupying cerebral edema or brain hemorrhage. 4 , 5  In this case, it was believed that early craniotomy for hematoma removal under MPT craniotomy can achieve equivalent results and can prevent further surgical mobility by large craniectomy wound in patient with coagulopathy. Though mortality rate of CVST after COVID-19 vaccination is high, early surgical treatment for intracranial hemorrhage using minimally invasive surgical techniques, in combination with the best medical care, may improve clinical outcomes.

Mark C. Preul, Marcelo Crusius, Peter Nakaji … (2007)
To describe a modification of the pterional approach (PT), the minipterional craniotomy (MPT), and compare the anatomic exposure provided by these two approaches. The anatomic exposure offered by the MPT and PT were compared in eight sides of cadaver heads using a computerized tracking system, a robotic microscope, and an image-guidance system. The area of surgical exposure, angular exposure, and anatomic limits of each craniotomy were evaluated. Three recently operated clinical cases (EGF) are also reported. There were no statistical differences in the total area of surgical exposure between the two craniotomies (PT, 1524.7 +/- 305 mm; MPT, 1469.7 +/- 380.3 mm; P > 0.05) or among the ipsilateral, middle, and contralateral components of the area (P > 0.05). There were no differences in angular exposure along the longitudinal and transverse axis angles for the three selected targets, the bifurcations of internal carotid and middle cerebral arteries, and the anterior communicating artery (P > 0.05). Except for the distal portion of the operculoinsular compartment of the sylvian fissure, no significant differences in the limits of the surgical exposure through the PT and MPT were apparent on the image-guidance system. The MPT craniotomy provides comparable surgical exposure to that offered by the PT. The advantages of the MPT include reduction of tissue trauma and bony removal, a decrease in surgical time, and improved cosmetic outcomes.