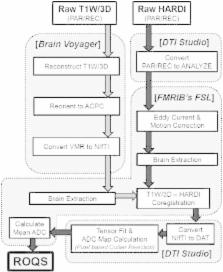 Autism spectrum disorder (ASD) has been characterized by atypical socio-communicative behavior, sensorimotor impairment and abnormal neurodevelopmental trajectories. DTI has been used to determine the presence and nature of abnormality in white matter integrity that may contribute to the behavioral phenomena that characterize ASD. Although atypical patterns of sensory responding in ASD are well documented in the behavioral literature, much less is known about the neural networks associated with aberrant sensory processing. To address the roles of basic sensory, sensory association and early attentional processes in sensory responsiveness in ASD, our investigation focused on five white matter fiber tracts known to be involved in these various stages of sensory processing: superior corona radiata, centrum semiovale, inferior longitudinal fasciculus, posterior limb of the internal capsule, and splenium. We acquired high angular resolution diffusion images from 32 children with ASD and 26 typically developing children between the ages of 5 and 8. We also administered sensory assessments to examine brain-behavior relationships between white matter integrity and sensory variables. Our findings suggest a modulatory role of the inferior longitudinal fasciculus and splenium in atypical sensorimotor and early attention processes in ASD. Increased tactile defensiveness was found to be related to reduced fractional anisotropy in the inferior longitudinal fasciculus, which may reflect an aberrant connection between limbic structures in the temporal lobe and the inferior parietal cortex. Our findings also corroborate the modulatory role of the splenium in attentional orienting, but suggest the possibility of a more diffuse or separable network for social orienting in ASD. Future investigation should consider the use of whole brain analyses for a more robust assessment of white matter microstructure.

The activation of attentional networks.

John Fossella,  Jin Fan,  Bruce D. McCandliss … (2005)
Alerting, orienting, and executive control are widely thought to be relatively independent aspects of attention that are linked to separable brain regions. However, neuroimaging studies have yet to examine evidence for the anatomical separability of these three aspects of attention in the same subjects performing the same task. The attention network test (ANT) examines the effects of cues and targets within a single reaction time task to provide a means of exploring the efficiency of the alerting, orienting, and executive control networks involved in attention. It also provides an opportunity to examine the brain activity of these three networks as they operate in a single integrated task. We used event-related functional magnetic resonance imaging (fMRI) to explore the brain areas involved in the three attention systems targeted by the ANT. The alerting contrast showed strong thalamic involvement and activation of anterior and posterior cortical sites. As expected, the orienting contrast activated parietal sites and frontal eye fields. The executive control network contrast showed activation of the anterior cingulate along with several other brain areas. With some exceptions, activation patterns of these three networks within this single task are consistent with previous fMRI studies that have been studied in separate tasks. Overall, the fMRI results suggest that the functional contrasts within this single task differentially activate three separable anatomical networks related to the components of attention.

Jay Giedd (2004)
Magnetic resonance imaging (MRI) provides accurate anatomical brain images without the use of ionizing radiation, allowing longitudinal studies of brain morphometry during adolescent development. Results from an ongoing brain imaging project being conducted at the Child Psychiatry Branch of the National Institute of Mental Health indicate dynamic changes in brain anatomy throughout adolescence. White matter increases in a roughly linear pattern, with minor differences in slope in the four major lobes (frontal, parietal, temporal, occipital). Cortical gray matter follows an inverted U-shape developmental course with greater regional variation than white matter. For instance, frontal gray matter volume peaks at about age 11.0 years in girls and 12.1 years in boys, whereas temporal gray matter volume peaks at about age at 16.7 years in girls and 16.2 years in boys. The dorsal lateral prefrontal cortex, important for controlling impulses, is among the latest brain regions to mature without reaching adult dimensions until the early 20s. The details of the relationships between anatomical changes and behavioral changes, and the forces that influence brain development, have not been well established and remain a prominent goal of ongoing investigations.