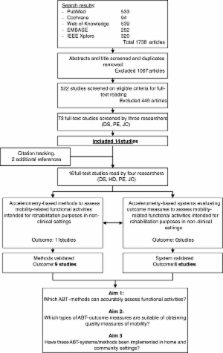 Journal: Journal of NeuroEngineering and Rehabilitation

Integrating rehabilitation services through wearable systems has the potential to accurately assess the type, intensity, duration, and quality of movement necessary for procuring key outcome measures.

This review aims to explore wearable accelerometry-based technology (ABT) capable of assessing mobility-related functional activities intended for rehabilitation purposes in community settings for neurological populations. In this review, we focus on the accuracy of ABT-based methods, types of outcome measures, and the implementation of ABT in non-clinical settings for rehabilitation purposes.

Potentially relevant studies were categorized as systems either evaluating methods or outcome parameters.

Methodological qualities of studies were assessed by two customized checklists, depending on their categorization and rated independently by three blinded reviewers.

Twelve studies involving ABT met the eligibility criteria, of which three studies were identified as having implemented ABT for rehabilitation purposes in non-clinical settings. From the twelve studies, seven studies achieved high methodological quality scores. These studies were not only capable of assessing the type, quantity, and quality measures of functional activities, but could also distinguish healthy from non-healthy subjects and/or address disease severity levels.

While many studies support ABT’s potential for telerehabilitation, few actually utilized it to assess mobility-related functional activities outside laboratory settings. To generate more appropriate outcome measures, there is a clear need to translate research findings and novel methods into practice.

Bridging the gap between prevention research and practice: the interactive systems framework for dissemination and implementation.

Keri M Lubell,  Morris Blachman,  Richard Dunville … (2008)
If we keep on doing what we have been doing, we are going to keep on getting what we have been getting. Concerns about the gap between science and practice are longstanding. There is a need for new approaches to supplement the existing approaches of research to practice models and the evolving community-centered models for bridging this gap. In this article, we present the Interactive Systems Framework for Dissemination and Implementation (ISF) that uses aspects of research to practice models and of community-centered models. The framework presents three systems: the Prevention Synthesis and Translation System (which distills information about innovations and translates it into user-friendly formats); the Prevention Support System (which provides training, technical assistance or other support to users in the field); and the Prevention Delivery System (which implements innovations in the world of practice). The framework is intended to be used by different types of stakeholders (e.g., funders, practitioners, researchers) who can use it to see prevention not only through the lens of their own needs and perspectives, but also as a way to better understand the needs of other stakeholders and systems. It provides a heuristic for understanding the needs, barriers, and resources of the different systems, as well as a structure for summarizing existing research and for illuminating priority areas for new research and action.

K. Aminian,  B Najafi,  C Büla … (2002)
In this study we describe an ambulatory system for estimation of spatio-temporal parameters during long periods of walking. This original method based on wavelet analysis is proposed to compute the values of temporal gait parameters from the angular velocity of lower limbs. Based on a mechanical model, the medio-lateral rotation of the lower limbs during stance and swing, the stride length and velocity are estimated by integration of the angular velocity. Measurement's accuracy was assessed using as a criterion standard the information provided by foot pressure sensors. To assess the accuracy of the method on a broad range of performance for each gait parameter, we gathered data from young and elderly subjects. No significant error was observed for toe-off detection, while a slight systematic delay (10 ms on average) existed between heelstrike obtained from gyroscopes and footswitch. There was no significant difference between actual spatial parameters (stride length and velocity) and their estimated values. Errors for velocity and stride length estimations were 0.06 m/s and 0.07 m, respectively. This system is light, portable, inexpensive and does not provoke any discomfort to subjects. It can be carried for long periods of time, thus providing new longitudinal information such as stride-to-stride variability of gait. Several clinical applications can be proposed such as outcome evaluation after total knee or hip replacement, external prosthesis adjustment for amputees, monitoring of rehabilitation progress, gait analysis in neurological diseases, and fall risk estimation in elderly.

B Najafi,  K. Aminian,  A. Paraschiv-Ionescu … (2003)
A new method of physical activity monitoring is presented, which is able to detect body postures (sitting, standing, and lying) and periods of walking in elderly persons using only one kinematic sensor attached to the chest. The wavelet transform, in conjunction with a simple kinematics model, was used to detect different postural transitions (PTs) and walking periods during daily physical activity. To evaluate the system, three studies were performed. The method was first tested on 11 community-dwelling elderly subjects in a gait laboratory where an optical motion system (Vicon) was used as a reference system. In the second study, the system was tested for classifying PTs (i.e., lying-to-sitting, sitting-to-lying, and turning the body in bed) in 24 hospitalized elderly persons. Finally, in a third study monitoring was performed on nine elderly persons for 45-60 min during their daily physical activity. Moreover, the possibility-to-perform long-term monitoring over 12 h has been shown. The first study revealed a close concordance between the ambulatory and reference systems. Overall, subjects performed 349 PTs during this study. Compared with the reference system, the ambulatory system had an overall sensitivity of 99% for detection of the different PTs. Sensitivities and specificities were 93% and 82% in sit-to-stand, and 82% and 94% in stand-to-sit, respectively. In both first and second studies, the ambulatory system also showed a very high accuracy (> 99%) in identifying the 62 transfers or rolling out of bed, as well as 144 different posture changes to the back, ventral, right and left sides. Relatively high sensitivity (> 90%) was obtained for the classification of usual physical activities in the third study in comparison with visual observation. Sensitivities and specificities were, respectively, 90.2% and 93.4% in sitting, 92.2% and 92.1% in "standing + walking," and, finally, 98.4% and 99.7% in lying. Overall detection errors (as percent of range) were 3.9% for "standing + walking," 4.1% for sitting, and 0.3% for lying. Finally, overall symmetric mean average errors were 12% for "standing + walking," 8.2% for sitting, and 1.3% for lying.