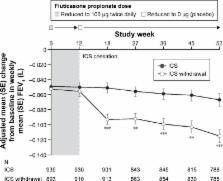 The WISDOM study (NCT00975195) reported a change in lung function following withdrawal of fluticasone propionate in patients with severe to very severe COPD treated with tiotropium and salmeterol. However, little is known about the validity of home-based spirometry measurements of lung function in COPD. Therefore, as part of this study, following suitable training, patients recorded daily home-based spirometry measurements in addition to undergoing periodic in-clinic spirometric testing throughout the study duration. We subsequently determined the validity of home-based spirometry for detecting changes in lung function by comparing in-clinic and home-based forced expiratory volume in 1 second in patients who underwent stepwise fluticasone propionate withdrawal over 12 weeks versus patients remaining on fluticasone propionate for 52 weeks. Bland–Altman analysis of these data confirmed good agreement between in-clinic and home-based measurements, both across all visits and at the individual visits at study weeks 6, 12, 18, and 52. There was a measurable difference between the forced expiratory volume in 1 second values recorded at home and in the clinic (mean difference of −0.05 L), which may be due to suboptimal patient effort in performing unsupervised recordings. However, this difference remained consistent over time. Overall, these data demonstrate that home-based and in-clinic spirometric measurements were equally valid and reliable for assessing lung function in patients with COPD, and suggest that home-based spirometry may be a useful tool to facilitate analysis of changes in lung function on a day-to-day basis.

Bronchodilator reversibility in chronic obstructive pulmonary disease: use and limitations.

Peter M A Calverley,  David Walker,  Paul-Albert Koenig (2013)
The change in forced expiratory volume in 1 s (FEV1) after administration of a short-acting bronchodilator has been widely used to identify patients with chronic obstructive pulmonary disease (COPD) who have a potentially different disease course and response to treatment. Despite the apparent simplicity of the test, it is difficult to interpret or rely on. Test performance is affected by the day of testing, the severity of baseline lung-function impairment, and the number of drugs given to test. Recent data suggest that the response to bronchodilators is not enhanced in patients with COPD and does not predict clinical outcomes. In this Review we will discuss the insight that studies of bronchodilator reversibility have provided into the nature of the COPD, and how the abnormal physiology seen in patients with this disorder can be interpreted. Copyright © 2013 Elsevier Ltd. All rights reserved.

J Vestbo,  R Pauwels,  Simon P. Jones … (2005)
Combined treatment with inhaled corticosteroids and long acting beta2 agonists is approved for the treatment of chronic obstructive pulmonary disease (COPD), but little is known about the onset of effect of the combination. Data were used from 1465 patients with COPD entered into a large 1 year double blind trial with daily measurements of peak expiratory flow (PEF) and symptom scores. PEF was significantly higher after 1 day in patients treated with salmeterol 50 microg twice daily or the salmeterol/fluticasone propionate combination 50/500 microg twice daily than placebo. In patients treated with fluticasone propionate 500 microg twice daily alone, PEF differed from placebo after 2 days. The differences after 2 weeks compared with placebo were 16 l/min (95% confidence interval (CI) 11 to 21), 11 l/min (95% CI 6 to 16), and 27 l/min (95% CI 22 to 33) for salmeterol, fluticasone propionate, and the salmeterol/fluticasone propionate combination, respectively. For all treatments the effect on PEF after 2 weeks was comparable to that seen at the end of the study. The difference between the salmeterol/fluticasone propionate combination and placebo after 2 weeks as a percentage of baseline was similar for PEF and clinic forced expiratory volume in 1 second (FEV1). Differences in breathlessness scores were statistically significant after 1 day for the group treated with salmeterol alone and after 2 days for the combination group. The 2 week change in FEV1 was only partly indicative of a long term response in individual patients. The effects of salmeterol and fluticasone propionate, alone or in combination, on PEF and breathlessness are seen within days and most of the obtainable effect on these parameters is reached within 2 weeks.