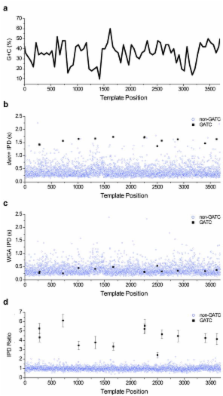 We describe the direct detection of DNA methylation, without bisulfite conversion, through single-molecule real-time (SMRT) sequencing. In SMRT sequencing, DNA polymerases catalyze the incorporation of fluorescently labeled nucleotides into complementary nucleic acid strands. The arrival times and durations of the resulting fluorescence pulses yield information about polymerase kinetics and allow direct detection of modified nucleotides in the DNA template, including N6-methyladenosine, 5-methylcytosine, and 5-hydroxymethylcytosine. Measurement of polymerase kinetics is an intrinsic part of SMRT sequencing and does not adversely affect determination of the primary DNA sequence. The various modifications affect polymerase kinetics differently, allowing discrimination between them. We utilize these kinetic signatures to identify adenosine methylation in genomic samples and show that, in combination with circular consensus sequencing, they can enable single-molecule identification of epigenetic modifications with base-pair resolution. This method is amenable to long read lengths and will likely enable mapping of methylation patterns within even highly repetitive genomic regions.

L Aravind,  Suneet Agarwal,  Richard Pastor … (2009)
DNA cytosine methylation is crucial for retrotransposon silencing and mammalian development. In a computational search for enzymes that could modify 5-methylcytosine (5mC), we identified TET proteins as mammalian homologs of the trypanosome proteins JBP1 and JBP2, which have been proposed to oxidize the 5-methyl group of thymine. We show here that TET1, a fusion partner of the MLL gene in acute myeloid leukemia, is a 2-oxoglutarate (2OG)- and Fe(II)-dependent enzyme that catalyzes conversion of 5mC to 5-hydroxymethylcytosine (hmC) in cultured cells and in vitro. hmC is present in the genome of mouse embryonic stem cells, and hmC levels decrease upon RNA interference-mediated depletion of TET1. Thus, TET proteins have potential roles in epigenetic regulation through modification of 5mC to hmC.

Ryan Lister,  Gary Hon,  Robert H. Dowen … (2010)
DNA cytosine methylation is a central epigenetic modification that has essential roles in cellular processes including genome regulation, development and disease. Here we present the first genome-wide, single-base-resolution maps of methylated cytosines in a mammalian genome, from both human embryonic stem cells and fetal fibroblasts, along with comparative analysis of messenger RNA and small RNA components of the transcriptome, several histone modifications, and sites of DNA-protein interaction for several key regulatory factors. Widespread differences were identified in the composition and patterning of cytosine methylation between the two genomes. Nearly one-quarter of all methylation identified in embryonic stem cells was in a non-CG context, suggesting that embryonic stem cells may use different methylation mechanisms to affect gene regulation. Methylation in non-CG contexts showed enrichment in gene bodies and depletion in protein binding sites and enhancers. Non-CG methylation disappeared upon induced differentiation of the embryonic stem cells, and was restored in induced pluripotent stem cells. We identified hundreds of differentially methylated regions proximal to genes involved in pluripotency and differentiation, and widespread reduced methylation levels in fibroblasts associated with lower transcriptional activity. These reference epigenomes provide a foundation for future studies exploring this key epigenetic modification in human disease and development.

Correspondence should be addressed to S.W.T. ( sturner@ 123456pacificbiosciences.com )