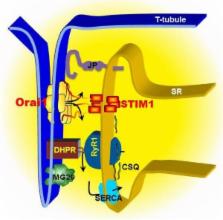 Ca 2+ release from intracellular stores and influx from extracellular reservoir regulate a wide range of physiological functions including muscle contraction and rhythmic heartbeat. One of the most ubiquitous pathways involved in controlled Ca 2+ influx into cells is store-operated Ca 2+ entry (SOCE), which is activated by the reduction of Ca 2+ concentration in the lumen of endoplasmic or sarcoplasmic reticulum (ER/SR). Although SOCE is pronounced in non-excitable cells, accumulating evidences highlight its presence and important roles in skeletal muscle and heart. Recent discovery of STIM proteins as ER/SR Ca 2+ sensors and Orai proteins as Ca 2+ channel pore forming unit expedited the mechanistic understanding of this pathway. This review focuses on current advances of SOCE components, regulation and physiologic and pathophysiologic roles in muscles. The specific property and the dysfunction of this pathway in muscle diseases, and new directions for future research in this rapidly growing field are discussed. [BMB Reports 2014; 47(2): 69-79]

H Westerblad,  Damon G. Lamb,  Kenneth G D Allen (2007)
Repeated, intense use of muscles leads to a decline in performance known as muscle fatigue. Many muscle properties change during fatigue including the action potential, extracellular and intracellular ions, and many intracellular metabolites. A range of mechanisms have been identified that contribute to the decline of performance. The traditional explanation, accumulation of intracellular lactate and hydrogen ions causing impaired function of the contractile proteins, is probably of limited importance in mammals. Alternative explanations that will be considered are the effects of ionic changes on the action potential, failure of SR Ca2+ release by various mechanisms, and the effects of reactive oxygen species. Many different activities lead to fatigue, and an important challenge is to identify the various mechanisms that contribute under different circumstances. Most of the mechanistic studies of fatigue are on isolated animal tissues, and another major challenge is to use the knowledge generated in these studies to identify the mechanisms of fatigue in intact animals and particularly in human diseases.

STIM is a Ca2+ sensor essential for Ca2+-store-depletion-triggered Ca2+ influx.

Eugene Myers,  Won Do Heo,  Jen Liou … (2005)
Ca(2+) signaling in nonexcitable cells is typically initiated by receptor-triggered production of inositol-1,4,5-trisphosphate and the release of Ca(2+) from intracellular stores. An elusive signaling process senses the Ca(2+) store depletion and triggers the opening of plasma membrane Ca(2+) channels. The resulting sustained Ca(2+) signals are required for many physiological responses, such as T cell activation and differentiation. Here, we monitored receptor-triggered Ca(2+) signals in cells transfected with siRNAs against 2,304 human signaling proteins, and we identified two proteins required for Ca(2+)-store-depletion-mediated Ca(2+) influx, STIM1 and STIM2. These proteins have a single transmembrane region with a putative Ca(2+) binding domain in the lumen of the endoplasmic reticulum. Ca(2+) store depletion led to a rapid translocation of STIM1 into puncta that accumulated near the plasma membrane. Introducing a point mutation in the STIM1 Ca(2+) binding domain resulted in prelocalization of the protein in puncta, and this mutant failed to respond to store depletion. Our study suggests that STIM proteins function as Ca(2+) store sensors in the signaling pathway connecting Ca(2+) store depletion to Ca(2+) influx.

Bogdan Tanasa,  Sven-Holger Puppel,  Stefan Feske … (2006)
Antigen stimulation of immune cells triggers Ca2+ entry through Ca2+ release-activated Ca2+ (CRAC) channels, promoting the immune response to pathogens by activating the transcription factor NFAT. We have previously shown that cells from patients with one form of hereditary severe combined immune deficiency (SCID) syndrome are defective in store-operated Ca2+ entry and CRAC channel function. Here we identify the genetic defect in these patients, using a combination of two unbiased genome-wide approaches: a modified linkage analysis with single-nucleotide polymorphism arrays, and a Drosophila RNA interference screen designed to identify regulators of store-operated Ca2+ entry and NFAT nuclear import. Both approaches converged on a novel protein that we call Orai1, which contains four putative transmembrane segments. The SCID patients are homozygous for a single missense mutation in ORAI1, and expression of wild-type Orai1 in SCID T cells restores store-operated Ca2+ influx and the CRAC current (I(CRAC)). We propose that Orai1 is an essential component or regulator of the CRAC channel complex.

This is an open-access article distributed under the terms of the Creative Commons Attribution Non-Commercial License ( http://creativecommons.org/licenses/by-nc/3.0) which permits unrestricted non-commercial use, distribution, and reproduction in any medium, provided the original work is properly cited.