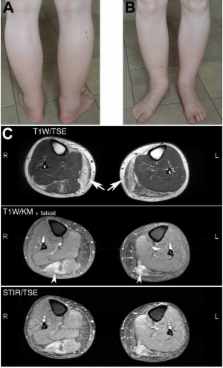 Miyoshi myopathy, a type of distal myopathy with predominant involvement of the posterior calf muscles, has been assigned to mutations in the dysferlin gene. However, many of the late-onset limb-girdle and distal myopathies that resemble dysferlinopathy or Miyoshi myopathy remain unclassified, even after extensive immunohistological and genetic analysis.

We report the case of a 59-year-old Caucasian man with distal myopathy and exercise-induced myalgia, preferentially of the leg muscles, closely resembling the Miyoshi phenotype. Magnetic resonance imaging of his calf muscles showed typical fatty replacement of the medial heads of the gastrocnemius muscles and soleus muscles, with progression to the adductor longus muscles over a time course of two years. However, genetic analysis revealed that the phenotype of our patient was not related to a mutation in the dysferlin gene but to a novel homozygous splice mutation in the anoctamin 5 gene. Mutations in the anoctamin 5 gene have so far been identified only in some cases of limb-girdle and distal myopathy. Mutations in the anoctamin 5 gene have been assigned to limb-girdle muscular dystrophy type 2L, while distal Miyoshi-like phenotypes have been classified as Miyoshi myopathy type 3.

The case presented in this report further strengthens the underlying genetic heterogeneity in Miyoshi myopathy-like phenotypes and adds another family to non-dysferlin, Miyoshi myopathy type 3 of late-onset. Furthermore, our case supports the recent observation that anoctamin 5 mutations are a primary cause of distal non-dysferlin myopathies. Therefore, given the increasing number of anoctamin 5 mutations in Miyoshi-like phenotypes, genetic analysis should include an anoctamin 5 screen in late-onset limb-girdle and distal myopathies.

L Passos,  Ryan Strachan,  E Vafiadaki … (1998)
The limb-girdle muscular dystrophies are a genetically heterogeneous group of inherited progressive muscle disorders that affect mainly the proximal musculature, with evidence for at least three autosomal dominant and eight autosomal recessive loci. The latter mostly involve mutations in genes encoding components of the dystrophin-associated complex; another form is caused by mutations in the gene for the muscle-specific protease calpain 3. Using a positional cloning approach, we have identified the gene for a form of limb-girdle muscular dystrophy that we previously mapped to chromosome 2p13 (LGMD2B). This gene shows no homology to any known mammalian gene, but its predicted product is related to the C. elegans spermatogenesis factor fer-1. We have identified two homozygous frameshift mutations in this gene, resulting in muscular dystrophy of either proximal or distal onset in nine families. The proposed name 'dysferlin' combines the role of the gene in producing muscular dystrophy with its C. elegans homology.

Véronique Bolduc,  Gareth Marlow,  Kym M Boycott … (2010)
The recently described human anion channel Anoctamin (ANO) protein family comprises at least ten members, many of which have been shown to correspond to calcium-activated chloride channels. To date, the only reported human mutations in this family of genes are dominant mutations in ANO5 (TMEM16E, GDD1) in the rare skeletal disorder gnathodiaphyseal dysplasia. We have identified recessive mutations in ANO5 that result in a proximal limb-girdle muscular dystrophy (LGMD2L) in three French Canadian families and in a distal non-dysferlin Miyoshi myopathy (MMD3) in Dutch and Finnish families. These mutations consist of a splice site, one base pair duplication shared by French Canadian and Dutch cases, and two missense mutations. The splice site and the duplication mutations introduce premature-termination codons and consequently trigger nonsense-mediated mRNA decay, suggesting an underlining loss-of-function mechanism. The LGMD2L phenotype is characterized by proximal weakness, with prominent asymmetrical quadriceps femoris and biceps brachii atrophy. The MMD3 phenotype is associated with distal weakness, of calf muscles in particular. With the use of electron microscopy, multifocal sarcolemmal lesions were observed in both phenotypes. The phenotypic heterogeneity associated with ANO5 mutations is reminiscent of that observed with Dysferlin (DYSF) mutations that can cause both LGMD2B and Miyoshi myopathy (MMD1). In one MMD3-affected individual, defective membrane repair was documented on fibroblasts by membrane-resealing ability assays, as observed in dysferlinopathies. Though the function of the ANO5 protein is still unknown, its putative calcium-activated chloride channel function may lead to important insights into the role of deficient skeletal muscle membrane repair in muscular dystrophies. Copyright (c) 2010 The American Society of Human Genetics. Published by Elsevier Inc. All rights reserved.

A founder mutation in Anoctamin 5 is a major cause of limb-girdle muscular dystrophy.

Richard Miller,  Steven H. Laval,  R. Roberts … (2010)
The limb-girdle muscular dystrophies are a group of disorders with wide genetic and clinical heterogeneity. Recently, mutations in the ANO5 gene, which encodes a putative calcium-activated chloride channel belonging to the Anoctamin family of proteins, were identified in five families with one of two previously identified disorders, limb-girdle muscular dystrophy 2L and non-dysferlin Miyoshi muscular dystrophy. We screened a candidate group of 64 patients from 59 British and German kindreds and found the truncating mutation, c.191dupA in exon 5 of ANO5 in 20 patients, homozygously in 15 and in compound heterozygosity with other ANO5 variants in the rest. An intragenic single nucleotide polymorphism and an extragenic microsatellite marker are in linkage disequilibrium with the mutation, suggesting a founder effect in the Northern European population. We have further defined the clinical phenotype of ANO5-associated muscular dystrophy. Patients show adult onset proximal lower limb weakness with highly raised serum creatine kinase values (average 4500 IU/l) and frequent muscle atrophy and asymmetry of muscle involvement. Onset varies from the early 20 s to 50 s and the weakness is generally slowly progressive, with most patients remaining ambulant for several decades. Distal presentation is much less common but a milder degree of distal lower limb weakness is often observed. Upper limb strength is only mildly affected and cardiac and respiratory function is normal. Females appear less frequently affected. In the North of England population we have identified eight patients with ANO5 mutations, suggesting a minimum prevalence of 0.27/100,000, twice as common as dysferlinopathy. We suggest that mutations in ANO5 represent a relatively common cause of adult onset muscular dystrophy with high serum creatine kinase and that mutation screening, particularly of the common mutation c.191dupA, should be an early step in the diagnostic algorithm of adult limb-girdle muscular dystrophy patients.