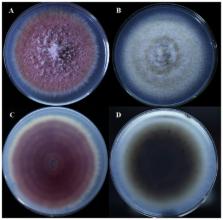 Bamboos, regarded as therapeutic agents in ethnomedicine, have been used to inhibit inflammation and enhance natural immunity for a long time in Asia, and there are many bamboo associated fungi with medical and edible value. In the present study, a total of 350 fungal strains were isolated from the uncommon moso bamboo ( Phyllostachys edulis) seeds for the first time. The molecular diversity of these endophytic fungi was investigated and bioactive compound producers were screened for the first time. All the fungal endophytes were categorized into 69 morphotypes according to culturable characteristics and their internal transcriber spacer (ITS) regions were analyzed by BLAST search with the NCBI database. The fungal isolates showed high diversity and were divided in Ascomycota (98.0%) and Basidiomycota (2.0%), including at least 19 genera in nine orders. Four particular genera were considered to be newly recorded bambusicolous fungi, including Leptosphaerulina, Simplicillium, Sebacina and an unknown genus in Basidiomycetes. Furthermore, inhibitory effects against clinical pathogens and phytopathogens were screened preliminarily and strains B09 ( Cladosporium sp.), B34 ( Curvularia sp.), B35 (undefined genus 1), B38 ( Penicillium sp.) and zzz816 ( Shiraia sp.) displayed broad-spectrum activity against clinical bacteria and yeasts by the agar diffusion method. The crude extracts of isolates B09, B34, B35, B38 and zzz816 under submerged fermentation, also demonstrated various levels of bioactivities against bambusicolous pathogenic fungi. This study is the first report on the antimicrobial activity of endophytic fungi associated with moso bamboo seeds, and the results show that they could be exploited as a potential source of bioactive compounds and plant defense activators. In addition, it is the first time that strains of Shiraia sp. have been isolated and cultured from moso bamboo seeds, and one of them (zzz816) could produce hypocrellin A at high yield, which is significantly different from the other strains published.

Applied use of fungi

Taxol and taxane production by Taxomyces andreanae, an endophytic fungus of Pacific yew.

A Stierle, G Strobel, D Stierle (1993)
Taxomyces andreanae, a fungal endophyte, was isolated from the phloem (inner bark) of the Pacific yew, Taxus brevifolia. The fungus is hyphomyceteous and, when grown in a semi-synthetic liquid medium, produced taxol and related compounds. Taxol was identified by mass spectrometry, chromatography, and reactivity with monoclonal antibodies specific for taxol. Both [1-14C]acetic acid and L-[U-14C]phenylalanine served as precursors of [14C]taxol in fungal cultures. No taxol was detected in zero-time cultures or in the small agar plugs used to inoculate the culture flasks.

Stanley H. Faeth, William Fagan (2002)
Fungal endophytes are extremely common and highly diverse microorganisms that live within plant tissues, but usually remain asymptomatic. Endophytes traditionally have been considered plant mutualists, mainly by reducing herbivory via production of mycotoxins, such as alkaloids. However, the vast majority of endophytes, especially horizontally-transmitted ones commonly found in woody plants, apparently have little or no effect on herbivores. For the systemic, vertically-transmitted endophytes of grasses, mutualistic interactions via increased resistance to herbivores and pathogens are more common, as predicted by evolutionary theory. However, even in these obligate symbioses, endophytes are often neutral or even pathogenic to the host grass, depending on endophyte and plant genotype and environmental conditions.We present a graphical model based upon variation in nitrogen flux in the host plant. Nitrogen is a common currency in endophyte/host and plant/herbivore interactions in terms of limitations to host plant growth, enhanced uptake by endophytes, demand for synthesis of nitrogen-rich alkaloids, and herbivore preference and performance. Our graphical model predicts that low alkaloid-producing endophytes should persist in populations when soil nutrients and herbivory are low. Alternatively, high alkaloid endophytes are favored under increasing herbivory and increasing soil nitrogen, at least to some point. At very high soil nitrogen levels, uninfected plants may be favored over either type of infected plants. These predictions are supported by patterns of infection and alkaloid production in nature, as well by a manipulative field experiment. However, plant genotype and other environmental factors, such as available water, interact with the presence of the endophyte to influence host plant performance.

Fungal endophytes in seeds and needles of Pinus monticola.

Robert G Newcombe, Kathleen Ganley (2006)
Using a sequence-based approach, we investigated the transmission of diverse fungal endophytes in seed and needles of Pinus monticola, western white pine. We isolated 2003 fungal endophytes from 750 surface-sterilized needles. In contrast, only 16 endophytic isolates were obtained from 800 surface-sterilized seeds. The ITS region was sequenced from a representative selection of these endophytes. Isolates were then assigned to the most closely related taxa in GenBank. Although 95% of the endophytes in needles from mature trees belonged to the Rhytismataceae, 82 unique ITS sequences were obtained from at least 21 genera and 10 different orders of fungi. Significantly, none of the endophytes in seed were rhytismataceous (chi(2) = 180; P < 0.001). Similarly, needles of greenhouse seedlings yielded only non-rhytismataceous isolates, whereas seedlings of the same age that had naturally regenerated near older white pines in roadless areas were colonized by rhytismataceous endophytes almost to the same extent as in mature trees. Only one of 17 rhytismataceous isolates were able to grow on a medium containing only 0.17% nitrogen, whereas 25 of 31 non-rhytismataceous endophytes grew. Rhytismataceous endophytes are dominant in needles of P. monticola, but they appear to be absent in seed, and unlikely colonists of nitrogen-limiting host tissues such as the apoplast.

This study was supported by Key Program of Science and Technology Development Project of Beijing Municipal Education Commission (KZ201110028036), The “Twelfth Five-Year Plan” of National Science and Technology Support Project (2012BAD23B0503), National Nature Science Foundation of China (No. 31170019), and Beijing Natural Science Foundation (5133033 and 5132009). The funders had no role in study design, data collection and analysis, decision to publish, or preparation of the manuscript.