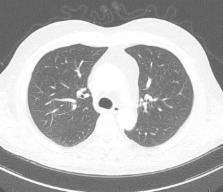 Cushing’s syndrome is a rare disease that results from prolonged exposure to supraphysiological levels of glucocorticoids. Severe and rapidly progressive cases are often, but not exclusively, attributable to ectopic ACTH secretion. Extreme hypercortisolism usually has florid metabolic consequences and is associated with an increased infectious and thrombotic risk. The authors report on a case of a 51-year-old male that presented with severe Cushing’s syndrome secondary to an ACTH-secreting pituitary macroadenoma, whose diagnostic workup was affected by concurrent subclinical multifocal pulmonary infectious nodules. The case is noteworthy for the atypically severe presentation of Cushing’s disease, and it should remind the clinician of the possible infectious and thrombotic complications associated with Cushing’s syndrome.

M Luciano,  Michael Hall,  J Doppman … (1994)
To determine the prevalence of focal lesions of the pituitary gland that suggest the presence of a pituitary adenoma in asymptomatic persons. 100 normal volunteers (70 women, 30 men; age range, 18 to 60 years old) were studied by high-resolution magnetic resonance imaging (MRI) of the pituitary gland before and after administration of gadolinium-diethylenetriaminepentaacetic acid (Gd-DTPA). Occult pituitary adenomas are identified at autopsy in 3% to 27% of unselected asymptomatic patients. The frequency of incidental pituitary adenomas detected by MRI in normal persons is unknown. The MRI scans from volunteers were randomly mixed with scans of 57 patients with Cushing disease and interpreted independently by three blinded reviewers. Seven women (10%) and three men (10%) had focal areas of decreased signal intensity in the pituitary gland after administration of Gd-DTPA. The lesions ranged from 3 to 6 mm in greatest diameter and were diagnosed as pituitary adenomas by at least two of the three reviewers. When similar lesions were detected on MRI scans in patients with Cushing disease, the positive predictive value for identification of an adenoma at that site was 86%. About 10% of the normal adult population have pituitary abnormalities on MRI scans that are compatible with the diagnosis of asymptomatic pituitary adenomas. Most pituitary adenomas remain asymptomatic and do not require treatment.

Alexander W. Tucker,  Brian Graham (1984)
The cases of 6 patients with endogenous Cushing's syndrome and opportunistic infections were studied, and compared with those of 17 similar patients reported in the literature. Cushing's syndrome was caused by ectopic adrenocorticotrophic hormone production or adrenal tumors in most patients, and hypercortisolism was extreme. Four infectious processes were preponderant: Cryptococcosis, aspergillosis, nocardiosis, or Pneumocystis carinii pneumonia occurred in 21 patients. Signs and symptoms of infection were often masked by the hypercortisolism. Morning plasma cortisol levels correlated with the infection type (rank-order Spearman correlation coefficient = 0.78, p less than 0.01): Levels of less than 70 micrograms/dL or greater than 121 micrograms/dL were associated with cryptococcosis or pneumocystis, respectively, by discriminant analysis. Of the 9 patients who survived their infection, 8 had evidence that cortisol production was reduced to near normal. In contrast, all 14 patients died in whom cortisol production went uncontrolled. In patients with hypercortisolism from endogenous Cushing's syndrome (especially of nonpituitary origin), opportunistic infections should be anticipated and prompt control of cortisol overproduction should be initiated.