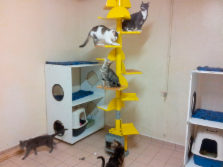 A study design was created to assess the potential for fleas to infest cats directly from other cats. In the first experiment, six cats were infested with 100 fleas each and then immediately put in contact with six flea-free cats for 24 h. After removal of all fleas the study was repeated and the contact between cats lasted 48 h. The total numbers of fleas recovered out of the 600 fleas deposited on the 6 donor cats after each infestation were 499 and 486 at 24 h and 48 h respectively. At 1 h post-contact, five fleas were found on the receiver cats, with three cats having one flea and one cat, two fleas. The number of fleas recovered on receiver cats increased towards the end of the study. At 24 h, 20% of the fleas were found on the receiver cats, and at 48 h, 23%. In a second experiment, the six flea-free cats were put in contact with the six donor cats which were each infested by 100 fleas 48 h before. Fewer fleas were found on the receiver cats ( n = 15), representing 3.8% of all fleas recovered ( n = 403). All the observed fleas had fed. The fleas collected on receiving cats comprised 10 males and 5 females, and 4 of the 5 females were engorged and contained eggs. The fleas collected on donor cats comprised 153 males and 235 females, they were all fed and all females contained eggs. This experiment demonstrated that gravid female fleas have a tendency to become permanently but not exclusively parasitic. Nevertheless, a few can change their cat host in as little as 1 h, which may play a role in the rapid introduction of a new flea population into a cat environment.

Frédéric Beugnet,  Jean-Lou Marie (2009)
Vector-borne diseases are caused by parasites, bacteria or viruses transmitted by the bite of hematophagous arthropods (mainly ticks and mosquitoes). The past few years have seen the emergence of new diseases, or re-emergence of existing ones, usually with changes in their epidemiology (i.e. geographical distribution, prevalence, and pathogenicity). The frequency of some vector-borne diseases of pets is increasing in Europe, i.e. canine babesiosis, granulocytic anaplasmosis, canine monocytic ehrlichiosis, thrombocytic anaplasmosis, and leishmaniosis. Except for the last, these diseases are transmitted by ticks. Both the distribution and abundance of the three main tick species, Rhipicephalus sanguineus, Dermacentor reticulatus and Ixodes ricinus are changing. The conditions for such changes involve primarily human factors, such as travel with pets, changes in human habitats, social and leisure activities, but climate changes also have a direct impact on arthropod vectors (abundance, geographical distribution, and vectorial capacity). Besides the most known diseases, attention should be kept on tick-borne encephalitis, which seems to be increasing in western Europe, as well as flea-borne diseases like the flea-transmitted rickettsiosis. Here, after consideration of the main reasons for changes in tick vector ecology, an overview of each "emerging" vector-borne diseases of pets is presented.

Insecticide and acaricide molecules and/or combinations to prevent pet infestation by ectoparasites.

Frédéric Beugnet,  Michel Franc (2012)
External antiparasitic drugs used in cats and dogs have evolved in terms of active ingredients but also regarding formulations. Old chemical groups have been supplanted by phenylpyrazoles, neonicotinoids, oxadiazines, spinosyns or others which are entering the veterinary market. In addition to insecticides-acaricides, insect and mite growth inhibitors (IGRs) have emerged. These IGRs are used in animals or in the environment, either alone or in combination with insecticides-acaricides. The notion of antiparasitic treatment has evolved to the concept of prevention of ectoparasite infestation but also of transmitted diseases through the introduction of formulations providing long-lasting activity. At the same time, ease-of-use has been improved with the development of spot-on formulations. Progress has also been achieved through the development of antiparasitic drugs providing control of both external and internal parasites. Copyright © 2012 Elsevier Ltd. All rights reserved.

Clare Patterson,  N F Hinkle,  Ann P. Koehler (1998)
Grooming efficiency was studied by infesting domestic short-hair cats, Felis catus L., with known numbers of cat fleas, Ctenocephalides felis felis Bouché, then collecting the cat feces and extracting the fleas to determine how many had been groomed off, varying the infestation level. Some hosts were found to be significantly more efficient at grooming fleas than others, with the best groomer removing 17.6% of its flea burden daily, compared with only 4.1% removed by the poorest groomer. Cats were more efficient at grooming fleas at infestations of 150 fleas. Mean on-host flea longevity was 7.8 d.