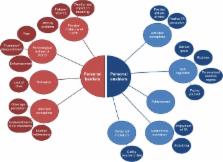 Given that physical activity (PA) has a positive impact on COPD symptoms and prognosis, this study examined the factors that both encourage and limit participation in PA for individuals with COPD in a primary care setting from the perspective of social cognitive theory.

A purposive sample of 26 individuals with a range of COPD severity (age range: 50–89 years; males =15) were recruited from primary care to participate in one of four focus groups. Thematic analysis was undertaken to identify key concepts related to their self-efficacy beliefs.

When designing interventions for individuals with COPD, it is important to understand the patient-specific social cognitive influences on PA participation. This information can then inform individually tailored management planning.

Social Foundation for thought and action: a social cognitive theory

Gail N Owen,  M Booth,  Michelle E. Leslie … (2000)
Regular physical activity in older adults can facilitate healthy aging, improve functional capacity, and prevent disease. However, factors associated with physical inactivity in older populations are poorly understood. This study attempts to identify social-cognitive and perceived environmental influences associated with physical activity participation in older populations. In a randomly selected sample of 449 Australian adults age 60 and older, we assessed self-reported physical activity and a range of social-cognitive and perceived environmental factors. Respondents were classified as sufficiently active and inactive based on energy expenditure estimates (kcal/week) derived from self-reported physical activity. Two logistic regression models, with and without self-efficacy included, were conducted to identify modifiable independent predictors of physical activity. Significantly more males than females were physically active. Physical activity participation was related to age with a greater proportion of those age 65-69 being active than those age 60-64 or 70 or older. High self-efficacy, regular participation of friends and family, finding footpaths safe for walking, and access to local facilities were significantly associated with being active. Identifying predictors of physical activity in older populations, particularly social support, facility access, and neighbourhood safety, can inform the development of policy and intervention strategies to promote the health of older people. Copyright 2000 American Health Foundation and Academic Press.

The full terms of the License are available at http://creativecommons.org/licenses/by/4.0/. The license permits unrestricted use, distribution, and reproduction in any medium, provided the original author and source are credited.