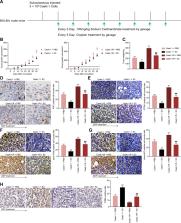 Sodium cantharidinate (SC) has been broadly applied in lung cancer treatment in China, while its specific function in cervical cancer (CC), a great contributor to death of female reproductive system cancers, remains unclear. Our research evaluated the anti-tumor effects of SC in CC and the mechanism involved.

First, cisplatin (DDP)-resistant Caski-1 and ME180 cell lines were developed and treated with SC. The effects of SC on CC cell growth were then evaluated. Subsequently, the genes targeted by SC were predicted via the bioinformatics website. The correlations between PTPN1 expression and tumor stage, lymph node metastasis and tumor differentiation were examined. We further conducted rescue experiments by overexpressing PTPN1 in CC cells, followed by SC and cisplatin treatments. The activation of the PI3K/AKT pathway in CC cells, and the effect of SC on the growth and drug resistance of Caski-1 cells in vivo were investigated.

The sensitivity of Caski-1 and ME180 cells to DDP was increased after SC treatment, which also enhanced the inhibitory effect of DDP on the cell growth. By prediction, we found that SC could target PTPN1. Patients with high expression of PTPN1 had higher clinical stage, lymph node metastasis and lower tumor differentiation. SC inhibited PTPN1 expression. Overexpression of PTPN1 attenuated the effect of SC. Furthermore, PTPN1 activated the PI3K/AKT pathway. Moreover, SC treatment inhibited the growth and drug resistance of Caski-1 cells in vivo.

Shaloam R Dasari,  Paul Bernard Tchounwou (2014)
Cisplatin, cisplatinum, or cis-diamminedichloroplatinum (II), is a well-known chemotherapeutic drug. It has been used for treatment of numerous human cancers including bladder, head and neck, lung, ovarian, and testicular cancers. It is effective against various types of cancers, including carcinomas, germ cell tumors, lymphomas, and sarcomas. Its mode of action has been linked to its ability to crosslink with the purine bases on the DNA; interfering with DNA repair mechanisms, causing DNA damage, and subsequently inducing apoptosis in cancer cells. However, because of drug resistance and numerous undesirable side effects such as severe kidney problems, allergic reactions, decrease immunity to infections, gastrointestinal disorders, hemorrhage, and hearing loss especially in younger patients, other platinum-containing anti-cancer drugs such as carboplatin, oxaliplatin and others, have also been used. Furthermore, combination therapies of cisplatin with other drugs have been highly considered to overcome drug-resistance and reduce toxicity. This comprehensive review highlights the physicochemical properties of cisplatin and related platinum-based drugs, and discusses its uses (either alone or in combination with other drugs) for the treatment of various human cancers. A special attention is paid to its molecular mechanisms of action, and its undesirable side effects. Copyright © 2014 Elsevier B.V. All rights reserved.

Ding Shen,  D. Hall,  Lynn Pouliot … (2012)
Cisplatin is one of the most effective broad-spectrum anticancer drugs. Its effectiveness seems to be due to the unique properties of cisplatin, which enters cells via multiple pathways and forms multiple different DNA-platinum adducts while initiating a cellular self-defense system by activating or silencing a variety of different genes, resulting in dramatic epigenetic and/or genetic alternations. As a result, the development of cisplatin resistance in human cancer cells in vivo and in vitro by necessity stems from bewilderingly complex genetic and epigenetic changes in gene expression and alterations in protein localization. Extensive published evidence has demonstrated that pleiotropic alterations are frequently detected during development of resistance to this toxic metal compound. Changes occur in almost every mechanism supporting cell survival, including cell growth-promoting pathways, apoptosis, developmental pathways, DNA damage repair, and endocytosis. In general, dozens of genes are affected in cisplatin-resistant cells, including pathways involved in copper metabolism as well as transcription pathways that alter the cytoskeleton, change cell surface presentation of proteins, and regulate epithelial-to-mesenchymal transition. Decreased accumulation is one of the most common features resulting in cisplatin resistance. This seems to be a consequence of numerous epigenetic and genetic changes leading to the loss of cell-surface binding sites and/or transporters for cisplatin, and decreased fluid phase endocytosis.