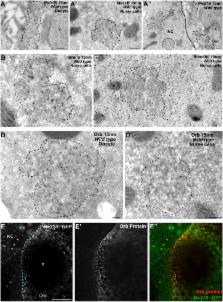 In Drosophila oocytes, gurken/TGF-α mRNA is essential for establishing the future embryonic axes. gurken remains translationally silent during transport from its point of synthesis in nurse cells to its final destination in the oocyte, where it associates with the edge of processing bodies. Here we show that, in nurse cells, gurken is kept translationally silent by the lack of sufficient Orb/CPEB, its translational activator. Processing bodies in nurse cells have a similar protein complement and ultrastructure to those in the oocyte, but they markedly less Orb and do not associate with gurken mRNA. Ectopic expression of Orb in nurse cells at levels similar to the wild-type oocyte dorso-anterior corner at mid-oogenesis is sufficient to cause gurken mRNA to associate with processing bodies and translate prematurely. We propose that controlling the spatial distribution of translational activators is a fundamental mechanism for regulating localized translation. 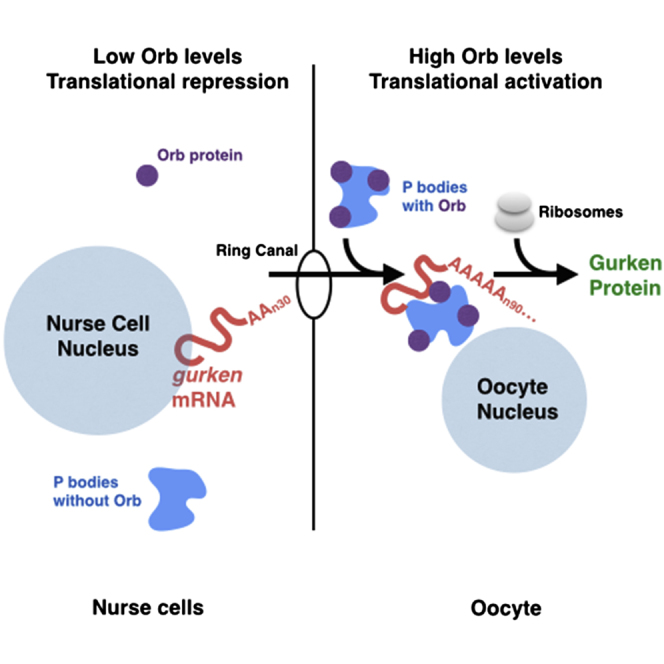 Localized transcripts that determine polarity are thought to be silenced during their transport by binding to translational repressors. Davidson et al. show that gurken mRNA, which sets up the primary Drosophila body axes, is instead regulated through lack of a translational activator, Orb, during its transport.

Nahum Sonenberg,  Brian Richter (2005)
Eukaryotic messenger RNAs contain a modified guanosine, termed a cap, at their 5' ends. Translation of mRNAs requires the binding of an initiation factor, eIF4E, to the cap structure. Here, we describe a family of proteins that through a shared sequence regulate cap-dependent translation. The biological importance of this translational regulation is immense, and affects such processes as cell growth, development, oncogenic transformation and perhaps even axon pathfinding and memory consolidation.

Oskar organizes the germ plasm and directs localization of the posterior determinant nanos.

L. Dickinson,  R. Lehmann,  A Ephrussi (1991)
Oskar is one of seven Drosophila maternal-effect genes that are necessary for germline and abdomen formation. We have cloned oskar and show that oskar RNA is localized to the posterior pole of the oocyte when germ plasm forms. This polar distribution of oskar RNA is established during oogenesis in three phases: accumulation in the oocyte, transport toward the posterior, and finally maintenance at the posterior pole of the oocyte. The colocalization of oskar and nanos in wild-type and bicaudal embryos suggests that oskar directs localization of the posterior determinant nanos. We propose that the pole plasm is assembled stepwise and that continued interaction among its components is required for germ cell determination.

Translational regulation of oskar mRNA by bruno, an ovarian RNA-binding protein, is essential.

K Kerr,  John Kim,  P Macdonald … (1995)
Oskar (osk) protein directs the deployment of nanos (nos), the posterior body-patterning morphogen in Drosophila. To avoid inappropriate activation of nos, osk activity must appear only at the posterior pole of the oocyte, where the osk mRNA becomes localized during oogenesis. Here, we show that translation of osk mRNA is, and must be, repressed prior to its localization; absence of repression allows osk protein to accumulate throughout the oocyte, specifying posterior body patterning throughout the embryo. Translational repression is mediated by an ovarian protein, bruno, that binds specifically to bruno response elements (BREs), present in multiple copies in the osk mRNA 3'UTR. Addition of BREs to a heterologous mRNA renders it sensitive to translational repression in the ovary.