Prevention of Encrustation on Ureteral Stents: Which Surface Parameters Provide Guidance for the Development of Novel Stent Materials? 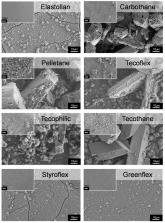 Encrustations of ureteral stents are one of the biggest problems with urological implants. Crystalline biofilms can occur alone or in combination with bacterial biofilms. To identify which surface parameters provide guidance for the development of novel stent materials, we used an in vitro encrustation system. Synthetic urine with increasing pH to simulate an infection situation was pumped over the polymer samples with adjusted flow rates at 37 °C to mimic the native body urine flow. Chemical surface features (contact angle, surface charge), as well as encrustations were characterized. The encrustations on the materials were analyzed quantitatively (dry mass) and qualitatively using scanning electron microscopy (SEM), energy dispersive X-ray spectroscopy (EDX), and Fourier transform infrared spectroscopy (FTIR). The aim of this comparative study was to identify crucial surface parameters that might predict the quantity and type of mineral deposits in vitro and provide guidance for the development and screening of new polymer-based biomaterials for ureteral stent design. For the first time, we could identify that, within the range of our polymers, those materials with a slight hydrophilicity and a strong negative zeta potential (around −60 mV) were most favorable for use as ureteral stent materials, as the deposition of crystalline biofilms was minimized.

Andrew P Evan (2009)
All stones share similar presenting symptoms, and urine supersaturation with respect to the mineral phase of the stone is essential for stone formation. However, recent studies using papillary biopsies of stone formers have provided a view of the histology of renal crystal deposition which suggests that the early sequence of events leading to stone formation differs greatly, depending on the type of stone and on the urine chemistry leading to supersaturation. Three general pathways for kidney stone formation are seen: (1) stones fixed to the surface of a renal papilla at sites of interstitial apatite plaque (termed Randall’s plaque), as seen in idiopathic calcium oxalate stone formers; (2) stones attached to plugs protruding from the openings of ducts of Bellini, as seen in hyperoxaluria and distal tubular acidosis; and (3) stones forming in free solution in the renal collection system, as in cystinuria. The presence of hydroxyapatite crystals in either the interstitial or tubule compartment (and sometimes both) of the renal medulla in stone formers is the rule and has implications for the initial steps of stone formation and the potential for renal injury.

Urease. The primary cause of infection-induced urinary stones.

C Itin,  Jack Griffith,  Daniel M. Musher (1976)
Previous reports have suggested that urease-producing bacteria play a prominent role in the formation of infection-induced urinary stones. We have carried out crystalization experiments in vitro which show that bacterial urease alkalinizes urine, thereby causing: (i) supersaturation with respect to struvite and calcium phosphate; and (ii) formation of struvite and apatite crystals. Growth of Proteus in urea-free urine or in urine which contained a urease inhibitor did not cause alkalinization, supersaturation, or crystallization of struvite and apatite. Growth of Klebsiella, Escherichia coli, or Pseudomonas was not associated with significant alkalinization, supersaturation, or crystallization. Struvite and apatite crystals dissolved in Proteus-infected urine in which undersaturation was maintained by urease inhibition. Similar results in all experiments were obtained using human urine and a synthetic urine which was devoid of matrix, pyrophosphate, or other undefined solutes. Urease-induced supersaturation appears to be the primary cause of infection-induced urinary stones.

Urolithiasis through the ages: data on more than 200,000 urinary stone analyses.

Thomas Knoll,  Anne B Schubert,  Dirk Fahlenkamp … (2011)
The incidence and prevalence of urolithiasis are increasing but clinicians also have the impression that gender and age distributions of stone formers are changing. Moreover, regional differences in stone occurrence and composition have been observed. We analyzed such trends based on a large series of urinary stone analyses. A total of 224,085 urinary stone analyses from 22 German centers were evaluated to determine the incidence of stone composition and identify age and gender distributions from 1977 to 2006. A subset of 58,682 stone analyses from 1993 to 2006 was available to identify regional differences in stone composition in Germany. Calcium containing calculi were most common in each gender. The overall male-to-female ratio of 2.4:1 increased from 1977 (1.86:1) to 2006 (2.7:1). The predominance of male calcium stone formers was even higher among elderly patients with a 3.13:1 ratio at ages 60 to 69. Since 1997, we observed a tendency toward an increasing incidence in middle-aged patients at ages 40 to 49 years. While the rate of infection stones constantly decreased, the incidence of uric acid calculi remained stable with an overall rate of 11.7% in males and 7.0% in females with a peak at higher ages. Cystine stones remained rare at 0.4% in males and 0.7% in females. In terms of regional analyses we noted great variation in stone composition in the 2 genders. Uric acid stones were more common in the eastern and southern regions but infection stones were mostly seen in eastern regions. In what is to our knowledge the largest series of stone analysis reported to date we identified an age and gender relationship of stone formation and composition. Regional variations are common and underline the influence of living habits, diet and standard of medical care on urinary stone formation. Copyright © 2011 American Urological Association Education and Research, Inc. Published by Elsevier Inc. All rights reserved.