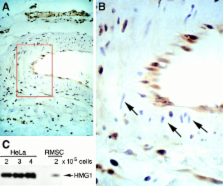 Author(s): Bernard Degryse a , Tiziana Bonaldi b , Paola Scaffidi b , Susanne Müller b , Massimo Resnati b , Francesca Sanvito b , Gianluigi Arrigoni b , Marco E. Bianchi b

HMG1 (high mobility group 1) is a ubiquitous and abundant chromatin component. However, HMG1 can be secreted by activated macrophages and monocytes, and can act as a mediator of inflammation and endotoxic lethality. Here we document a role of extracellular HMG1 in cell migration. HMG1 (and its individual DNA-binding domains) stimulated migration of rat smooth muscle cells in chemotaxis, chemokinesis, and wound healing assays. HMG1 induced rapid and transient changes of cell shape, and actin cytoskeleton reorganization leading to an elongated polarized morphology typical of motile cells. These effects were inhibited by antibodies directed against the receptor of advanced glycation endproducts, indicating that the receptor of advanced glycation endproducts is the receptor mediating the HMG1-dependent migratory responses. Pertussis toxin and the mitogen-activated protein kinase kinase inhibitor PD98059 also blocked HMG1-induced rat smooth muscle cell migration, suggesting that a G i/o protein and mitogen-activated protein kinases are required for the HMG1 signaling pathway. We also show that HMG1 can be released by damage or necrosis of a variety of cell types, including endothelial cells. Thus, HMG1 has all the hallmarks of a molecule that can promote atherosclerosis and restenosis after vascular damage.

F.William Studier,  Barbara A Moffatt (1986)
A gene expression system based on bacteriophage T7 RNA polymerase has been developed. T7 RNA polymerase is highly selective for its own promoters, which do not occur naturally in Escherichia coli. A relatively small amount of T7 RNA polymerase provided from a cloned copy of T7 gene 1 is sufficient to direct high-level transcription from a T7 promoter in a multicopy plasmid. Such transcription can proceed several times around the plasmid without terminating, and can be so active that transcription by E. coli RNA polymerase is greatly decreased. When a cleavage site for RNase III is introduced, discrete RNAs of plasmid length can accumulate. The natural transcription terminator from T7 DNA also works effectively in the plasmid. Both the rate of synthesis and the accumulation of RNA directed by T7 RNA polymerase can reach levels comparable with those for ribosomal RNAs in a normal cell. These high levels of accumulation suggest that the RNAs are relatively stable, perhaps in part because their great length and/or stem-and-loop structures at their 3' ends help to protect them against exonucleolytic degradation. It seems likely that a specific mRNA produced by T7 RNA polymerase can rapidly saturate the translational machinery of E. coli, so that the rate of protein synthesis from such an mRNA will depend primarily on the efficiency of its translation. When the mRNA is efficiently translated, a target protein can accumulate to greater than 50% of the total cell protein in three hours or less. We have used two ways to deliver active T7 RNA polymerase to the cell; infection by a lambda derivative that carries gene 1, or induction of a chromosomal copy of gene 1 under control of the lacUV5 promoter. When gene 1 is delivered by infection, very toxic target genes can be maintained silent in the cell until T7 RNA polymerase is introduced, when they rapidly become expressed at high levels. When gene 1 is resident in the chromosome, even the very low basal levels of T7 RNA polymerase present in the uninduced cell can prevent the establishment of plasmids carrying toxic target genes, or make the plasmid unstable.(ABSTRACT TRUNCATED AT 400 WORDS)

HMG-1 as a late mediator of endotoxin lethality in mice.

William Frazier,  O Bloom,  K Tracey … (1999)
Endotoxin, a constituent of Gram-negative bacteria, stimulates macrophages to release large quantities of tumor necrosis factor (TNF) and interleukin-1 (IL-1), which can precipitate tissue injury and lethal shock (endotoxemia). Antagonists of TNF and IL-1 have shown limited efficacy in clinical trials, possibly because these cytokines are early mediators in pathogenesis. Here a potential late mediator of lethality is identified and characterized in a mouse model. High mobility group-1 (HMG-1) protein was found to be released by cultured macrophages more than 8 hours after stimulation with endotoxin, TNF, or IL-1. Mice showed increased serum levels of HMG-1 from 8 to 32 hours after endotoxin exposure. Delayed administration of antibodies to HMG-1 attenuated endotoxin lethality in mice, and administration of HMG-1 itself was lethal. Septic patients who succumbed to infection had increased serum HMG-1 levels, suggesting that this protein warrants investigation as a therapeutic target.

Tricine-sodium dodecyl sulfate-polyacrylamide gel electrophoresis for the separation of proteins in the range from 1 to 100 kDa.

Susanna G Von Essen,  H Schägger (1987)
A discontinuous sodium dodecyl sulfate-polyacrylamide gel electrophoresis (SDS-PAGE) system for the separation of proteins in the range from 1 to 100 kDa is described. Tricine, used as the trailing ion, allows a resolution of small proteins at lower acrylamide concentrations than in glycine-SDS-PAGE systems. A superior resolution of proteins, especially in the range between 5 and 20 kDa, is achieved without the necessity to use urea. Proteins above 30 kDa are already destacked within the sample gel. Thus a smooth passage of these proteins from sample to separating gel is warranted and overloading effects are reduced. This is of special importance when large amounts of protein are to be loaded onto preparative gels. The omission of glycine and urea prevents disturbances which might occur in the course of subsequent amino acid sequencing.