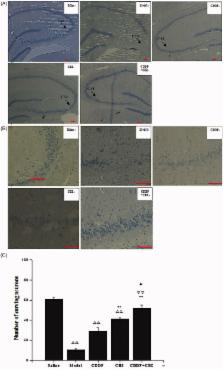 Objective: This study evaluated the protective effects of CDDP alone and in combination with carbamazepine (CBZ) on kainic acid-induced TLE and cognitive impairment in rats.

Conclusion: These findings support the use of CDDP as an adjuvant drug for the treatment of TLE and cognitive deficit. Its mechanism might be related to an anti-apoptosis effect and up-regulation of GDNF.

Silke Sperling,  Giuseppe Erba,  Itzhak Fried … (2012)
Despite reported success, surgery for pharmacoresistant seizures is often seen as a last resort. Patients are typically referred for surgery after 20 years of seizures, often too late to avoid significant disability and premature death. We sought to determine whether surgery soon after failure of 2 antiepileptic drug (AED) trials is superior to continued medical management in controlling seizures and improving quality of life (QOL). The Early Randomized Surgical Epilepsy Trial (ERSET) is a multicenter, controlled, parallel-group clinical trial performed at 16 US epilepsy surgery centers. The 38 participants (18 men and 20 women; aged ≥12 years) had mesial temporal lobe epilepsy (MTLE) and disabling seizues for no more than 2 consecutive years following adequate trials of 2 brand-name AEDs. Eligibility for anteromesial temporal resection (AMTR) was based on a standardized presurgical evaluation protocol. Participants were randomized to continued AED treatment or AMTR 2003-2007, and observed for 2 years. Planned enrollment was 200, but the trial was halted prematurely due to slow accrual. Receipt of continued AED treatment (n = 23) or a standardized AMTR plus AED treatment (n = 15). In the medical group, 7 participants underwent AMTR prior to the end of follow-up and 1 participant in the surgical group never received surgery. The primary outcome variable was freedom from disabling seizures during year 2 of follow-up. Secondary outcome variables were health-related QOL (measured primarily by the 2-year change in the Quality of Life in Epilepsy 89 [QOLIE-89] overall T-score), cognitive function, and social adaptation. Zero of 23 participants in the medical group and 11 of 15 in the surgical group were seizure free during year 2 of follow-up (odds ratio = ∞; 95% CI, 11.8 to ∞; P < .001). In an intention-to-treat analysis, the mean improvement in QOLIE-89 overall T-score was higher in the surgical group than in the medical group but this difference was not statistically significant (12.6 vs 4.0 points; treatment effect = 8.5; 95% CI, -1.0 to 18.1; P = .08). When data obtained after surgery from participants in the medical group were excluded, the effect of surgery on QOL was significant (12.8 vs 2.8 points; treatment effect = 9.9; 95% CI, 2.2 to 17.7; P = .01). Memory decline (assessed using the Rey Auditory Verbal Learning Test) occurred in 4 participants (36%) after surgery, consistent with rates seen in the literature; but the sample was too small to permit definitive conclusions about treatment group differences in cognitive outcomes. Adverse events included a transient neurologic deficit attributed to a magnetic resonance imaging-identified postoperative stroke in a participant who had surgery and 3 cases of status epilepticus in the medical group. Among patients with newly intractable disabling MTLE, resective surgery plus AED treatment resulted in a lower probability of seizures during year 2 of follow-up than continued AED treatment alone. Given the premature termination of the trial, the results should be interpreted with appropriate caution. clinicaltrials.gov Identifier: NCT00040326.

The neurobiology of antiepileptic drugs.

Increased Bax/Bcl-2 ratio up-regulates caspase-3 and increases apoptosis in the thymus of patients with myasthenia gravis.

Stavroula Salakou,  Dimitrios Kardamakis,  Athanassios Tsamandas … (2015)
In this study the possible relation of Bax (an apoptosis promoter) to Bcl-2 (an apoptosis inhibitor) ratio with the apoptosis co-ordination enzyme, caspase-3, in the thymus of patients with myasthenia gravis (MG) was investigated in correlation with long-term clinical prognosis. The study included 46 patients (17M/29F, mean age 36.60 +/- 16.09 yr) with MG, who underwent thymectomy for treatment. The clinical staging (Osserman classification) included: stage 1-5, IIA-21, IIB-17, III-3. The pathology of the thymus showed: hyperplasia-26, atrophy-8, thymoma B1 and B2 type-9, thymoma B3 type (well differentiated thymic carcinoma)-3. The patients were evaluated 39-166 (mean 91.87 +/- 38.38) months after thymectomy. At the end of the follow-up period, the patients were classified as follows: group A: complete stable remission, group B: pharmacological remission + minimal manifestations + improvement + deterioration. Paraffin sections of thymic tissue were subjected to: a) immunohistochemistry (bax, bcl-2, caspase-3 protein); b) in situ hybridization (bax, bcl-2 mRNA); and c) TUNEL-stain (apoptotic cells). Bax to bcl-2 mRNA and protein ratio was determined for each sample by dividing the % bax (+) cells by the % bcl-2 (+) cells. Follow-up data were available for 39/46 patients: 13/39 patients belonged to group A and 26/39 to group B. The Bax/Bcl-2 mRNA and protein ratios were increased towards advanced disease stages (+370% for mRNA and +391% for protein, from MG stage I to stage III). These ratios were correlated with caspase-3 expression (r = 0.782 and 0.583, p 1 (1.47 +/- 0.07 for mRNA and 1.52 +/- 0.18 for protein). The Kaplan-Meier survival curve showed higher, free of disease, survival in group A (p = 0.0082). Cox regression analysis revealed that the Bax/Bcl-2 ratio was an independent prognostic factor, however the p-value was marginally significant (95% CI: 1.078-44.073, p = 0.041). This study has demonstrated that in patients with MG who underwent thymectomy: a) the Bax/Bcl-2 ratio may up-regulate caspase-3 expression and modulate apoptosis associated with progress of the disease; b) the Bax/Bcl-2 ratio < 1 was associated with complete stable remission after thymectomy; and c) Bax/Bcl-2 ratio was an independent predictive marker for therapeutic response after thymectomy.

*These authors are co-first authors, and have made an equal contribution to this work.

Supplemental data for this article can be accessed here .