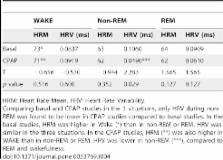 Obstructive Sleep Apnea (OSA) is a major risk factor for cardiovascular disease. The goal of this study was to demonstrate whether the use of CPAP produces significant changes in the heart rate or in the heart rate variability of patients with OSA in the first night of treatment and whether gender and obesity play a role in these differences.

Single-center transversal study including patients with severe OSA corrected with CPAP. Only patients with total correction after CPAP were included. Patients underwent two sleep studies on consecutive nights: the first night a basal study, and the second with CPAP. We also analyzed the heart rate changes and their relationship with CPAP treatment, sleep stages, sex and body mass index. Twenty-minute segments of the ECG were selected from the sleep periods of REM, no-REM and awake. Heart rate (HR) and heart rate variability (HRV) were studied by comparing the R-R interval in the different conditions. We also compared samples from the basal study and CPAP nights.

These findings support that cardiac variability improves as an acute effect, independently of gender or weight, in the first night of CPAP use in severe OSA patients, supporting the idea of continuous use and emphasizing that noncompliance of CPAP treatment should be avoided even if it is just once.

Jonathan W. C. Lim,  N Kannathal,  Vinod K. Paul … (2006)
Heart rate variability (HRV) is a reliable reflection of the many physiological factors modulating the normal rhythm of the heart. In fact, they provide a powerful means of observing the interplay between the sympathetic and parasympathetic nervous systems. It shows that the structure generating the signal is not only simply linear, but also involves nonlinear contributions. Heart rate (HR) is a nonstationary signal; its variation may contain indicators of current disease, or warnings about impending cardiac diseases. The indicators may be present at all times or may occur at random-during certain intervals of the day. It is strenuous and time consuming to study and pinpoint abnormalities in voluminous data collected over several hours. Hence, HR variation analysis (instantaneous HR against time axis) has become a popular noninvasive tool for assessing the activities of the autonomic nervous system. Computer based analytical tools for in-depth study of data over daylong intervals can be very useful in diagnostics. Therefore, the HRV signal parameters, extracted and analyzed using computers, are highly useful in diagnostics. In this paper, we have discussed the various applications of HRV and different linear, frequency domain, wavelet domain, nonlinear techniques used for the analysis of the HRV.

Risk factors for central and obstructive sleep apnea in 450 men and women with congestive heart failure.

Publisher ID: PONE-D-11-22141
DOI: 10.1371/journal.pone.0033769
PMC ID: 3306298
PubMed ID: 22438995
Copyright statement: Kufoy et al. This is an open-access article distributed under the terms of the Creative Commons Attribution License, which permits unrestricted use, distribution, and reproduction in any medium, provided the original author and source are credited.