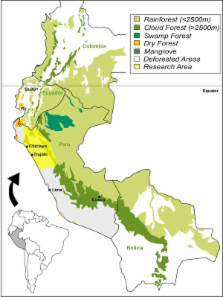 This paper examines the traditional use of medicinal plants in Northern Peru, with special focus on the Departments of Piura, Lambayeque, La Libertad, Cajamarca, and San Martin.

Northern Peru represents the center of the old Central Andean "Health Axis," stretching from Ecuador to Bolivia. The roots of traditional healing practices in this region go at least as far back as the Moche period (AC 100–800).

Although about 50% of the plants in use reported in the colonial period have disappeared from the popular pharmacopoeia, the plant knowledge of the population is much more extensive than in other parts of the Andean region.

510 plant species used for medicinal purposes were collected, identified and their vernacular names, traditional uses and applications recorded. The families best represented were Asteraceae with 69 species, Fabaceae (35), Lamiaceae (25), and Solanaceae (21). Euphorbiaceae had twelve species, and Apiaceae and Poaceae 11 species.

The highest number of species was used for the treatment of "magical/ritual" ailments (207 species), followed by respiratory disorders (95), problems of the urinary tract (85), infections of female organs (66), liver ailments (61), inflammations (59), stomach problems (51) and rheumatism (45).

Most of the plants used (83%) were native to Peru. Fresh plants, often collected wild, were used in two thirds of all cases, and the most common applications included the ingestion of herb decoctions or the application of plant material as poultices.

Trends in alternative medicine use in the United States, 1990-1997: results of a follow-up national survey.

N R Farnsworth,  Z Guo,  S Bingel … (1984)
One of the prerequisites for the success of primary health care is the availability and use of suitable drugs. Plants have always been a common source of medicaments, either in the form of traditional preparations or as pure active principles. It is thus reasonable for decision-makers to identify locally available plants or plant extracts that could usefully be added to the national list of drugs, or that could even replace some pharmaceutical preparations that need to be purchased and imported. This update article presents a list of plant-derived drugs, with the names of the plant sources, and their actions or uses in therapy.

Stephen A. Ward,  Michael B. Fisher (1994)
Complementary or unconventional treatments are used by many doctors and other therapists throughout Europe. The major forms are acupuncture, homoeopathy, manual therapy or manipulation, and phytotherapy or herbal medicine. The relative popularity of therapies differs between countries, but public demand is strong and growing. Regulation of practitioners varies widely: in most countries only registered health professionals may practice, but in the United Kingdom practice is virtually unregulated. Germany and some Scandinavian countries have intermediate systems. Legal reforms are in progress in the Netherlands and the United Kingdom. European institutions are starting to influence the development of complementary medicine. Harmonisation of training and regulation of practitioners is the challenge for the future.