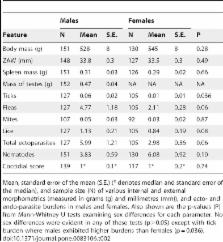 Invasive species have been cited as major causes of population extinctions in several animal and plant classes worldwide. The North American grey squirrel ( Sciurus carolinensis) has a major detrimental effect on native red squirrel ( Sciurus vulgaris) populations across Britain and Ireland, in part because it can be a reservoir host for the deadly squirrelpox virus (SQPV). Whilst various researchers have investigated the epizootiology of SQPV disease in grey squirrels and have modelled the consequent effects on red squirrel populations, less work has examined morphological and physiological characteristics that might make individual grey squirrels more susceptible to contracting SQPV. The current study investigated the putative relationships between morphology, parasitism, and SQPV exposure in grey squirrels. We found geographical, sex, and morphological differences in SQPV seroprevalence. In particular, larger animals, those with wide zygomatic arch widths (ZAW), males with large testes, and individuals with concurrent nematode and/or coccidial infections had an increased seroprevalence of SQPV. In addition, males with larger spleens, particularly those with narrow ZAW, were more likely to be exposed to SQPV. Overall these results show that there is variation in SQPV seroprevalence in grey squirrels and that, consequently, certain individual, or populations of, grey squirrels might be more responsible for transmitting SQPV to native red squirrel populations.

Biological and biomedical implications of the co-evolution of pathogens and their hosts.

Brian Charlesworth,  David B. Levin,  Scott Webster … (2002)
Co-evolution between host and pathogen is, in principle, a powerful determinant of the biology and genetics of infection and disease. Yet co-evolution has proven difficult to demonstrate rigorously in practice, and co-evolutionary thinking is only just beginning to inform medical or veterinary research in any meaningful way, even though it can have a major influence on how genetic variation in biomedically important traits is interpreted. Improving our understanding of the biomedical significance of co-evolution will require changing the way in which we look for it, complementing the phenomenological approach traditionally favored by evolutionary biologists with the exploitation of the extensive data becoming available on the molecular biology and molecular genetics of host-pathogen interactions.

Heritable true fitness and bright birds: a role for parasites?

Peter W Hamilton,  Samantha Zuk (1982)
Combination of seven surveys of blood parasites in North American passerines reveals weak, highly significant association over species between incidence of chronic blood infections (five genera of protozoa and one nematode) and striking display (three characters: male "brightness," female "brightness," and male song). This result conforms to a model of sexual selection in which (i) coadaptational cycles of host and parasites generate consistently positive offspring-on-parent regression of fitness, and (ii) animals choose mates for genetic disease resistance by scrutiny of characters whose full expression is dependent on health and vigor.

Testosterone reduces macrophage expression in the mouse of toll-like receptor 4, a trigger for inflammation and innate immunity.

J Huet,  Ian Marriott,  A Rettew (2008)
Though gender-based differences in the development of protective or pathological adaptive host responses have been widely noted, it is becoming apparent that sex may also influence the early perception of microbial challenges and the generation of inflammatory immune responses. These differences may be due to the actions of reproductive hormones, and such a hypothesis is supported by the presence of receptors for these hormones in a variety of immune cell types. Androgens such as testosterone have been shown to decrease immune functions, including cytokine production. However, the mechanisms by which testosterone limits such responses remain undefined. In this study, we have investigated the acute effects of testosterone on the level of expression of a key trigger for inflammation and innate immunity, Toll-like receptor 4 (TLR4), on isolated mouse macrophages. We show that in vitro testosterone treatment of macrophages, generated in the absence of androgen, elicits a modest but significant decrease in TLR4 expression and sensitivity to a TLR4-specific ligand. In addition, we have studied the effect of in vivo removal of endogenous testosterone on TLR4 expression and endotoxin susceptibility. We report that orchidectomized mice were significantly more susceptible to endotoxic shock and show that macrophages isolated from these animals have significantly higher TLR4 cell surface expression than those derived from sham gonadectomized mice. Importantly, these effects were not apparent in orchidectomized animals that received exogenous testosterone treatment. As such, these data may represent an important mechanism underlying the immunosuppressive effects of testosterone.

The research was supported by Queen's University Belfast and by the Northern Ireland Forest Service, which provided the specimens. CJM and DD were funded by the Scottish Government. The funders had no role in study design, data collection and analysis, decision to publish, or preparation of the manuscript.