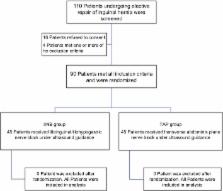 This was a prospective randomized clinical trial of 90 patients who received either IINB (N=45) or TAP block (N=45) using 0.2% bupivacaine 15 mL under ultrasound (US) guidance based on a random assignment in the postanesthesia care unit after having an open repair of inguinal hernia. Numeric Rating Scale (NRS) scores were recorded immediately following, 4, 8, 12, and 24 hours after completion of the block. NRS scores at rest and during movement were recorded 24, 36, and 48 hours after surgery. Analgesic satisfaction level was also evaluated by a Likert-based patient questionnaire.

NRS scores were lower in the IINB group compared to the TAP block group both at rest and during movement. The difference in dynamic pain scores was statistically significant ( P=0.017). In addition, analgesic satisfaction was significantly greater in the IINB group than the TAP block group (mean score 2.43 vs 1.84, P=0.001). Postoperative opioid requirements did not differ between the two groups.

T.M.N. Tran,  J.J. Ivanusic,  P Hebbard … (2009)
The transversus abdominis plane (TAP) block is a new regional anaesthesia technique that provides analgesia after abdominal surgery. It involves injection of local anaesthetic into the plane between the transversus abdominis and the internal oblique muscles. The TAP block can be performed using a landmark technique through the lumbar triangle or with ultrasound guidance. The goal of this anatomical study with dye injection into the TAP and subsequent cadaver dissections was to establish the likely spread of local anaesthesia in vivo and the segmental nerve involvement resulting from ultrasound-guided TAP block. An ultrasound-guided injection of aniline dye into the TAP was performed for each hemi-abdominal wall of 10 unembalmed human cadavers and this was followed by dissection to determine the extent of dye spread and nerve involvement in the dye injection. After excluding one pilot specimen and one with advanced tissue decomposition, 16 hemi-abdominal walls were successfully injected and dissected. The lower thoracic nerves (T10-T12) and first lumbar nerve (L1) were found emerging from posterior to anterior between the costal margin and the iliac crest. Segmental nerves T10, T11, T12, and L1 were involved in the dye in 50%, 100%, 100%, and 93% of cases, respectively. This anatomical study shows that an ultrasound-guided TAP injection cephalad to the iliac crest is likely to involve the T10-L1 nerve roots, and implies that the technique may be limited to use in lower abdominal surgery.

Improving postoperative pain management: what are the unresolved issues?