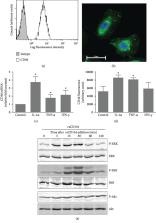 Inflammation is a major contributor to tubular epithelium injury in kidney disorders, and the involvement of blood platelets in driving inflammation is increasingly stressed. CD154, the ligand of CD40, is one of the mediators supporting platelet proinflammatory properties. Although hypoxia is an essential constituent of the inflammatory reaction, if and how platelets and CD154 regulate inflammation in hypoxic conditions remain unclear. Here, we studied the control by CD154 of the proinflammatory cytokine interleukin- (IL-) 6 secretion in short-term oxygen (O 2) deprivation conditions, using the HK-2 cell line as a kidney tubular epithelial cell (TEC) model. IL-6 secretion was markedly stimulated by CD154 after 1 to 3 hours of hypoxic stress. Both intracellular IL-6 expression and secretion were stimulated by CD154 and associated with a strong upregulation of IL-6 mRNA and increased transcription. Searching for inhibitors of CD154-mediated IL-6 production by HK-2 cells in hypoxic conditions, we observed that chloroquine, a drug that has been repurposed as an anti-inflammatory agent, alleviated this induction. Therefore, CD154 is a potent early stimulus for IL-6 secretion by TECs in O 2 deprivation conditions, a mechanism likely to take part in the deleterious inflammatory consequences of platelet activation in kidney tubular injury. The inhibition of CD154-induced IL-6 production by chloroquine suggests the potential usefulness of this drug as a therapeutic adjunct in conditions associated with acute kidney injury.

Neal Iwakoshi,  D Friend,  Michael J Grusby … (2001)
Considerable progress has been made in identifying the transcription factors involved in the early specification of the B-lymphocyte lineage. However, little is known about factors that control the transition of mature activated B cells to antibody-secreting plasma cells. Here we report that the transcription factor XBP-1 is required for the generation of plasma cells. XBP-1 transcripts were rapidly upregulated in vitro by stimuli that induce plasma-cell differentiation, and were found at high levels in plasma cells from rheumatoid synovium. When introduced into B-lineage cells, XBP-1 initiated plasma-cell differentiation. Mouse lymphoid chimaeras deficient in XBP-1 possessed normal numbers of activated B lymphocytes that proliferated, secreted cytokines and formed normal germinal centres. However, they secreted very little immunoglobulin of any isotype and failed to control infection with the B-cell-dependent polyoma virus, because plasma cells were markedly absent. XBP-1 is the only transcription factor known to be selectively and specifically required for the terminal differentiation of B lymphocytes to plasma cells.

Joseph Slupsky,  M. Gräfe,  I Anagnostopoulos … (1998)
CD40 ligand (CD40L, CD154), a transmembrane protein structurally related to the cytokine TNF-alpha, was originally identified on stimulated CD4+ T cells, and later on stimulated mast cells and basophils. Interaction of CD40L on T cells with CD40 on B cells is of paramount importance for the development and function of the humoral immune system. CD40 is not only constitutively present on B cells, but it is also found on monocytes, macrophages and endothelial cells, suggesting that CD40L has a broader function in vivo. We now report that platelets express CD40L within seconds of activation in vitro and in the process of thrombus formation in vivo. Like TNF-alpha and interleukin-1, CD40L on platelets induces endothelial cells to secrete chemokines and to express adhesion molecules, thereby generating signals for the recruitment and extravasation of leukocytes at the site of injury. Our results indicate that platelets are not only involved in haemostasis but that they also directly initiate an inflammatory response of the vessel wall.

David P Basile,  Jolene T Sutton,  Nicole Anderson (2012)
Acute kidney injury (AKI) is the leading cause of nephrology consultation and is associated with high mortality rates. The primary causes of AKI include ischemia, hypoxia, or nephrotoxicity. An underlying feature is a rapid decline in glomerular filtration rate (GFR) usually associated with decreases in renal blood flow. Inflammation represents an important additional component of AKI leading to the extension phase of injury, which may be associated with insensitivity to vasodilator therapy. It is suggested that targeting the extension phase represents an area potential of treatment with the greatest possible impact. The underlying basis of renal injury appears to be impaired energetics of the highly metabolically active nephron segments (i.e., proximal tubules and thick ascending limb) in the renal outer medulla, which can trigger conversion from transient hypoxia to intrinsic renal failure. Injury to kidney cells can be lethal or sublethal. Sublethal injury represents an important component in AKI, as it may profoundly influence GFR and renal blood flow. The nature of the recovery response is mediated by the degree to which sublethal cells can restore normal function and promote regeneration. The successful recovery from AKI depends on the degree to which these repair processes ensue and these may be compromised in elderly or chronic kidney disease (CKD) patients. Recent data suggest that AKI represents a potential link to CKD in surviving patients. Finally, earlier diagnosis of AKI represents an important area in treating patients with AKI that has spawned increased awareness of the potential that biomarkers of AKI may play in the future. © 2012 American Physiological Society. Compr Physiol 2:1303-1353, 2012.