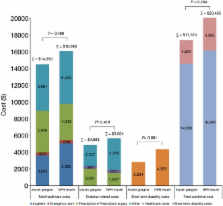 Adult employees with T2DM who were previously treated with oral antidiabetic drugs and/or glucagon-like-peptide 1 receptor agonists and initiated GLA or NPH were included if they were continuously enrolled in healthcare and short-term-disability coverages for 3 months before (baseline) and 1 year after (follow-up) initiation. Treatment selection bias was addressed by 2:1 propensity score matching. Sensitivity analyses were conducted using different matching ratios.

Outcomes during 1-year follow-up were measured and compared: insulin treatment persistence and adherence; hypoglycaemia rates and daily average consumption of insulin; total and diabetes-specific healthcare resource utilisation and costs and loss in productivity, as measured by short-term disability, and the associated costs.

Management of Hyperglycemia in Type 2 Diabetes: A Patient-Centered Approach

(2008)
The prevalence of diabetes continues to grow, with the number of people in the U.S. with diagnosed diabetes now reaching 17.5 million. The objectives of this study are to quantify the economic burden of diabetes caused by increased health resource use and lost productivity, and to provide a detailed breakdown of the costs attributed to diabetes. This study uses a prevalence-based approach that combines the demographics of the population in 2007 with diabetes prevalence rates and other epidemiological data, health care costs, and economic data into a Cost of Diabetes Model. Health resource use and associated medical costs are analyzed by age, sex, type of medical condition, and health resource category. Data sources include national surveys and claims databases, as well as a proprietary database that contains annual medical claims for 16.3 million people in 2006. The total estimated cost of diabetes in 2007 is $174 billion, including $116 billion in excess medical expenditures and $58 billion in reduced national productivity. Medical costs attributed to diabetes include $27 billion for care to directly treat diabetes, $58 billion to treat the portion of diabetes-related chronic complications that are attributed to diabetes, and $31 billon in excess general medical costs. The largest components of medical expenditures attributed to diabetes are hospital inpatient care (50% of total cost), diabetes medication and supplies (12%), retail prescriptions to treat complications of diabetes (11%), and physician office visits (9%). People with diagnosed diabetes incur average expenditures of $11,744 per year, of which $6,649 is attributed to diabetes. People with diagnosed diabetes, on average, have medical expenditures that are approximately 2.3 times higher than what expenditures would be in the absence of diabetes. For the cost categories analyzed, approximately $1 in $5 health care dollars in the U.S. is spent caring for someone with diagnosed diabetes, while approximately $1 in $10 health care dollars is attributed to diabetes. Indirect costs include increased absenteeism ($2.6 billion) and reduced productivity while at work ($20.0 billion) for the employed population, reduced productivity for those not in the labor force ($0.8 billion), unemployment from disease-related disability ($7.9 billion), and lost productive capacity due to early mortality ($26.9 billion). The actual national burden of diabetes is likely to exceed the $174 billion estimate because it omits the social cost of intangibles such as pain and suffering, care provided by nonpaid caregivers, excess medical costs associated with undiagnosed diabetes, and diabetes-attributed costs for health care expenditures categories omitted from this study. Omitted from this analysis are expenditure categories such as health care system administrative costs, over-the-counter medications, clinician training programs, and research and infrastructure development. The burden of diabetes is imposed on all sectors of society-higher insurance premiums paid by employees and employers, reduced earnings through productivity loss, and reduced overall quality of life for people with diabetes and their families and friends.

Impact of medication adherence on hospitalization risk and healthcare cost.

Irving R. Epstein,  Kimberly A McGuigan,  R R Verbrugge … (2005)
The objective of this study was to evaluate the impact of medication adherence on healthcare utilization and cost for 4 chronic conditions that are major drivers of drug spending: diabetes, hypertension, hypercholesterolemia, and congestive heart failure. The authors conducted a retrospective cohort observation of patients who were continuously enrolled in medical and prescription benefit plans from June 1997 through May 1999. Patients were identified for disease-specific analysis based on claims for outpatient, emergency room, or inpatient services during the first 12 months of the study. Using an integrated analysis of administrative claims data, medical and drug utilization were measured during the 12-month period after patient identification. Medication adherence was defined by days' supply of maintenance medications for each condition. The study consisted of a population-based sample of 137,277 patients under age 65. Disease-related and all-cause medical costs, drug costs, and hospitalization risk were measured. Using regression analysis, these measures were modeled at varying levels of medication adherence. For diabetes and hypercholesterolemia, a high level of medication adherence was associated with lower disease-related medical costs. For these conditions, higher medication costs were more than offset by medical cost reductions, producing a net reduction in overall healthcare costs. For diabetes, hypercholesterolemia, and hypertension, cost offsets were observed for all-cause medical costs at high levels of medication adherence. For all 4 conditions, hospitalization rates were significantly lower for patients with high medication adherence. For some chronic conditions, increased drug utilization can provide a net economic return when it is driven by improved adherence with guidelines-based therapy.

This is an open-access article distributed under the terms of the Creative Commons Attribution Non-commercial License, which permits use, distribution, and reproduction in any medium, provided the original work is properly cited, the use is non commercial and is otherwise in compliance with the license. See: http://creativecommons.org/licenses/by-nc/3.0/ and http://creativecommons.org/licenses/by-nc/3.0/legalcode