Canagliflozin-induced pancreatitis: a rare side effect of a new drug 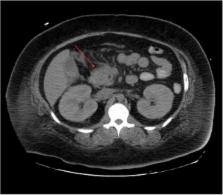 Acute pancreatitis is most commonly attributed to gallstones, alcohol abuse, and metabolic disorders such as hyperlipidemia and hypercalcemia. Medications are an infrequent yet commonly overlooked etiology of pancreatitis. Although several drugs have been implicated, antidiabetic agents are a rare cause for drug-induced pancreatitis. Canagliflozin is a new drug in the class of SGLT-2 inhibitors used for the treatment of type 2 diabetes mellitus. Serious reported side effects include renal impairment, hyperkalemia, and hypotension. Pancreatitis as a result of canagliflozin, however, is exceedingly rare. Here we describe a case of a 33-year old female who presented with severe acute pancreatitis in the setting of recent initiation of canagliflozin. Given the timing of her presentation and after excluding all other possible etiologies, it was determined that canagliflozin was the likely source of her illness. This case highlights the importance of identifying drug-induced pancreatitis, especially in novel drugs, as it is commonly neglected in patients with multiple medical comorbidities and those taking numerous medications. Prompt identification of drug-induced pancreatitis can improve management as well as decrease morbidity and mortality in these individuals.

E Chao,  R. William Henry (2010)
Inhibiting sodium-glucose co-transporters (SGLTs), which have a key role in the reabsorption of glucose in the kidney, has been proposed as a novel therapeutic strategy for diabetes. Genetic mutations in the kidney-specific SGLT2 isoform that result in benign renal glycosuria, as well as preclinical and clinical studies with SGLT2 inhibitors in type 2 diabetes, support the potential of this approach. These investigations indicate that elevating renal glucose excretion by suppressing SGLT2 can reduce plasma glucose levels, as well as decrease weight. Although data from ongoing Phase III trials of these agents are needed to more fully assess safety, results suggest that the beneficial effects of SGLT2 inhibition might be achieved without exerting significant side effects--an advantage over many current diabetes medications. This article discusses the role of SGLT2 in glucose homeostasis and the evidence available so far on the therapeutic potential of blocking these transporters in the treatment of diabetes.

Association of diabetic ketoacidosis and acute pancreatitis: observations in 100 consecutive episodes of DKA.

Pragya Yadav,  Arathy D. S. Nair,  C. S. Pitchumoni (2000)
The aim of this study was to evaluate the incidence, pathogenesis, and prognosis of acute pancreatitis (AP) in diabetic ketoacidosis (DKA). DKA is associated with nonspecific increase in serum amylase levels. Autopsy studies, on the other hand, had previously raised the issue of pancreatic necrosis in patients with DKA. However, the incidence, pathogenesis and prognosis of AP in the setting of DKA has not been prospectively evaluated. This is a prospective evaluation of 100 consecutive episodes of DKA during a period of 13 months starting in January 1998, in a university hospital in New York City. In addition to careful history, complete blood count, arterial blood gas estimation, and a comprehensive metabolic assay, serum amylase, lipase, and triglyceride levels were estimated on admission and 48 h later. All patients with abdominal pain or elevated serum levels of amylase or lipase (more than three times normal) or triglyceride levels >5.65 mmo/L (500 mg/dl) had a CT scan of the abdomen. The diagnosis of AP was confirmed when pancreatic enlargement or necrosis on contrast enhanced CT scan was seen. Eleven patients (11%) had AP. History of abdominal pain, not a feature on admission to include AP in the differential diagnosis, was elicited subsequently in eight patients. Abdominal pain was absent in two and one was comatose on admission. The etiology of AP was hypertriglyceridemia in four, alcohol in two, drug induced in one, and idiopathic in four patients. The hypertriglyceridemia was transient in four patients and resolved once the episode of DKA was corrected. Lipase elevation was noted in 29% and amylase elevation in 21% of all patients with DKA. Similar to increased amylase levels, serum lipase levels were also noted to be high in the absence of CT evidence of AP. DKA may mask coexisting AP, which occurs in at least 10-15% of cases. The pathogenesis of AP in DKA varies, but at least in some transient and profound hyperlipidemia is an identifiable factor. AP is more likely to be associated with a severe episode of DKA with marked acidosis and hyperglycemia. Ranson's prognostic criteria are not applicable to assess the severity of AP in DKA because they overestimate the severity. Severity index based on CT findings appears to better correlate with outcome. Elevation of serum lipase and amylase occur in DKA, and elevation of lipase levels appears to be less specific than amylase levels for the diagnosis of AP in the diagnosis of DKA. Although in this study AP in DKA appeared to be mild, a definite conclusion with regard to the severity should be based only on a much larger number of patients, as only 20% of patients with AP in general have serious disease.