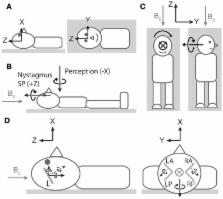 Dale C. Roberts,  Vincenzo Marcelli,  Joseph S. Gillen … (2011)
Vertigo in and around magnetic resonance imaging (MRI) machines has been noted for years [1, 2]. Several mechanisms have been suggested to explain these sensations [3, 4], yet without direct, objective measures, the cause is unknown. We found that all of our healthy human subjects developed a robust nystagmus while simply lying in the static magnetic field of an MRI machine. Patients lacking labyrinthine function did not. We use the pattern of eye movements as a measure of vestibular stimulation to show that the stimulation is static (continuous, proportional to static magnetic field strength, requiring neither head movement nor dynamic change in magnetic field strength) and directional (sensitive to magnetic field polarity and head orientation). Our calculations and geometric model suggest that magnetic vestibular stimulation (MVS) derives from a Lorentz force resulting from interaction between the magnetic field and naturally occurring ionic currents in the labyrinthine endolymph fluid. This force pushes on the semicircular canal cupula, leading to nystagmus. We emphasize that the unique, dual role of endolymph in the delivery of both ionic current and fluid pressure, coupled with the cupula's function as a pressure sensor, makes magnetic-field-induced nystagmus and vertigo possible. Such effects could confound functional MRI studies of brain behavior, including resting-state brain activity. Copyright © 2011 Elsevier Ltd. All rights reserved.

P. Gowland,  P Glover,  I Cavin … (2007)
Vertigo-like sensations or apparent perception of movement are reported by some subjects and operators in and around high field whole body magnetic resonance body scanners. Induced currents (which modulate the firing rate of the vestibular hair cell), magneto-hydrodynamics (MDH), and tissue magnetic susceptibility differences have all been proposed as possible mechanisms for this effect. In this article, we examine the theory underlying each of these mechanisms and explore resulting predictions. Experimental evidence is summarised in the following findings: 30% of subjects display a postural sway response at a field-gradient product of 1 T(2)m(-1); a determining factor for experience of vertigo is the total unipolar integrated field change over a period greater than 1 s; the perception of dizziness is not necessarily related to a high value of the rate of change of magnetic field; eight of ten subjects reported sensations ranging from mild to severe when exposed to a magnetic field change of the order of 4.7 T in 1.9 s; no subjects reported any response when exposed to 50 ms pulses of dB/dt of 2 Ts(-1) amplitude. The experimental evidence supports the hypothesis that magnetic-field related vertigo results from both magnetic susceptibility differences between vestibular organs and surrounding fluid, and induced currents acting on the vestibular hair cells. Both mechanisms are consistent with theoretical predictions.

Specialty section: This article was submitted to Neuro-otology, a section of the journal Frontiers in Neurology