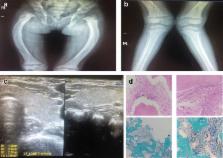 Effect of serum parathyroid hormone and bone marrow fibrosis on the response to erythropoietin in uremia.

Rita S M Shih,  R Mohini,  D. C. Rao (1993)
Anemia is common in patients with chronic renal insufficiency and secondary hyperparathyroidism. Erythropoietin therapy is effective, but the dose required varies greatly. One possible determinant of the efficacy of erythropoietin therapy is the extent of marrow fibrosis caused by hyperparathyroidism. We examined the relation between the erythropoietic response to erythropoietin and hyperparathyroidism in a cross-sectional study of 18 patients undergoing hemodialysis who had received erythropoietin therapy for one to three years. In 7 patients (the poor-response group), the dose of intravenous erythropoietin needed to maintain a mean (+/- SD) target hematocrit of 35 +/- 3 percent was > 100 units per kilogram of body weight three times a week, and in 11 patients (the good-response group) it was < or = 100 units per kilogram. In all patients, indexes of the adequacy of dialysis and the extent of hyperparathyroidism and aluminum toxicity were determined monthly, and bone histomorphometry was performed. The mean (+/- SD) dose of erythropoietin required to maintain the target hematocrit was 174 +/- 33 units per kilogram three times a week in the poor-response group and 56 +/- 18 units per kilogram in the good-response group. The mean ages, duration and adequacy of dialysis, increment in hematocrit, iron requirements, and serum concentrations of calcium, phosphate, and aluminum were similar in the two groups. The percentages of osteoid volume and surface, the osteoid thickness, and the stainable aluminum content of bone were similar in the two groups. In contrast, the mean serum parathyroid hormone concentration, the percentages of osteoclastic and eroded bone surfaces, and the degree of marrow fibrosis were greater in the poor-response group than in the good-response group (P = 0.03, P = 0.04, P = 0.009, and P = 0.009, respectively). In patients with uremia, the dose of erythropoietin needed to achieve an adequate hematocrit response may depend on the severity of secondary hyperparathyroidism and the extent of bone marrow fibrosis.

Hermann Haller,  Wilfried Gwinner,  Anke Schwarz … (2005)
Interstitial calcification has been described in renal allografts, however, the etiology and significance of this finding for the graft are unclear. The aim of this study was to examine calcification in serial protocol biopsies, to test the hypothesis that calcification is related to parameters of calcium homeostasis in these patients and to analyze a possible relation between calcification and graft function at 1 year. We studied 213 patients with 586 protocol biopsies obtained 6 weeks, 3 and 6 months after transplantation. Calcifications increased over time, from 6.1% at 6 weeks to 17.8% at 6 months. Out of the 213 patients, 56 had calcification in one or more biopsies. Patients age and gender, underlying renal disease, dialysis mode and duration, previous transplantations, donor type, age and gender, HLA matches and ischemia time had no influence on calcification. Calcification was not related to rejection episodes, acute tubular lesions, calcineurin inhibitor toxicity or tubulointerstitial fibrosis and tubular atrophy. Patients with calcification had significantly higher serum parathormone and calcium levels. In patients with calcification, high PTH levels correlated with an inferior outcome of graft function at 1 year after transplantation (p<0.05). Therefore, treatment of hyperparathyroidism should be considered earlier and more often in these patients.

Improvement in hypercalcemia with cinacalcet after kidney transplantation.