Disparities in Rural Tobacco Use, Smoke-Free Policies, and Tobacco Taxes 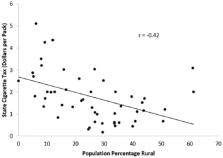 Tobacco use and exposure to secondhand smoke (SHS) remain leading causes of preventable disease, disability, and mortality in the United States. Rural populations are among those being left behind in the recent declining smoking rates and have become a focus of discussions on tobacco-related disparities. This article describes tobacco-related disparities in rural populations including tobacco use, exposure to SHS, smoke-free policies, and tobacco taxes. Nurses, as social justice and tobacco control policy advocates, are needed especially at the local level, where much of the policy work occurs and where nursing’s voice is respected and can be powerful.

Frank J. Chaloupka, Ayda Yurekli, Geoffrey Fong (2012)
Increases in tobacco taxes are widely regarded as a highly effective strategy for reducing tobacco use and its consequences. The voluminous literature on tobacco taxes is assessed, drawing heavily from seminal and recent publications reviewing the evidence on the impact of tobacco taxes on tobacco use and related outcomes, as well as that on tobacco tax administration. Well over 100 studies, including a growing number from low-income and middle-income countries, clearly demonstrate that tobacco excise taxes are a powerful tool for reducing tobacco use while at the same time providing a reliable source of government revenues. Significant increases in tobacco taxes that increase tobacco product prices encourage current tobacco users to stop using, prevent potential users from taking up tobacco use, and reduce consumption among those that continue to use, with the greatest impact on the young and the poor. Global experiences with tobacco taxation and tax administration have been used by WHO to develop a set of 'best practices' for maximising the effectiveness of tobacco taxation. Significant increases in tobacco taxes are a highly effective tobacco control strategy and lead to significant improvements in public health. The positive health impact is even greater when some of the revenues generated by tobacco tax increases are used to support tobacco control, health promotion and/or other health-related activities and programmes. In general, oppositional arguments that higher taxes will have harmful economic effects are false or overstated.

Tobacco Use Among Middle and High School Students — United States, 2011–2014