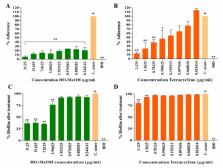 The Gram-positive bacterium Cutibacterium acnes (previously Propionibacterium acnes), plays an important role in the pathogenesis and progression of the dermatological skin disorder acne vulgaris. The methanolic extract of Helichrysum odoratissimum (L.) Sweet (HO-MeOH) was investigated for its ability to target bacterial growth and pathogenic virulence factors associated with acne progression. The gas chromatography–mass spectrometry (GC-MS) analysis of HO-MeOH identified α-humulene (3.94%), α-curcumene (3.74%), and caryophyllene (8.12%) as major constituents, which correlated with previous reports of other Helichrysum species. The HO-MeOH extract exhibited potent antimicrobial activity against C. acnes (ATCC 6919) with a minimum inhibitory concentration (MIC) of 7.81 µg/ml. It enhanced the antimicrobial activity of benzoyl peroxide (BPO). The extract showed high specificity against C. acnes cell aggregation at sub-inhibitory concentrations, preventing biofilm formation. Mature C. acnes biofilms were disrupted at a sub-inhibitory concentration of 3.91 µg/ml. At 100 µg/ml, HO-MeOH reduced interleukin-1α (IL-1α) cytokine levels in C. acnes-induced human keratinocytes (HaCaT) by 11.08%, highlighting its potential as a comedolytic agent for the treatment of comedonal acne. The extract exhibited a 50% inhibitory concentration (IC 50) of 157.50 µg/ml against lipase enzyme activity, an enzyme responsible for sebum degradation, ultimately causing inflammation. The extract’s anti-inflammatory activity was tested against various targets associated with inflammatory activation by the bacterium. The extract inhibited pro-inflammatory cytokine levels of IL-8 by 48.31% when compared to C. acnes-induced HaCaT cells at 7.81 µg/ml. It exhibited cyclooxygenase-II (COX-II) enzyme inhibition with an IC 50 of 22.87 µg/ml. Intracellular nitric oxide (NO) was inhibited by 40.39% at 7.81 µg/ml when compared with NO production in lipopolysaccharide (LPS)-induced RAW264.7 cells. The intracellular NO inhibition was potentially due to the 2.14 fold reduction of inducible nitric oxide synthase (iNOS) gene expression. The HO-MeOH extract exhibited an IC 50 of 145.45 µg/ml against virulent hyaluronidase enzyme activity, which is responsible for hyaluronan degradation and scar formation. This study provides scientific validation for the traditional use of H. odoratissimum as an ointment for pimples, not only due to its ability to control C. acnes proliferation but also due to its inhibitory activity on various targets associated with bacterial virulence leading to acne progression.

Comparison of multiple methods for quantification of microbial biofilms grown in microtiter plates.

Hans Nelis,  Elke Peeters,  Tom Coenye (2008)
In the present study six assays for the quantification of biofilms formed in 96-well microtiter plates were optimised and evaluated: the crystal violet (CV) assay, the Syto9 assay, the fluorescein diacetate (FDA) assay, the resazurin assay, the XTT assay and the dimethyl methylene blue (DMMB) assay. Pseudomonas aeruginosa, Burkholderia cenocepacia, Staphylococcus aureus, Propionibacterium acnes and Candida albicans were used as test organisms. In general, these assays showed a broad applicability and a high repeatability for most isolates. In addition, the estimated numbers of CFUs present in the biofilms show limited variations between the different assays. Nevertheless, our data show that some assays are less suitable for the quantification of biofilms of particular isolates (e.g. the CV assay for P. aeruginosa).

Dianella Savoia (2012)
The increasing incidence of drug-resistant pathogens has drawn the attention of the pharmaceutical and scientific communities towards studies on the potential antimicrobial activity of plant-derived substances, an untapped source of antimicrobial chemotypes, which are used in traditional medicine in different countries. The aim of this review is to provide recent insights regarding the possibilities of the most important natural antimicrobial compounds derived from plant sources containing a wide variety of secondary metabolites, which are useful as alternative strategies to control infectious diseases. This review will focus on natural plant products as a useful source of antimicrobial molecules, active in particular, on bacteria and fungi. When considering that many of these compounds, which have been used for centuries, are a source of new drugs and that there are ever-increasing technical breakthroughs, it can be envisaged that in the next years some different molecules discovered by ingenious screening programs and obtained from different plant oils and extracts will become useful therapeutic tools.

Yvonne Achermann,  Ellie Goldstein,  Tom Coenye … (2014)
Propionibacterium acnes is known primarily as a skin commensal. However, it can present as an opportunistic pathogen via bacterial seeding to cause invasive infections such as implant-associated infections. These infections have gained more attention due to improved diagnostic procedures, such as sonication of explanted foreign materials and prolonged cultivation time of up to 14 days for periprosthetic biopsy specimens, and improved molecular methods, such as broad-range 16S rRNA gene PCR. Implant-associated infections caused by P. acnes are most often described for shoulder prosthetic joint infections as well as cerebrovascular shunt infections, fibrosis of breast implants, and infections of cardiovascular devices. P. acnes causes disease through a number of virulence factors, such as biofilm formation. P. acnes is highly susceptible to a wide range of antibiotics, including beta-lactams, quinolones, clindamycin, and rifampin, although resistance to clindamycin is increasing. Treatment requires a combination of surgery and a prolonged antibiotic treatment regimen to successfully eliminate the remaining bacteria. Most authors suggest a course of 3 to 6 months of antibiotic treatment, including 2 to 6 weeks of intravenous treatment with a beta-lactam. While recently reported data showed a good efficacy of rifampin against P. acnes biofilms, prospective, randomized, controlled studies are needed to confirm evidence for combination treatment with rifampin, as has been performed for staphylococcal implant-associated infections.