Human Polyomaviruses: The Battle of Large and Small Tumor Antigens 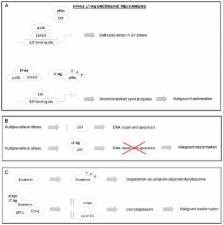 About 40 years ago, the large and small tumor antigens (LT-Ag and sT-Ag) of the polyomavirus (PyVs) simian vacuolating virus 40 have been identified and characterized. To date, it is well known that all the discovered human PyVs (HPyVs) encode these 2 multifunctional and tumorigenic proteins, expressed at viral replication early stage. The 2 T-Ags are able to transform cells both in vitro and in vivo and seem to play a distinct role in the pathogenesis of some tumors in humans. In addition, they are involved in viral DNA replication, transcription, and virion assembly. This short review focuses on the structural and functional features of the HPyVs’ LT-Ag and sT-Ag, with special attention to their transforming properties.

Axin, a negative regulator of the Wnt signaling pathway, forms a complex with GSK-3beta and beta-catenin and promotes GSK-3beta-dependent phosphorylation of beta-catenin.

A. Kikuchi,  S Kishida,  H Murai … (1998)
Glycogen synthase kinase-3 (GSK-3) mediates epidermal growth factor, insulin and Wnt signals to various downstream events such as glycogen metabolism, gene expression, proliferation and differentiation. We have isolated here a GSK-3beta-interacting protein from a rat brain cDNA library using a yeast two-hybrid method. This protein consists of 832 amino acids and possesses Regulators of G protein Signaling (RGS) and dishevelled (Dsh) homologous domains in its N- and C-terminal regions, respectively. The predicted amino acid sequence of this GSK-3beta-interacting protein shows 94% identity with mouse Axin, which recently has been identified as a negative regulator of the Wnt signaling pathway; therefore, we termed this protein rAxin (rat Axin). rAxin interacted directly with, and was phosphorylated by, GSK-3beta. rAxin also interacted directly with the armadillo repeats of beta-catenin. The binding site of rAxin for GSK-3beta was distinct from the beta-catenin-binding site, and these three proteins formed a ternary complex. Furthermore, rAxin promoted GSK-3beta-dependent phosphorylation of beta-catenin. These results suggest that rAxin negatively regulates the Wnt signaling pathway by interacting with GSK-3beta and beta-catenin and mediating the signal from GSK-3beta to beta-catenin.

P Randhawa,  Hans H. Hirsch,   (2013)
The human BK polyomavirus (BKV) is the major cause of polyomavirus-associated nephropathy (PyVAN) putting 1-15% of kidney transplant patients at risk of premature allograft failure, but is less common in other solid organ transplants. Because effective antiviral therapies are lacking, screening kidney transplant patients for BKV replication in urine and blood has become the key recommendation to guide the reduction of immunosuppression in patients with BKV viremia. This intervention allows for expanding BKV-specific cellular immune responses, curtailing of BKV replication in the graft, and clearance of BKV viremia in 70-90% patients. Postintervention rejection episodes occur in 8-12%, most of which are corticosteroid responsive. Late diagnosis is faced with irreversible functional decline, poor treatment response, and graft loss. Adjunct therapies such as cidofovir, leflunomide and intravenous immunoglobulins have been used, but the benefit is not documented in trials. Retransplantation after PyVAN is largely successful, but requires close monitoring for recurrent BKV viremia. © Copyright 2013 The American Society of Transplantation and the American Society of Transplant Surgeons.