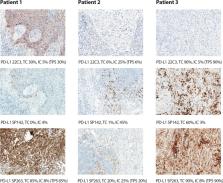 The goal of the CLOVER study was to perform a pairwise comparison of four tests based on the same patient population with non-small cell lung cancer (NSCLC): three validated PDL1 immunohistochemistry (IHC) assays (Ventana SP142, Ventana SP263, Dako 22C3) and one PCR test. Four hundred seventy-three NSCLC samples were obtained from a biobank and were stained using PDL1 IHC assays. Four trained pathologists independently evaluated the percentage of tumor cells (TC) and immune cells (IC) that stained positive at any intensity. PDL1 transcripts were quantified in 437 patients by a standard Taqman RT-PCR assay using SDHA as a reference gene. A concordance analysis was performed to assess (1) the correlation of TC and IC between different assays and (2) the predictive properties of one test for another. “High” RNA expression was detected in 187 of 437 (43%) patients. The percentage of PDL1-positive cells (≥1%) was higher among the IC than the TC in all IHC three assays. The Pearson correlation coefficients (PCC) for TC were 0.71, 0.87, and 0.75 between 22C3/SP142, 22C3/SP263, and SP263/SP142, respectively. The PCC for IC were 0.45, 0.61, and 0.68 for the same pairs. A low correlation was observed between the PCR test and each of the three IHC assays; however, if a patient tested low/negative by PCR, then they were likely to test negative by any single IHC test with a high probability (92–99%). Among patients who tested positive by PCR, only 9–45% tested positive by IHC assays. There was excellent positive and negative agreement (>91%) between 22C3 and SP263 staining using the recommended individual cutoffs for first-line treatment. PCR RNA expression analysis is not equivalent to IHC. However, this method may have some potential for the identification of PDL1-negative tumors. 22C3 could be considered as a substitute for SP263 in first-line treatment.

Larisa Zavalishina, Ilya V Tsimafeyeu, Patrisia Povilaitite … (2018)
In this collaborative study by the Russian Society of Clinical Oncology and the Russian Society of Pathology, we assessed the concordance among three validated, commercially available PD-L1 immunohistochemistry assays for patients with urothelial cancer. Tumors from 100 urothelial cancer patients were stained with the antibody clones 22C3 (Agilent), SP142 (Ventana Medical Systems), and SP263 (Ventana Medical Systems), which are used in clinical trials of second-line therapy with checkpoint inhibitors. Four trained pathologists independently evaluated the percentages of tumor cells (TC) and tumor-infiltrating immune cells (IC) that were stained at any intensity by each of the antibodies. The test-specific cutoffs for the proportions of stained cells in a positive sample were pre-specified as TC + IC ≥ 10% or TC ≥ 10% for 22C3, IC ≥ 5% for SP142, and TC ≥ 25% or IC ≥ 25% for SP263. Three hundred immunohistochemistry slides were scored. The percentages of PD-L1 staining in the three assays without using any cutoff were higher in the IC than in the TC (55% versus 24% for 22C3, 45% versus 8% for SP142, and 72% versus 27% for SP263, respectively). The Pearson correlation coefficients for anti-PD-L1 staining in the IC were 0.5, 0.69, and 0.85 with 22C3/SP142, 22C3/SP263, and SP142/SP263, respectively. The Pearson correlation coefficients for PD-L1 staining in the TC were 0.93, 0.99, and 0.91 for the same pairs. Among the patients who were negative for PD-L1 staining by one test, 91-100% were also negative by the other tests. Among the patients who were positive by one test, 43-100% were also positive by the other tests. Our data indicate that repeated testing can be avoided as a patient with urothelial cancer who is classified as negative for PD-L1 expression by one of the three single tests using the corresponding cutoff rule is highly likely (91-100%) to be classified as negative by either of the other tests.