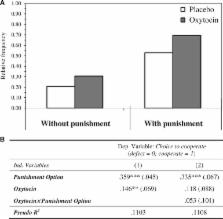 The role of neuromodulators in the enforcement of cooperation is still not well understood. Here, we provide evidence that intranasal applied oxytocin, an important hormone for modulating social behavior, enhances the inclination to sanction free-riders in a social dilemma situation. Contrary to the notion of oxytocin being a pro-social hormone, we found that participants treated with oxytocin exhibited an amplification of self-reported negative social emotions such as anger towards free-riders, ultimately resulting in higher magnitude and frequency of punishment of free-riders compared to placebo. Furthermore, we found initial evidence that oxytocin contributes to the positive effects of a punishment institution by rendering cooperation preferable in the oxytocin condition for even the most selfish players when punishment was available. Together, these findings imply that the neural circuits underlying altruistic punishment are partly targeted by the oxytonergic system and highlight the importance of neuromodulators in group cohesion and norm enforcement within social groups.

The neural basis of altruistic punishment.

Ulrich Schnyder,  Melanie Schellhammer,  Alfred Buck … (2004)
Many people voluntarily incur costs to punish violations of social norms. Evolutionary models and empirical evidence indicate that such altruistic punishment has been a decisive force in the evolution of human cooperation. We used H2 15O positron emission tomography to examine the neural basis for altruistic punishment of defectors in an economic exchange. Subjects could punish defection either symbolically or effectively. Symbolic punishment did not reduce the defector's economic payoff, whereas effective punishment did reduce the payoff. We scanned the subjects' brains while they learned about the defector's abuse of trust and determined the punishment. Effective punishment, as compared with symbolic punishment, activated the dorsal striatum, which has been implicated in the processing of rewards that accrue as a result of goal-directed actions. Moreover, subjects with stronger activations in the dorsal striatum were willing to incur greater costs in order to punish. Our findings support the hypothesis that people derive satisfaction from punishing norm violations and that the activation in the dorsal striatum reflects the anticipated satisfaction from punishing defectors.

Gregor Domes,  Markus Heinrichs,  Andre Michel … (2007)
The ability to "read the mind" of other individuals, that is, to infer their mental state by interpreting subtle social cues, is indispensable in human social interaction. The neuropeptide oxytocin plays a central role in social approach behavior in nonhuman mammals. In a double-blind, placebo-controlled, within-subject design, 30 healthy male volunteers were tested for their ability to infer the affective mental state of others using the Reading the Mind in the Eyes Test (RMET) after intranasal administration of 24 IU oxytocin. Oxytocin improved performance on the RMET compared with placebo. This effect was pronounced for difficult compared with easy items. Our data suggest that oxytocin improves the ability to infer the mental state of others from social cues of the eye region. Oxytocin might play a role in the pathogenesis of autism spectrum disorder, which is characterized by severe social impairment.

Elissar Andari,  Evelyn Herbrecht,  Jean-René Duhamel … (2010)
Social adaptation requires specific cognitive and emotional competences. Individuals with high-functioning autism or with Asperger syndrome cannot understand or engage in social situations despite preserved intellectual abilities. Recently, it has been suggested that oxytocin, a hormone known to promote mother-infant bonds, may be implicated in the social deficit of autism. We investigated the behavioral effects of oxytocin in 13 subjects with autism. In a simulated ball game where participants interacted with fictitious partners, we found that after oxytocin inhalation, patients exhibited stronger interactions with the most socially cooperative partner and reported enhanced feelings of trust and preference. Also, during free viewing of pictures of faces, oxytocin selectively increased patients' gazing time on the socially informative region of the face, namely the eyes. Thus, under oxytocin, patients respond more strongly to others and exhibit more appropriate social behavior and affect, suggesting a therapeutic potential of oxytocin through its action on a core dimension of autism.