α-Mangostin from Cratoxylum arborescens demonstrates apoptogenesis in MCF-7 with regulation of NF-κB and Hsp70 protein modulation in vitro, and tumor reduction in vivo 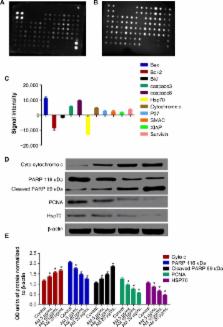 Cratoxylum arborescens is an equatorial plant belonging to the family Guttiferae. In the current study, α-Mangostin (AM) was isolated and its cell death mechanism was studied. HCS was undertaken to detect the nuclear condensation, mitochondrial membrane potential, cell permeability, and the release of cytochrome c. An investigation for reactive oxygen species formation was conducted using fluorescent analysis. To determine the mechanism of cell death, human apoptosis proteome profiler assay was conducted. In addition, using immunofluorescence and immunoblotting, the levels of Bcl-2-associated X protein (Bax) and B-cell lymphoma (Bcl)-2 proteins were also tested. Caspaces such as 3/7, 8, and 9 were assessed during treatment. Using HCS and Western blot, the contribution of nuclear factor kappa-B (NF-κB) was investigated. AM had showed a selective cytotoxicity toward the cancer cells with no toxicity toward the normal cells even at 30 μg/mL, thereby indicating that AM has the attributes to induce cell death in tumor cells. The treatment of MCF-7 cells with AM prompted apoptosis with cell death-transducing signals. This regulated the mitochondrial membrane potential by down-regulation of Bcl-2 and up-regulation of Bax, thereby causing the release of cytochrome c from the mitochondria into the cytosol. The liberation of cytochrome c activated caspace-9, which, in turn, activated the downstream executioner caspace-3/7 with the cleaved poly (ADP-ribose) polymerase protein, thereby leading to apoptotic alterations. Increase of caspace 8 had showed the involvement of an extrinsic pathway. This type of apoptosis was suggested to occur through both extrinsic and intrinsic pathways and prevention of translocation of NF-κB from the cytoplasm to the nucleus. Our results revealed AM prompt apoptosis of MCF-7 cells through NF-κB, Bax/Bcl-2 and heat shock protein 70 modulation with the contribution of caspaces. Moreover, ingestion of AM at (30 and 60 mg/kg) significantly reduced tumor size in an animal model of breast cancer. Our results suggest that AM is a potentially useful agent for the treatment of breast cancer.

Global estimates of cancer prevalence for 27 sites in the adult population in 2008.

Freddie Bray,  Jian-Song Ren,  Eric Masuyer … (2013)
Recent estimates of global cancer incidence and survival were used to update previous figures of limited duration prevalence to the year 2008. The number of patients with cancer diagnosed between 2004 and 2008 who were still alive at the end of 2008 in the adult population is described by world region, country and the human development index. The 5-year global cancer prevalence is estimated to be 28.8 million in 2008. Close to half of the prevalence burden is in areas of very high human development that comprise only one-sixth of the world's population. Breast cancer continues to be the most prevalent cancer in the vast majority of countries globally; cervix cancer is the most prevalent cancer in much of Sub-Saharan Africa and Southern Asia and prostate cancer dominates in North America, Oceania and Northern and Western Europe. Stomach cancer is the most prevalent cancer in Eastern Asia (including China); oral cancer ranks as the most prevalent cancer in Indian men and Kaposi sarcoma has the highest 5-year prevalence among men in 11 countries in Sub-Saharan Africa. The methods used to estimate point prevalence appears to give reasonable results at the global level. The figures highlight the need for long-term care targeted at managing patients with certain very frequently diagnosed cancer forms. To be of greater relevance to cancer planning, the estimation of other time-based measures of global prevalence is warranted. Copyright © 2012 UICC.

A conserved XIAP-interaction motif in caspase-9 and Smac/DIABLO regulates caspase activity and apoptosis.

R DeVille,  P. Datta,  Doaa Saleh … (2001)
X-linked inhibitor-of-apoptosis protein (XIAP) interacts with caspase-9 and inhibits its activity, whereas Smac (also known as DIABLO) relieves this inhibition through interaction with XIAP. Here we show that XIAP associates with the active caspase-9-Apaf-1 holoenzyme complex through binding to the amino terminus of the linker peptide on the small subunit of caspase-9, which becomes exposed after proteolytic processing of procaspase-9 at Asp315. Supporting this observation, point mutations that abrogate the proteolytic processing but not the catalytic activity of caspase-9, or deletion of the linker peptide, prevented caspase-9 association with XIAP and its concomitant inhibition. We note that the N-terminal four residues of caspase-9 linker peptide share significant homology with the N-terminal tetra-peptide in mature Smac and in the Drosophila proteins Hid/Grim/Reaper, defining a conserved class of IAP-binding motifs. Consistent with this finding, binding of the caspase-9 linker peptide and Smac to the BIR3 domain of XIAP is mutually exclusive, suggesting that Smac potentiates caspase-9 activity by disrupting the interaction of the linker peptide of caspase-9 with BIR3. Our studies reveal a mechanism in which binding to the BIR3 domain by two conserved peptides, one from Smac and the other one from caspase-9, has opposing effects on caspase activity and apoptosis.