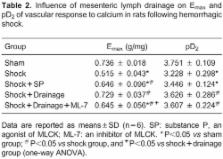 Vascular hyporeactivity is an important factor in irreversible shock, and post-shock mesenteric lymph (PSML) blockade improves vascular reactivity after hemorrhagic shock. This study explored the possible involvement of myosin light chain kinase (MLCK) in PSML-mediated vascular hyporeactivity and calcium desensitization. Rats were divided into sham (n=12), shock (n=18), and shock+drainage (n=18) groups. A hemorrhagic shock model (40±2 mmHg, 3 h) was established in the shock and shock+drainage groups. PSML drainage was performed from 1 to 3 h from start of hypotension in shock+drainage rats. Levels of phospho-MLCK (p-MLCK) were determined in superior mesenteric artery (SMA) tissue, and the vascular reactivity to norepinephrine (NE) and sensitivity to Ca 2+ were observed in SMA rings in an isolated organ perfusion system. p-MLCK was significantly decreased in the shock group compared with the sham group, but increased in the shock+drainage group compared with the shock group. Substance P (1 nM), an agonist of MLCK, significantly elevated the decreased contractile response of SMA rings to both NE and Ca 2+ at various concentrations. Maximum contractility (E max) in the shock group increased with NE (from 0.179±0.038 to 0.440±0.177 g/mg, P<0.05) and Ca 2+ (from 0.515±0.043 to 0.646±0.096 g/mg, P<0.05). ML-7 (0.1 nM), an inhibitor of MLCK, reduced the increased vascular response to NE and Ca 2+ at various concentrations in the shock+drainage group (from 0.744±0.187 to 0.570±0.143 g/mg in E max for NE and from 0.729±0.037 to 0.645±0.056 g/mg in E max for Ca 2+, P<0.05). We conclude that MLCK is an important contributor to PSML drainage, enhancing vascular reactivity and calcium sensitivity in rats with hemorrhagic shock.

Fluid resuscitation: past, present, and the future.

Heena P Santry, Hasan Alam (2010)
Hemorrhage remains a major cause of preventable death following both civilian and military trauma. The goals of resuscitation in the face of hemorrhagic shock are restoring end-organ perfusion and maintaining tissue oxygenation while attempting definitive control of bleeding. However, if not performed properly, resuscitation can actually exacerbate cellular injury caused by hemorrhagic shock, and the type of fluid used for resuscitation plays an important role in this injury pattern. This article reviews the historical development and scientific underpinnings of modern resuscitation techniques. We summarized data from a number of studies to illustrate the differential effects of commonly used resuscitation fluids, including isotonic crystalloids, natural and artificial colloids, hypertonic and hyperoncotic solutions, and artificial oxygen carriers, on cellular injury and how these relate to clinical practice. The data reveal that a uniformly safe, effective, and practical resuscitation fluid when blood products are unavailable and direct hemorrhage control is delayed has been elusive. Yet, it is logical to prevent this cellular injury through wiser resuscitation strategies than attempting immunomodulation after the damage has already occurred. Thus, we describe how some novel resuscitation strategies aimed at preventing or ameliorating cellular injury may become clinically available in the future.

Vascular hyporesponsiveness to vasopressors in septic shock: from bench to bedside.

N Ducrocq, P. Rodriguez Perez, N Sennoun … (2010)
To delineate some of the characteristics of septic vascular hypotension, to assess the most commonly cited and reported underlying mechanisms of vascular hyporesponsiveness to vasoconstrictors in sepsis, and to briefly outline current therapeutic strategies and possible future approaches. Source data were obtained from a PubMed search of the medical literature with the following MeSH terms: Muscle, smooth, vascular/physiopathology; hypotension/etiology; shock/physiopathology; vasodilation/physiology; shock/therapy; vasoconstrictor agents. Nitric oxide (NO) and peroxynitrite are crucial components implicated in vasoplegia and vascular hyporeactivity. Vascular ATP-sensitive and calcium-activated potassium channels are activated during shock and participate in hypotension. In addition, shock state is characterized by inappropriately low plasma glucocorticoid and vasopressin concentrations, a dysfunction and desensitization of alpha-receptors, and an inactivation of catecholamines by oxidation. Numerous other mechanisms have been individualized in animal models, the great majority of which involve NO: MEK1/2-ERK1/2 pathway, H(2)S, hyperglycemia, and cytoskeleton dysregulation associated with decreased actin expression. Many therapeutic approaches have proven their efficiency in animal models, especially therapies directed against one particular compound, but have otherwise failed when used in human shock. Nevertheless, high doses of catecholamines, vasopressin and terlipressin, hydrocortisone, activated protein C, and non-specific shock treatment have demonstrated a partial efficiency in reversing sepsis-induced hypotension.