Wild and synanthropic reservoirs of Leishmania species in the Americas 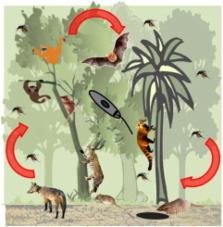 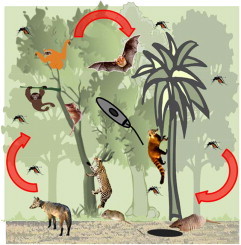 The definition of a reservoir has changed significantly in the last century, making it necessary to study zoonosis from a broader perspective. One important example is that of Leishmania, zoonotic multi-host parasites maintained by several mammal species in nature. The magnitude of the health problem represented by leishmaniasis combined with the complexity of its epidemiology make it necessary to clarify all of the links in transmission net, including non-human mammalian hosts, to develop effective control strategies. Although some studies have described dozens of species infected with these parasites, only a minority have related their findings to the ecological scenario to indicate a possible role of that host in parasite maintenance and transmission. Currently, it is accepted that a reservoir may be one or a complex of species responsible for maintaining the parasite in nature. A reservoir system should be considered unique on a given spatiotemporal scale. In fact, the transmission of Leishmania species in the wild still represents an complex enzootic “puzzle”, as several links have not been identified. This review presents the mammalian species known to be infected with Leishmania spp. in the Americas, highlighting those that are able to maintain and act as a source of the parasite in nature (and are thus considered potential reservoirs). These host/reservoirs are presented separately in each of seven mammal orders – Marsupialia, Cingulata, Pilosa, Rodentia, Primata, Carnivora, and Chiroptera – responsible for maintaining Leishmania species in the wild.

Identifying Reservoirs of Infection: A Conceptual and Practical Challenge

(2002)
Many infectious agents, especially those that cause emerging diseases, infect more than one host species. Managing reservoirs of multihost pathogens often plays a crucial role in effective disease control. However, reservoirs remain variously and loosely defined. We propose that reservoirs can only be understood with reference to defined target populations. Therefore, we define a reservoir as one or more epidemiologically connected populations or environments in which the pathogen can be permanently maintained and from which infection is transmitted to the defined target population. Existence of a reservoir is confirmed when infection within the target population cannot be sustained after all transmission between target and nontarget populations has been eliminated. When disease can be controlled solely by interventions within target populations, little knowledge of potentially complex reservoir infection dynamics is necessary for effective control. We discuss the practical value of different approaches that may be used to identify reservoirs in the field.

Daniel T Haydon,  L. Taylor,  M. E. J. Woolhouse (2001)
The majority of pathogens, including many of medical and veterinary importance, can infect more than one species of host. Population biology has yet to explain why perceived evolutionary advantages of pathogen specialization are, in practice, outweighed by those of generalization. Factors that predispose pathogens to generalism include high levels of genetic diversity and abundant opportunities for cross-species transmission, and the taxonomic distributions of generalists and specialists appear to reflect these factors. Generalism also has consequences for the evolution of virulence and for pathogen epidemiology, making both much less predictable. The evolutionary advantages and disadvantages of generalism are so finely balanced that even closely related pathogens can have very different host range sizes.