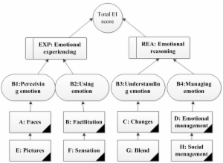 Research on emotional intelligence (EI) suggests that it is associated with more pro-social behavior, better academic performance and improved empathy towards patients. In medical education and clinical practice, EI has been related to higher academic achievement and improved doctor-patient relationships. This study examined the effect of EI on academic performance in first- and final-year medical students in Malaysia.

This was a cross-sectional study using an objectively-scored measure of EI, the Mayer-Salovey-Caruso Emotional Intelligence Test (MSCEIT). Academic performance of medical school students was measured using continuous assessment (CA) and final examination (FE) results. The first- and final-year students were invited to participate during their second semester. Students answered a paper-based demographic questionnaire and completed the online MSCEIT on their own. Relationships between the total MSCEIT score to academic performance were examined using multivariate analyses.

A total of 163 (84 year one and 79 year five) medical students participated (response rate of 66.0%). The gender and ethnic distribution were representative of the student population. The total EI score was a predictor of good overall CA (OR 1.01), a negative predictor of poor result in overall CA (OR 0.97), a predictor of the good overall FE result (OR 1.07) and was significantly related to the final-year FE marks (adjusted R 2 = 0.43).

Medical students who were more emotionally intelligent performed better in both the continuous assessments and the final professional examination. Therefore, it is possible that emotional skill development may enhance medical students’ academic performance.

The Buckingham Journal of Education

Craig Brackett,  J Mayer (2003)
This study investigated the convergent, discriminant, and incremental validity of one ability test of emotional intelligence (EI)--the Mayer-Salovey-Caruso-Emotional Intelligence Test (MSCEIT)--and two self-report measures of EI--the Emotional Quotient Inventory (EQ-i) and the self-report EI test (SREIT). The MSCEIT showed minimal relations to the EQ-i and SREIT, whereas the latter two measures were moderately interrelated. Among EI measures, the MSCEIT was discriminable from well-studied personality and well-being measures, whereas the EQ-i and SREIT shared considerable variance with these measures. After personality and verbal intelligence were held constant, the MSCEIT was predictive of social deviance, the EQ-i was predictive of alcohol use, and the SREIT was inversely related to academic achievement. In general, results showed that ability EI and self-report EI are weakly related and yield different measurements of the same person.

Dana Joseph,  Daniel A Newman (2010)
Research and valid practice in emotional intelligence (EI) have been impeded by lack of theoretical clarity regarding (a) the relative roles of emotion perception, emotion understanding, and emotion regulation facets in explaining job performance; (b) conceptual redundancy of EI with cognitive intelligence and Big Five personality; and (c) application of the EI label to 2 distinct sets of constructs (i.e., ability-based EI and mixed-based EI). In the current article, the authors propose and then test a theoretical model that integrates these factors. They specify a progressive (cascading) pattern among ability-based EI facets, in which emotion perception must causally precede emotion understanding, which in turn precedes conscious emotion regulation and job performance. The sequential elements in this progressive model are believed to selectively reflect Conscientiousness, cognitive ability, and Neuroticism, respectively. "Mixed-based" measures of EI are expected to explain variance in job performance beyond cognitive ability and personality. The cascading model of EI is empirically confirmed via meta-analytic data, although relationships between ability-based EI and job performance are shown to be inconsistent (i.e., EI positively predicts performance for high emotional labor jobs and negatively predicts performance for low emotional labor jobs). Gender and race differences in EI are also meta-analyzed. Implications for linking the EI fad in personnel selection to established psychological theory are discussed. Copyright 2009 APA, all rights reserved.

John Mayer,  Peter Salovey,  David Caruso (2008)
Some individuals have a greater capacity than others to carry out sophisticated information processing about emotions and emotion-relevant stimuli and to use this information as a guide to thinking and behavior. The authors have termed this set of abilities emotional intelligence (EI). Since the introduction of the concept, however, a schism has developed in which some researchers focus on EI as a distinct group of mental abilities, and other researchers instead study an eclectic mix of positive traits such as happiness, self-esteem, and optimism. Clarifying what EI is and is not can help the field by better distinguishing research that is truly pertinent to EI from research that is not. EI--conceptualized as an ability--is an important variable both conceptually and empirically, and it shows incremental validity for predicting socially relevant outcomes.