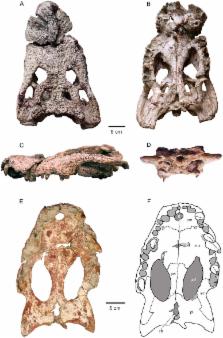 The late Campanian-early Maastrichtian site of Lo Hueco (Cuenca, Spain) has provided a set of well-preserved crocodyliform skull and lower jaw remains, which are described here and assigned to a new basal eusuchian taxon, Lohuecosuchus megadontos gen. et sp. nov. The reevaluation of a complete skull from the synchronous site of Fox-Amphoux (Department of Var, France) allows us to define a second species of this new genus. Phylogenetic analysis places Lohuecosuchus in a clade exclusively composed by European Late Cretaceous taxa. This new clade, defined here as Allodaposuchidae, is recognized as the sister group of Hylaeochampsidae, also comprised of European Cretaceous forms. Allodaposuchidae and Hylaeochampsidae are grouped in a clade identified as the sister group of Crocodylia, the only crocodyliform lineage that reaches our days. Allodaposuchidae shows a vicariant distribution pattern in the European Late Cretaceous archipelago, with several Ibero-Armorican forms more closely related to each other than with to Romanian Allodaposuchus precedens.

Island life in the Cretaceous - faunal composition, biogeography, evolution, and extinction of land-living vertebrates on the Late Cretaceous European archipelago

Zoltán Csiki-Sava,  Eric Buffetaut,  Attila Ősi … (2015)
Abstract The Late Cretaceous was a time of tremendous global change, as the final stages of the Age of Dinosaurs were shaped by climate and sea level fluctuations and witness to marked paleogeographic and faunal changes, before the end-Cretaceous bolide impact. The terrestrial fossil record of Late Cretaceous Europe is becoming increasingly better understood, based largely on intensive fieldwork over the past two decades, promising new insights into latest Cretaceous faunal evolution. We review the terrestrial Late Cretaceous record from Europe and discuss its importance for understanding the paleogeography, ecology, evolution, and extinction of land-dwelling vertebrates. We review the major Late Cretaceous faunas from Austria, Hungary, France, Spain, Portugal, and Romania, as well as more fragmentary records from elsewhere in Europe. We discuss the paleogeographic background and history of assembly of these faunas, and argue that they are comprised of an endemic ‘core’ supplemented with various immigration waves. These faunas lived on an island archipelago, and we describe how this insular setting led to ecological peculiarities such as low diversity, a preponderance of primitive taxa, and marked changes in morphology (particularly body size dwarfing). We conclude by discussing the importance of the European record in understanding the end-Cretaceous extinction and show that there is no clear evidence that dinosaurs or other groups were undergoing long-term declines in Europe prior to the bolide impact.

Alan Turner (2015)
The crocodyliform Shamosuchus is known from numerous Late Cretaceous localities in southern and eastern Mongolia and fragmentary remains from Uzbekistan. Seven species of Shamosuchus have been named from six localities in Mongolia and three in Uzbekistan. Six species originally described as Paralligator were later referred to Shamosuchus. Only the type species, Shamosuchus djadochtaensis has been examined in detail. Many of the named species of Shamosuchus show striking similarity in size and cranial morphology but most are based on partial remains suggesting that the true species diversity is overestimated. A review of all species referred to Shamosuchus recognizes three valid taxa: Shamosuchus djadochtaensis, S. gradilifrons, and S. major. Shamosuchus sungaricus, S. borealis, and S. karakalpakensis are nomena dubia, whereas S. ancestralis, S. ulgicus, S. tersus, and S. ulanicus are junior subjective synonyms of S. gradilifrons. Phylogenetic analysis of 318 phenotypic characters recovers a Paralligatoridae clade consisting of Shamosuchus, Rugosuchus, Batrachomimus, Glen Rose Form, and Wannchampsus. Shamosuchus is non-monophyletic: S. djadochtaensis is near the base of Paralligatoridae whereas S. gradilifrons + S. major are the most deeply nested. The name Paralligator is resurrected for this clade. Rugosuchus and Batrachomimus are sister taxa to Paralligator. Paralligatoridae is closely related to Theriosuchus, hylaeochampsids and a speciose Allodaposuchus clade, which together are the sister group of Borealosuchus plus Crocodylia. These results support the presence of a diverse clade in eastern Asia and western North America throughout the Cretaceous with origins in the Late Jurassic.

A New Crocodylian from the Late Maastrichtian of Spain: Implications for the Initial Radiation of Crocodyloids

Eduardo Puértolas-Pascual,  José I Canudo,  Penélope Cruzado-Caballero (2011)
Background The earliest crocodylians are known primarily from the Late Cretaceous of North America and Europe. The representatives of Gavialoidea and Alligatoroidea are known in the Late Cretaceous of both continents, yet the biogeographic origins of Crocodyloidea are poorly understood. Up to now, only one representative of this clade has been known from the Late Cretaceous, the basal crocodyloid Prodiplocynodon from the Maastrichtian of North America. Methodology/Principal Findings The fossil studied is a skull collected from sandstones in the lower part of the Tremp Formation, in Chron C30n, dated at −67.6 to 65.5 Ma (late Maastrichtian), in Arén (Huesca, Spain). It is located in a continuous section that contains the K/P boundary, in which the dinosaur faunas closest to the K/P boundary in Europe have been described, including Arenysaurus ardevoli and Blasisaurus canudoi. Phylogenetic analysis places the new taxon, Arenysuchus gascabadiolorum, at the base of Crocodyloidea. Conclusions/Significance The new taxon is the oldest crocodyloid representative in Eurasia. Crocodyloidea had previously only been known from the Palaeogene onwards in this part of Laurasia. Phylogenetically, Arenysuchus gascabadiolorum is situated at the base of the first radiation of crocodyloids that occurred in the late Maastrichtian, shedding light on this part of the cladogram. The presence of basal crocodyloids at the end of the Cretaceous both in North America and Europe provides new evidence of the faunal exchange via the Thulean Land Bridge during the Maastrichtian.

This work was supported by the Spanish Ministerio de Economía y Competitividad CGL2012-35199: IN, FE, APG, FO ( http://www.mineco.gob.es/portal/site/mineco/), US National Science Foundation DEB 1257786-125748: CAB ( http://www.nsf.gov/). The funders had no role in study design, data collection and analysis, decision to publish, or preparation of the manuscript.