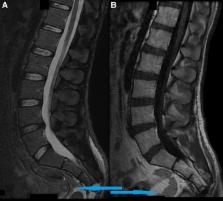 Keywords: neoplasm of the skeletal system

Chordoma is a rare, orphan cancer arising from embryonal precursors of bone. Surgery and radiotherapy (RT) provide excellent local control, often at the price of significant morbidity because of the structures involved and the need for relatively high doses of RT; however, recurrence remains high. Although our understanding of the genetic changes that occur in chordoma is evolving rapidly, this knowledge has yet to translate into treatments. We performed comprehensive DNA (paired tumor/normal whole-exome and shallow whole-genome) and RNA (tumor whole-transcriptome) next-generation sequencing analyses of archival sacral and clivus chordoma specimens. Incorporation of transcriptomic data enabled the identification of gene overexpression and expressed DNA alterations, thus providing additional support for potential therapeutic targets. In three patients, we identified alterations that may be amenable to off-label FDA-approved treatments for other tumor types. These alterations include FGFR1 overexpression (ponatinib, pazopanib) and copy-number duplication of CDK4 (palbociclib) and ERBB3 (gefitinib). In a third patient, germline DNA demonstrated predicted pathogenic changes in CHEK2 and ATM, which may have predisposed the patient to developing chordoma at a young age and may also be associated with potential sensitivity to PARP inhibitors because of homologous recombination repair deficiency. Last, in the fourth patient, a missense mutation in IGF1R was identified, suggesting potential activity for investigational anti-IGF1R strategies. Our findings demonstrate that chordoma patients present with aberrations in overlapping pathways. These results provide support for targeting the IGF1R/FGFR/EGFR and CDK4/6 pathways as treatment strategies for chordoma patients. This study underscores the value of comprehensive genomic and transcriptomic analysis in the development of rational, individualized treatment plans for chordoma.

Mercedes M Condy, Xuan Qin, Gary K. Schwartz … (2013)
CDK4 is amplified in > 90% of well-differentiated (WDLS) and dedifferentiated liposarcomas (DDLS). The selective cyclin-dependent kinase 4 (CDK4)/CDK6 inhibitor PD0332991 inhibits growth and induces senescence in cell lines and xenografts. In a phase I trial of PD0332991, several patients with WDLS or DDLS experienced prolonged stable disease. We performed an open-label phase II study to determine the safety and efficacy of PD0332991 in patients with advanced WDLS/DDLS. Patients age ≥ 18 years experiencing disease progression while receiving systemic therapy before enrollment received PD0332991 200 mg orally once per day for 14 consecutive days in 21-day cycles. All were required to have CDK4 amplification by fluorescence in situ hybridization and retinoblastoma protein (RB) expression by immunohistochemistry (≥ 1+). The primary end point was progression-free survival (PFS) at 12 weeks, with 12-week PFS of ≥ 40% considered promising and ≤ 20% not promising. If ≥ nine of 28 patients were progression free at 12 weeks, PD0332991 would be considered active. We screened 48 patients (44 of 48 had CDK4 amplification; 41 of 44 were RB positive). Of those, 30 were enrolled, and 29 were evaluable for the primary end point. Grade 3 to 4 events included anemia (17%), thrombocytopenia (30%), neutropenia (50%), and febrile neutropenia (3%). At 12 weeks, PFS was 66% (90% CI, 51% to 100%), significantly exceeding the primary end point. The median PFS was 18 weeks. There was one partial response. Treatment with the CDK4 inhibitor PD0332991 was associated with a favorable progression-free rate in patients with CDK4-amplified and RB-expressing WDLS/DDLS who had progressive disease despite systemic therapy.

Isa M Hussaini, Marc Hummersone, Mark Frigerio … (2009)
Ataxia telangiectasia (A-T) mutated (ATM) is critical for cell cycle checkpoints and DNA repair. Thus, specific small molecule inhibitors targeting ATM could perhaps be developed into efficient radiosensitizers. Recently, a specific inhibitor of the ATM kinase, KU-55933, was shown to radiosensitize human cancer cells. Herein, we report on an improved analogue of KU-55933 (KU-60019) with K(i) and IC(50) values half of those of KU-55933. KU-60019 is 10-fold more effective than KU-55933 at blocking radiation-induced phosphorylation of key ATM targets in human glioma cells. As expected, KU-60019 is a highly effective radiosensitizer of human glioma cells. A-T fibroblasts were not radiosensitized by KU-60019, strongly suggesting that the ATM kinase is specifically targeted. Furthermore, KU-60019 reduced basal S473 AKT phosphorylation, suggesting that the ATM kinase might regulate a protein phosphatase acting on AKT. In line with this finding, the effect of KU-60019 on AKT phosphorylation was countered by low levels of okadaic acid, a phosphatase inhibitor, and A-T cells were impaired in S473 AKT phosphorylation in response to radiation and insulin and unresponsive to KU-60019. We also show that KU-60019 inhibits glioma cell migration and invasion in vitro, suggesting that glioma growth and motility might be controlled by ATM via AKT. Inhibitors of MEK and AKT did not further radiosensitize cells treated with KU-60019, supporting the idea that KU-60019 interferes with prosurvival signaling separate from its radiosensitizing properties. Altogether, KU-60019 inhibits the DNA damage response, reduces AKT phosphorylation and prosurvival signaling, inhibits migration and invasion, and effectively radiosensitizes human glioma cells.

D F Haber, Pan P. Li, J Fraumeni … (1999)
The hCHK2 gene encodes the human homolog of the yeast Cds1 and Rad53 G2 checkpoint kinases, whose activation in response to DNA damage prevents cellular entry into mitosis. Here, it is shown that heterozygous germ line mutations in hCHK2 occur in Li-Fraumeni syndrome, a highly penetrant familial cancer phenotype usually associated with inherited mutations in the TP53 gene. These observations suggest that hCHK2 is a tumor suppressor gene conferring predisposition to sarcoma, breast cancer, and brain tumors, and they also provide a link between the central role of p53 inactivation in human cancer and the well-defined G2 checkpoint in yeast.

This article is distributed under the terms of the Creative Commons Attribution-NonCommercial License, which permits reuse and redistribution, except for commercial purposes, provided that the original author and source are credited.