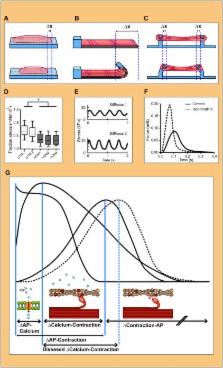 Cardiomyocytes from human pluripotent stem cells (hPSC) are of growing interest as models to understand mechanisms underlying genetic disease, identify potential drug targets and for safety pharmacology as they may predict human relevant effects more accurately and inexpensively than animals or other cell models. Crucial to their optimal use are accurate methods to quantify cardiomyocyte phenotypes accurately and reproducibly. Here, we review current methods for determining biophysical parameters of hPSC‐derived cardiomyocytes (hPSC‐CMs) that recapitulate disease and drug responses. Even though hPSC‐CMs as currently available are immature, various biophysical methods are nevertheless already providing useful insights into the biology of the human heart and its maladies. Advantages and limitations of assays currently available looking toward applications of hPSC‐CMs are described with examples of how they have been used to date. This will help guide the choice of biophysical method to characterize healthy cardiomyocytes and their pathologies in vitro. S tem C ells 2016;34:2008–2015

Maria C. N. Marchetto,  Christine L. Mummery,  Milena Bellin … (2012)
Worldwide increases in life expectancy have been paralleled by a greater prevalence of chronic and age-associated disorders, particularly of the cardiovascular, neural and metabolic systems. This has not been met by commensurate development of new drugs and therapies, which is in part owing to the difficulty in modelling human diseases in laboratory assays or experimental animals. Patient-specific induced pluripotent stem (iPS) cells are an emerging paradigm that may address this. Reprogrammed somatic cells from patients are already applied in disease modelling, drug testing and drug discovery, thus enabling researchers to undertake studies for treating diseases 'in a dish', which was previously inconceivable.

K Svoboda,  D Tank,  W Denk … (1997)
The dendrites of mammalian pyramidal neurons contain a rich collection of active conductances that can support Na+ and Ca2+ action potentials (for a review see ref. 1). The presence, site of initiation, and direction of propagation of Na+ and Ca2+ action potentials are, however, controversial, and seem to be sensitive to resting membrane potential, ionic composition, and degree of channel inactivation, and depend on the intensity and pattern of synaptic stimulation. This makes it difficult to extrapolate from in vitro experiments to the situation in the intact brain. Here we show that two-photon excitation laser scanning microscopy can penetrate the highly scattering tissue of the intact brain. We used this property to measure sensory stimulus-induced dendritic [Ca2+] dynamics of layer 2/3 pyramidal neurons of the rat primary vibrissa (Sm1) cortex in vivo. Simultaneous recordings of intracellular voltage and dendritic [Ca2+] dynamics during whisker stimulation or current injection showed increases in [Ca2+] only in coincidence with Na+ action potentials. The amplitude of these [Ca2+] transients at a given location was approximately proportional to the number of Na+ action potentials in a short burst. The amplitude for a given number of action potentials was greatest in the proximal apical dendrite and declined steeply with increasing distance from the soma, with little Ca2+ accumulation in the most distal branches, in layer 1. This suggests that widespread Ca2+ action potentials were not generated, and any significant [Ca2+] increase depends on somatically triggered Na+ action potentials.

Ensembles of engineered cardiac tissues for physiological and pharmacological study: heart on a chip.

Nancy McCain,  Anna Grosberg,  Daniel P Alford … (2011)
Traditionally, muscle physiology experiments require multiple tissue samples to obtain morphometric, electrophysiological, and contractility data. Furthermore, these experiments are commonly completed one at a time on cover slips of single cells, isotropic monolayers, or in isolated muscle strips. In all of these cases, variability of the samples hinders quantitative comparisons among experimental groups. Here, we report the design of a "heart on a chip" that exploits muscular thin film technology--biohybrid constructs of an engineered, anisotropic ventricular myocardium on an elastomeric thin film--to measure contractility, combined with a quantification of action potential propagation, and cytoskeletal architecture in multiple tissues in the same experiment. We report techniques for real-time data collection and analysis during pharmacological intervention. The chip is an efficient means of measuring structure-function relationships in constructs that replicate the hierarchical tissue architectures of laminar cardiac muscle.