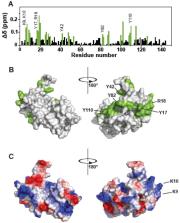 The ESCRT-I factor Tsg101 is essential for sorting endocytic cargo and is exploited by viral pathogens to facilitate egress from cells. Both the nucleocapsid (NC) domain and p6 domain in HIV-1 Gag contribute to recruitment of the protein. However, the role of NC is unclear when the P(S/T)AP motif in p6 is intact, as the motif recruits Tsg101 directly. The zinc fingers in NC bind RNA and membrane and are critical for budding. Tsg101 can substitute for the distal ZnF (ZnF2) and rescue budding of a mutant made defective by deletion of this element. Here, we report that the ubiquitin (Ub) E2 variant (UEV) domain in Tsg101 binds tRNA in vitro. We confirmed that Tsg101 can substitute for ZnF2 when provided at the viral assembly site as a chimeric Gag-Tsg101 protein (Gag-ΔZnF2-Tsg101) and rescue budding. The UEV was not required in this context; however, mutation of the RNA binding determinants in UEV prevented Tsg101 recruitment from the cell interior when Gag and Tsg101 were co-expressed. The same Tsg101 mutations increased recognition of Gag-Ub, suggesting that tRNA and Ub compete for binding sites. This study identifies a novel Tsg101 binding partner that may contribute to its function in recognition of Ub-modified cargo.

Andrew Kim,  Michael F. Summers,  Richard Miller … (2006)
During the late phase of HIV type 1 (HIV-1) replication, newly synthesized retroviral Gag proteins are targeted to the plasma membrane of most hematopoietic cell types, where they colocalize at lipid rafts and assemble into immature virions. Membrane binding is mediated by the matrix (MA) domain of Gag, a 132-residue polypeptide containing an N-terminal myristyl group that can adopt sequestered and exposed conformations. Although exposure is known to promote membrane binding, the mechanism by which Gag is targeted to specific membranes has yet to be established. Recent studies have shown that phosphatidylinositol (PI) 4,5-bisphosphate [PI(4,5)P(2)], a factor that regulates localization of cellular proteins to the plasma membrane, also regulates Gag localization and assembly. Here we show that PI(4,5)P(2) binds directly to HIV-1 MA, inducing a conformational change that triggers myristate exposure. Related phosphatidylinositides PI, PI(3)P, PI(4)P, PI(5)P, and PI(3,5)P(2) do not bind MA with significant affinity or trigger myristate exposure. Structural studies reveal that PI(4,5)P(2) adopts an "extended lipid" conformation, in which the inositol head group and 2'-fatty acid chain bind to a hydrophobic cleft, and the 1'-fatty acid and exposed myristyl group bracket a conserved basic surface patch previously implicated in membrane binding. Our findings indicate that PI(4,5)P(2) acts as both a trigger of the myristyl switch and a membrane anchor and suggest a potential mechanism for targeting Gag to membrane rafts.

A. Ono,  S. Ablan,  S J Lockett … (2004)
A critical early event in the HIV type 1 (HIV-1) particle assembly pathway is the targeting of the Gag protein to the site of virus assembly. In many cell types, assembly takes place predominantly at the plasma membrane. Cellular factors that regulate Gag targeting remain undefined. The phosphoinositide phosphatidylinositol (4,5) bisphosphate [PI(4,5)P2] controls the plasma membrane localization of a number of cellular proteins. To explore the possibility that this lipid may be involved in Gag targeting and virus particle production, we overexpressed phosphoinositide 5-phosphatase IV, an enzyme that depletes cellular PI(4,5)P2, or overexpressed a constitutively active form of Arf6 (Arf6/Q67L), which induces the formation of PI(4,5)P2-enriched endosomal structures. Both approaches severely reduced virus production. Upon 5-phosphatase IV overexpression, Gag was no longer localized on the plasma membrane but instead was retargeted to late endosomes. Strikingly, in cells expressing Arf6/Q67L, Gag was redirected to the PI(4,5)P2-enriched vesicles and HIV-1 virions budded into these vesicles. These results demonstrate that PI(4,5)P2 plays a key role in Gag targeting to the plasma membrane and thus serves as a cellular determinant of HIV-1 particle production.