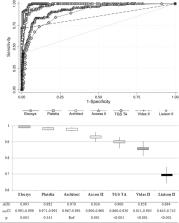 Background: Immunocompromised patients are at high risk for the development of severe toxoplasmosis from tissue cyst reactivation, the most frequently, or from recently acquired acute infections. Knowledge of serologic status is therefore crucial. Screening for toxoplasmosis is sometimes performed while patients are already immunocompromised and have a low or even undetectable IgG titer by routine automated enzyme immunoassays. The aim of this study was to assess the sensitivity and specificity of seven reagents for the detection of low levels of IgG. Sera from 354 patients were collected and analysed. Results: Elecsys ® offered the best analytic performances, superior to those of Architect ® and Platelia ®, which were superior to those of Access II ® and TGS TA ®. Vidas II ® and Liaison II ® reagents exhibited poor analytical performances in this cohort. For Elecsys ®, Platelia ® and Architect ®, new thresholds for the grey zone and positive zone have been defined to improve the sensitivity of these reagents while maintaining excellent specificity. Conclusions: Commercialized assays for toxoplasmosis screening are not suitable for IgG low-level detection in patients without adapting the supplier thresholds to avoid false negative results and risk generalized toxoplasmosis.

Toxoplasmosis: A history of clinical observations.

Mark L. Weiss,  Jitender Dubey (2009)
It has been 100 years since Toxoplasma gondii was initially described in Tunis by Nicolle and Manceaux (1908) in the tissues of the gundi (Ctenodoactylus gundi) and in Brazil by Splendore (1908) in the tissues of a rabbit. Toxoplasma gondii is a ubiquitous, Apicomplexan parasite of warm-blooded animals that can cause several clinical syndromes including encephalitis, chorioretinitis, congenital infection and neonatal mortality. Fifteen years after the description of T. gondii by Nicolle and Manceaux a fatal case of toxoplasmosis in a child was reported by Janků. In 1939 Wolf, Cowen and Paige were the first to conclusively identify T. gondii as a cause of human disease. This review examines the clinical manifestations of infection with T. gondii and the history of the discovery of these manifestations.

Incidence and prevalence of Toxoplasma gondii infection in women in France, 1980-2020: model-based estimation.

F Nogareda,  Y. Le Strat,  I Villena … (2014)
Toxoplasmosis is a worldwide zoonosis due to Toxoplasma gondii, a ubiquitous protozoan parasite of warm-blooded animals including humans. In pregnant women, primary infection can cause congenital toxoplasmosis resulting in severe malformations in the newborn. Since 1978, public health authorities in France have implemented a congenital toxoplasmosis prevention programme, including monthly serological screening of all seronegative pregnant women, and treatment in case of seroconversion. However, this programme does not produce systematic surveillance data on incidence and prevalence. Our objective was to estimate the incidence and prevalence of T. gondii infection, and the incidence of seroconversion during pregnancy in women in France. We used a catalytic model to estimate incidence and prevalence of Toxoplasma infection between 1980 and 2020 in women of childbearing age. We used age- and time-specific seroprevalence data obtained from the National Perinatal Surveys (NPS) conducted in 1995, 2003 and 2010. We assumed that incidence depends both on age and calendar time, and can be expressed as the product of two unknown functions. We also estimated incidence of seroconversion during pregnancy in 2010 from the NPS and the National Surveillance of Congenital Toxoplasmosis (ToxoSurv). We combined data of 42208 women aged 15-45 years with serology available from the three NPS. For women aged 30 years the modelled incidence decreased from 7·5/1000 susceptible women in 1980 to 3·5/1000 in 2000. In 2010 the incidence was 2·4/1000. The predicted incidence and prevalence for 2020 was 1·6/1000 and 27%, respectively. The incidence of seroconversion during pregnancy in 2010 was estimated at 2·1/1000 susceptible pregnant women (95% CI 1·3-3·1) from the NPS and 1·9 (95% CI 1·8-2·1) from ToxoSurv. Incidence and prevalence of Toxoplasma infection has decreased markedly during the last 30 years. This decrease may be explained by a lower exposure to the parasite by changes in food habits and by improved hygiene practices in meat production. Modelled estimations were consistent with estimates observed in other studies conducted previously in France. The catalytic modelling provides reliable estimates of incidence and prevalence of Toxoplasma infection over time. This approach might be useful for evaluating preventive programme for toxoplasmosis.

C Hulin,  E Renoult,  Benedikt Kessler … (1997)
Six patients with toxoplasmosis complicating renal transplantation are described, and 25 other reported cases are reviewed. The mean age of the 31 patients was 35.16 years. Most of the recipients (25 of 29) showed signs of toxoplasmosis within 3 months post-transplantation, with fever, neurological disturbances, and pneumonia as the main clinical features. Diagnosis was established at autopsy in 15 cases, by serology in 13 cases, and by direct examination, culture, or polymerase chain reaction of biological samples in 5 cases. Seventeen patients also had concomitant infections. The donor was the likely source of transmission to 10 recipients; reactivation was suspected in two cases. The source of transmission could not be determined for the remaining 19 patients. The mortality rate was 64.5%. Ten of the 11 patients given specific treatment survived, indicating that early diagnosis and therapy are essential.