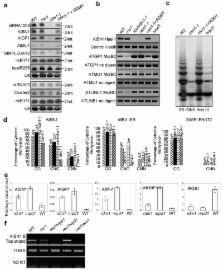 DNA methylation is an important epigenetic mark in many eukaryotes 1- 5. In plants, 24-nt small interfering RNAs (siRNAs) bound to the effector protein, Argonaute 4 (AGO4) can direct de novo DNA methylation by the methyltransferase DRM2 2, 4- 6. Here we report a new regulator of RNA-directed DNA methylation (RdDM) in Arabidopsis: RDM1. Loss-of-function mutations in the RDM1 gene impair the accumulation of 24-nt siRNAs, reduce DNA methylation, and release transcriptional gene silencing at RdDM target loci. RDM1 encodes a small protein that appears to bind single-stranded methyl DNA, and associates and co-localizes with RNA polymerase II, AGO4 and DRM2 in the nucleus. Our results suggest that RDM1 is a component of the RdDM effector complex and may play a role in linking siRNA production with pre-existing or de novo cytosine methylation. Our results also suggest that although RDM1 and Pol V may function together at some RdDM target sites in the peri-nucleolar siRNA processing center, Pol II rather than Pol V is associated with the RdDM effector complex at target sites in the nucleoplasm.

Highly integrated single-base resolution maps of the epigenome in Arabidopsis.

David Baulcombe (2004)
There are at least three RNA silencing pathways for silencing specific genes in plants. In these pathways, silencing signals can be amplified and transmitted between cells, and may even be self-regulated by feedback mechanisms. Diverse biological roles of these pathways have been established, including defence against viruses, regulation of gene expression and the condensation of chromatin into heterochromatin. We are now in a good position to investigate the full extent of this functional diversity in genetic and epigenetic mechanisms of genome control.

Alexandre Filipe Borges,  Milos Tanurdzic,  P. Becker … (2009)
The mutagenic activity of transposable elements (TEs) is suppressed by epigenetic silencing and small interfering RNAs (siRNAs), especially in gametes that could transmit transposed elements to the next generation. In pollen from the model plant Arabidopsis, we show that TEs are unexpectedly reactivated and transpose, but only in the pollen vegetative nucleus, which accompanies the sperm cells but does not provide DNA to the fertilized zygote. TE expression coincides with downregulation of the heterochromatin remodeler decrease in DNA methylation 1 and of many TE siRNAs. However, 21 nucleotide siRNAs from Athila retrotransposons are generated and accumulate in pollen and sperm, suggesting that siRNA from TEs activated in the vegetative nucleus can target silencing in gametes. We propose a conserved role for reprogramming in germline companion cells, such as nurse cells in insects and vegetative nuclei in plants, to reveal intact TEs in the genome and regulate their activity in gametes.

Correspondence and requests for materials should be addressed to J.K.Z. ( jian-kang.zhu@ 123456ucr.edu )