Transposon Molecular Domestication and the Evolution of the RAG Recombinase 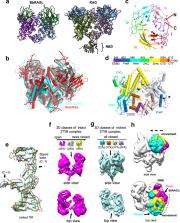 Domestication of a transposon to give rise to the RAG1/RAG2 recombinase and V(D)J recombination was a pivotal event in the evolution of the jawed vertebrate adaptive immune system. The evolutionary adaptations that transformed the ancestral RAG transposase into a RAG recombinase with appropriately regulated DNA cleavage and transposition activities are not understood. Here, beginning with cryo-electron microscopy structures of RAG’s evolutionary relative, the ProtoRAG transposase from amphioxus, we identify amino acid residues and domains whose acquisition or loss underpins RAG’s propensity for coupled cleavage, preference for asymmetric DNA substrates, and inability to perform transposition in cells. In particular, we identify two jawed-vertebrate-specific adaptations—arginine 848 in RAG1 and an acidic region in RAG2—that together suppress RAG-mediated transposition more than 1000-fold. Our findings reveal a two-tiered mechanism for suppression of RAG-mediated transposition, illuminate the forces at work during the evolution of V(D)J recombination, and provide insight into the principles governing transposon molecular domestication.

Leonardo Trabuco,  Elizabeth Villa,  Kakoli Mitra … (2008)
A novel method to flexibly fit atomic structures into electron microscopy (EM) maps using molecular dynamics simulations is presented. The simulations incorporate the EM data as an external potential added to the molecular dynamics force field, allowing all internal features present in the EM map to be used in the fitting process, while the model remains fully flexible and stereochemically correct. The molecular dynamics flexible fitting (MDFF) method is validated for available crystal structures of protein and RNA in different conformations; measures to assess and monitor the fitting process are introduced. The MDFF method is then used to obtain high-resolution structures of the E. coli ribosome in different functional states imaged by cryo-EM.

D Schatz,  Gregory Swanson (2010)
V(D)J recombination assembles immunoglobulin and T cell receptor genes during lymphocyte development through a series of carefully orchestrated DNA breakage and rejoining events. DNA cleavage requires a series of protein-DNA complexes containing the RAG1 and RAG2 proteins and recombination signals that flank the recombining gene segments. In this review, we discuss recent advances in our understanding of the function and domain organization of the RAG proteins, the composition and structure of RAG-DNA complexes, and the pathways that lead to the formation of these complexes. We also consider the functional significance of RAG-mediated histone recognition and ubiquitin ligase activities, and the role played by RAG in ensuring proper repair of DNA breaks made during V(D)J recombination. Finally, we propose a model for the formation of RAG-DNA complexes that involves anchoring of RAG1 at the recombination signal nonamer and RAG2-dependent surveillance of adjoining DNA for suitable spacer and heptamer sequences.

Martin Gellert (2001)
V(D)J recombination is the specialized DNA rearrangement used by cells of the immune system to assemble immunoglobulin and T-cell receptor genes from the preexisting gene segments. Because there is a large choice of segments to join, this process accounts for much of the diversity of the immune response. Recombination is initiated by the lymphoid-specific RAG1 and RAG2 proteins, which cooperate to make double-strand breaks at specific recognition sequences (recombination signal sequences, RSSs). The neighboring coding DNA is converted to a hairpin during breakage. Broken ends are then processed and joined with the help of several factors also involved in repair of radiation-damaged DNA, including the DNA-dependent protein kinase (DNA-PK) and the Ku, Artemis, DNA ligase IV, and Xrcc4 proteins, and possibly histone H2AX and the Mre11/Rad50/Nbs1 complex. There may be other factors not yet known. V(D)J recombination is strongly regulated by limiting access to RSS sites within chromatin, so that particular sites are available only in certain cell types and developmental stages. The roles of enhancers, histone acetylation, and chromatin remodeling factors in controlling accessibility are discussed. The RAG proteins are also capable of transposing RSS-ended fragments into new DNA sites. This transposition helps to explain the mechanism of RAG action and supports earlier proposals that V(D)J recombination evolved from an ancient mobile DNA element.