Impact of Sampling Period on Population Pharmacokinetic Analysis of Antibiotics: Why do You Take Blood Samples Following the Fourth Dose? 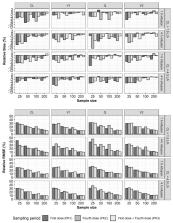 To date, many population pharmacokinetic models of antibiotics have been developed using blood sampling data after the fourth or fifth dose, which represents steady-state levels. However, if a model developed using blood sampled after the first dose is equivalent to that using blood sampled after the fourth dose, it would be advantageous to utilize the former. The aim of this study was to investigate the effect of blood sampling after the first and/or fourth drug administration on the accuracy and precision of parameter estimates. A previously reported robust, two-compartment model of vancomycin was used for simulation to evaluate the performances of the parameter estimates. The parameter estimation performances were assessed using relative bias and relative root mean square error. Performance was investigated in 72 scenarios consisting of a combination of two blood sampling periods (the first and fourth dose), two total clearances, three infusion times, and four sample sizes. The population pharmacokinetic models from data collected at the first dose and those collected at the fourth dose produced parameter estimates that were similar in accuracy and precision. This study will contribute to increasing the efficiency and simplicity of antibiotic pharmacokinetic studies.

A new initiative on precision medicine.

Francis Collins,  Harold E. Varmus (2015)
President Obama has announced a research initiative that aims to accelerate progress toward a new era of precision medicine, with a near-term focus on cancers and a longer-term aim to generate knowledge applicable to the whole range of health and disease.

Catherine M Stein,  Timothy B Gage,  L Gong … (2011)
Warfarin is a widely used anticoagulant with a narrow therapeutic index and large interpatient variability in the dose required to achieve target anticoagulation. Common genetic variants in the cytochrome P450-2C9 (CYP2C9) and vitamin K-epoxide reductase complex (VKORC1) enzymes, in addition to known nongenetic factors, account for ~50% of warfarin dose variability. The purpose of this article is to assist in the interpretation and use of CYP2C9 and VKORC1 genotype data for estimating therapeutic warfarin dose to achieve an INR of 2-3, should genotype results be available to the clinician. The Clinical Pharmacogenetics Implementation Consortium (CPIC) of the National Institutes of Health Pharmacogenomics Research Network develops peer-reviewed gene-drug guidelines that are published and updated periodically on http://www.pharmgkb.org based on new developments in the field.(1).

Importance of shrinkage in empirical bayes estimates for diagnostics: problems and solutions.

R Savic,  O. Karlsson (2009)
Empirical Bayes ("post hoc") estimates (EBEs) of etas provide modelers with diagnostics: the EBEs themselves, individual prediction (IPRED), and residual errors (individual weighted residual (IWRES)). When data are uninformative at the individual level, the EBE distribution will shrink towards zero (eta-shrinkage, quantified as 1-SD(eta (EBE))/omega), IPREDs towards the corresponding observations, and IWRES towards zero (epsilon-shrinkage, quantified as 1-SD(IWRES)). These diagnostics are widely used in pharmacokinetic (PK) pharmacodynamic (PD) modeling; we investigate here their usefulness in the presence of shrinkage. Datasets were simulated from a range of PK PD models, EBEs estimated in non-linear mixed effects modeling based on the true or a misspecified model, and desired diagnostics evaluated both qualitatively and quantitatively. Identified consequences of eta-shrinkage on EBE-based model diagnostics include non-normal and/or asymmetric distribution of EBEs with their mean values ("ETABAR") significantly different from zero, even for a correctly specified model; EBE-EBE correlations and covariate relationships may be masked, falsely induced, or the shape of the true relationship distorted. Consequences of epsilon-shrinkage included low power of IPRED and IWRES to diagnose structural and residual error model misspecification, respectively. EBE-based diagnostics should be interpreted with caution whenever substantial eta- or epsilon-shrinkage exists (usually greater than 20% to 30%). Reporting the magnitude of eta- and epsilon-shrinkage will facilitate the informed use and interpretation of EBE-based diagnostics.