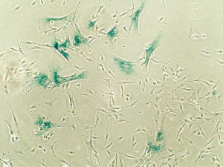 The mesenchymal stroma harbors an important population of cells that possess stem cell-like characteristics including self renewal and differentiation capacities and can be derived from a variety of different sources. These multipotent mesenchymal stem cells (MSC) can be found in nearly all tissues and are mostly located in perivascular niches. MSC have migratory abilities and can secrete protective factors and act as a primary matrix for tissue regeneration during inflammation, tissue injuries and certain cancers.

These functions underlie the important physiological roles of MSC and underscore a significant potential for the clinical use of distinct populations from the various tissues. MSC derived from different adult (adipose tissue, peripheral blood, bone marrow) and neonatal tissues (particular parts of the placenta and umbilical cord) are therefore compared in this mini-review with respect to their cell biological properties, surface marker expression and proliferative capacities. In addition, several MSC functions including in vitro and in vivo differentiation capacities within a variety of lineages and immune-modulatory properties are highlighted. Differences in the extracellular milieu such as the presence of interacting neighbouring cell populations, exposure to proteases or a hypoxic microenvironment contribute to functional developments within MSC populations originating from different tissues, and intracellular conditions such as the expression levels of certain micro RNAs can additionally balance MSC function and fate.

M Dominici,  K Le Blanc,  I. Mueller … (2006)
The considerable therapeutic potential of human multipotent mesenchymal stromal cells (MSC) has generated markedly increasing interest in a wide variety of biomedical disciplines. However, investigators report studies of MSC using different methods of isolation and expansion, and different approaches to characterizing the cells. Thus it is increasingly difficult to compare and contrast study outcomes, which hinders progress in the field. To begin to address this issue, the Mesenchymal and Tissue Stem Cell Committee of the International Society for Cellular Therapy proposes minimal criteria to define human MSC. First, MSC must be plastic-adherent when maintained in standard culture conditions. Second, MSC must express CD105, CD73 and CD90, and lack expression of CD45, CD34, CD14 or CD11b, CD79alpha or CD19 and HLA-DR surface molecules. Third, MSC must differentiate to osteoblasts, adipocytes and chondroblasts in vitro. While these criteria will probably require modification as new knowledge unfolds, we believe this minimal set of standard criteria will foster a more uniform characterization of MSC and facilitate the exchange of data among investigators.

Stephen Hedrick,  Jie Huang,  H. Mizuno … (2001)
Future cell-based therapies such as tissue engineering will benefit from a source of autologous pluripotent stem cells. For mesodermal tissue engineering, one such source of cells is the bone marrow stroma. The bone marrow compartment contains several cell populations, including mesenchymal stem cells (MSCs) that are capable of differentiating into adipogenic, osteogenic, chondrogenic, and myogenic cells. However, autologous bone marrow procurement has potential limitations. An alternate source of autologous adult stem cells that is obtainable in large quantities, under local anesthesia, with minimal discomfort would be advantageous. In this study, we determined if a population of stem cells could be isolated from human adipose tissue. Human adipose tissue, obtained by suction-assisted lipectomy (i.e., liposuction), was processed to obtain a fibroblast-like population of cells or a processed lipoaspirate (PLA). These PLA cells can be maintained in vitro for extended periods with stable population doubling and low levels of senescence. Immunofluorescence and flow cytometry show that the majority of PLA cells are of mesodermal or mesenchymal origin with low levels of contaminating pericytes, endothelial cells, and smooth muscle cells. Finally, PLA cells differentiate in vitro into adipogenic, chondrogenic, myogenic, and osteogenic cells in the presence of lineage-specific induction factors. In conclusion, the data support the hypothesis that a human lipoaspirate contains multipotent cells and may represent an alternative stem cell source to bone marrow-derived MSCs.