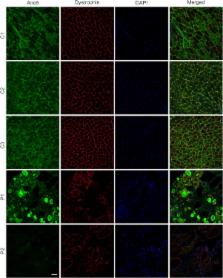 Mutations in ANO5 cause several human diseases including gnathodiaphyseal dysplasia 1 (GDD1), limb‐girdle muscular dystrophy 2L (LGMD2L), and Miyoshi myopathy 3 (MMD3). Previous work showed that complete genetic disruption of Ano5 in mice did not recapitulate human muscular dystrophy, while residual expression of mutant Ano5 in a gene trapped mouse developed muscular dystrophy with defective membrane repair. This suggests that truncated Ano5 expression may be pathogenic. Here, we screened a panel of commercial anti‐Ano5 antibodies using a recombinant adenovirus expressing human Ano5 with FLAG and YFP at the N‐ and C‐terminus, respectively. The monoclonal antibody (mAb) N421A/85 was found to specifically detect human Ano5 by immunoblotting and immunofluorescence staining. The antigen epitope was mapped to a region of 28 residues within the N‐terminus. Immunofluorescence staining of muscle cryosections from healthy control subjects showed that Ano5 is localized at the sarcoplasmic reticulum. The muscle biopsy from a LGMD2L patient homozygous for the c.191dupA mutation showed no Ano5 signal, confirming the specificity of the N421A/85 antibody. Surprisingly, strong Ano5 signal was detected in a patient with compound heterozygous mutations (c.191dupA and a novel splice donor site variant c.363 + 4A > G at the exon 6–intron 6 junction). Interestingly, insertion of the mutant intron 6, but not the wild‐type intron 6, into human ANO5 cDNA resulted in a major transcript that carried the first 158‐bp of intron 6. Transfection of the construct encoding the first 121 amino acids into C2C12 cells resulted in protein aggregate formation, suggesting that aggregate‐forming Ano5 peptide may contribute to the pathogenesis of muscular dystrophy.

Prediction of human mRNA donor and acceptor sites from the DNA sequence.

Søren Brunak,  Jacob Engelbrecht,  Steen Knudsen (1991)
Artificial neural networks have been applied to the prediction of splice site location in human pre-mRNA. A joint prediction scheme where prediction of transition regions between introns and exons regulates a cutoff level for splice site assignment was able to predict splice site locations with confidence levels far better than previously reported in the literature. The problem of predicting donor and acceptor sites in human genes is hampered by the presence of numerous amounts of false positives: here, the distribution of these false splice sites is examined and linked to a possible scenario for the splicing mechanism in vivo. When the presented method detects 95% of the true donor and acceptor sites, it makes less than 0.1% false donor site assignments and less than 0.4% false acceptor site assignments. For the large data set used in this study, this means that on average there are one and a half false donor sites per true donor site and six false acceptor sites per true acceptor site. With the joint assignment method, more than a fifth of the true donor sites and around one fourth of the true acceptor sites could be detected without accompaniment of any false positive predictions. Highly confident splice sites could not be isolated with a widely used weight matrix method or by separate splice site networks. A complementary relation between the confidence levels of the coding/non-coding and the separate splice site networks was observed, with many weak splice sites having sharp transitions in the coding/non-coding signal and many stronger splice sites having more ill-defined transitions between coding and non-coding.

Janine D Brunner,  Novandy K Lim,  Stephan Schenck … (2014)
The TMEM16 family of proteins, also known as anoctamins, features a remarkable functional diversity. This family contains the long sought-after Ca(2+)-activated chloride channels as well as lipid scramblases and cation channels. Here we present the crystal structure of a TMEM16 family member from the fungus Nectria haematococca that operates as a Ca(2+)-activated lipid scramblase. Each subunit of the homodimeric protein contains ten transmembrane helices and a hydrophilic membrane-traversing cavity that is exposed to the lipid bilayer as a potential site of catalysis. This cavity harbours a conserved Ca(2+)-binding site located within the hydrophobic core of the membrane. Mutations of residues involved in Ca(2+) coordination affect both lipid scrambling in N. haematococca TMEM16 and ion conduction in the Cl(-) channel TMEM16A. The structure reveals the general architecture of the family and its mode of Ca(2+) activation. It also provides insight into potential scrambling mechanisms and serves as a framework to unravel the conduction of ions in certain TMEM16 proteins.