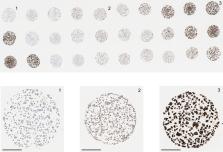 Journal: Laboratory investigation; a journal of technical methods and pathology

Programmed Death 1 Ligand 1 (PD-L1) Immunohistochemistry (IHC) is the key FDA-approved predictive marker to identify responders to anti-PD1 axis drugs. Multiple PD-L1 IHC assays with various antibodies and cut-points have been used in clinical trials across tumor types. Comparative performance characteristics of these assays have been extensively studied qualitatively but not quantitatively. Here we evaluate the use of a standardized PD-L1 Index TMA to objectively determine agreement between antibody assays for PD-L1 applying quantitative digital image analysis. Using a specially constructed Index Tissue Microarray (TMA) containing a panel of 10 isogenic cell lines in triplicate, we tested identical but independently grown batches of isogenic cells to prove Index TMAs can be produced in large quantities and hence serve as a standardization tool. Then the Index TMAs were evaluated using quantitative immunofluorescence (QIF) to validate the TMA itself and also to compare antibodies including E1L3N, SP142 and SP263. Next, an inter-laboratory and inter-assay comparison of 5 PD-L1 chromogenic IHC assays (US Food and Drug Administration (FDA) approved and lab developed test (LDT)) were performed at 12 sites around the USA. As previously reported, the SP142-FDA assay failed to detect low levels of PD-L1 in cell lines distinguished by the other 4 assays. The assays for 22C3-FDA, 28–8-FDA, SP263-FDA and E1L3N-LDT were highly similar across sites and all laboratories showed a high consistency over time for all assays using this Index TMA. In conclusion, we were able to objectively quantify PD-L1 expression on a standardized Index TMA using digital image analysis and we confirmed previous subjective assessments of these assays, but now in a multi-institutional setting. We envision commercial use of this Index TMA or similar smaller version as a useful standardization mechanism to compare results between institutions and to identify abnormalities while running routine clinical samples.

Thomas Long,  Tatjana Antic,  Allen Gown … (2017)
Therapy with anti-PD-L1 immune check-point inhibitors is approved for several cancers, including advanced urothelial carcinomas. PD-L1 prevalence estimates vary widely in bladder cancer, and lack of correlation between expression and clinical outcomes and immunotherapy response may be attributed to methodological differences of the immunohistochemical reagents and procedures. We characterized PD-L1 expression in 235 urothelial carcinomas including 79 matched pairs of primary and metastatic cancers using a panel of four PD-L1 immunoassays in comparison with RNAscope assay using PD-L1-specific probe (CD274). The antibody panel included three FDA-approved clones (22C3 for pembrolizumab, 28.8 for nivolumab, SP142 for atezolizumab), and a commonly used clone E1L3N. Manual scoring of tissue microarrays was performed in each of 235 tumors (624 tissue cores) and compared to an automated image analysis. Expression of PD-L1 in tumor cells by ≥1 marker was detected in 41/142 (28.9%) primary tumors, 13/77 (16.9%) lymph nodes, and 2/16 (12.5%) distant metastases. In positive cases, high PD-L1 expression (>50% cells) was detected in 34.1% primary and 46.7% metastases. Concordant PD-L1 expression status was present in 71/79 (89.9%) cases of matched primary and metastatic urothelial carcinomas. PD-L1 sensitivity ranked from highest to lowest as follows: RNAscope, clone 28.8, 22C3, E1L3N, and SP142. Pairwise concordance correlation coefficients between the four antibodies in 624 tissue cores ranged from 0.76 to 0.9 for tumor cells and from 0.30 to 0.85 for immune cells. RNA and protein expression levels showed moderate to high agreement (0.72-0.87). Intra-tumor expression heterogeneity was low for both protein and RNA assays (interclass correlation coefficients: 0.86-0.94). Manual scores were highly concordant with automated Aperio scores (0.94-0.97). A significant subset of 56/235 (23.8%) urothelial carcinomas stained positive for PD-L1 with high concordance between all four antibodies and RNA ISH assay. Despite some heterogeneity in staining, the overall results are highly concordant suggesting diagnostic equivalence of tested assays.