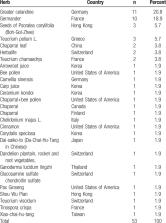 In Taiwan, traditional herbal medication was included in Taiwan's National Health Insurance (NHI) system since 1996 and in 9 out of 10 hospitals have developed their own departments of traditional medicine. This study aims to address the herb-induced liver injury (HILI) after using herbal medicine on the relationship between age, gender, epidemiology, laboratory data, pathogenesis, mobility, and mortality.

We searched the PubMed database with “hepatitis after herbal medicine” and “in human” till 2018 April and returned 163 articles in a systemic review manner. Two cases reports describing in-vitro liver injury were excluded. Reviews and articles without the detailed report, laboratory data and history were excluded from this study. In the end, there were 53 articles enrolled in this study. These enrolled literatures are from France (n = 13), Germany (n = 12), Switzerland (n = 5) United States of America (n = 4), Korea (n = 4), Hong Kong (n = 4), Greece (n = 3), China (n = 2), Canada (n = 1), Italy (n = 1), Thailand (n = 1), Finland (n = 1), Taiwan (n = 1), and Japan (n = 1). The data were analyzed with a commercial statistical software Stata/SE 12.0 program Stata Corporation, College Station, TX, USA. Statistical χ 2 tests were performed and the significance was set at a P value of less than .05 (2-tailed).

In HILI, the female is more commonly seen than male, but less than male in the elderly. The pure substance more often happens to HILI than mixture substance. Female is predominant in the cholestatic type of HILI. The major prevalence of HILI is in Europe rather than Asia. HILI cases in Europe is 2.75-fold than in Asia. This could be due to fewer reports of the herb induced liver injury in Asia compared to Europe. Prevention of HILI is the best policy , because it needs to take 78 ± 59 days to recover.

Causes, clinical features, and outcomes from a prospective study of drug-induced liver injury in the United States.

James Rochon,  Hongqiu Yang,  Timothy Davern … (2008)
Idiosyncratic drug-induced liver injury (DILI) is among the most common causes of acute liver failure in the United States, accounting for approximately 13% of cases. A prospective study was begun in 2003 to recruit patients with suspected DILI and create a repository of biological samples for analysis. This report summarizes the causes, clinical features, and outcomes from the first 300 patients enrolled. Patients with suspected DILI were enrolled based on predefined criteria and followed up for at least 6 months. Patients with acetaminophen liver injury were excluded. DILI was caused by a single prescription medication in 73% of the cases, by dietary supplements in 9%, and by multiple agents in 18%. More than 100 different agents were associated with DILI; antimicrobials (45.5%) and central nervous system agents (15%) were the most common. Causality was considered to be definite in 32%, highly likely in 41%, probable in 14%, possible in 10%, and unlikely in 3%. Acute hepatitis C virus (HCV) infection was the final diagnosis in 4 of 9 unlikely cases. Six months after enrollment, 14% of patients had persistent laboratory abnormalities and 8% had died; the cause of death was liver related in 44%. DILI is caused by a wide array of medications, herbal supplements, and dietary supplements. Antibiotics are the single largest class of agents that cause DILI. Acute HCV infection should be excluded in patients with suspected DILI by HCV RNA testing. The overall 6-month mortality was 8%, but the majority of deaths were not liver related.

H Jaeschke (2002)
This review addresses recent advances in specific mechanisms of hepatotoxicity. Because of its unique metabolism and relationship to the gastrointestinal tract, the liver is an important target of the toxicity of drugs, xenobiotics, and oxidative stress. In cholestatic disease, endogenously generated bile acids produce hepatocellular apoptosis by stimulating Fas translocation from the cytoplasm to the plasma membrane where self-aggregation occurs to trigger apoptosis. Kupffer cell activation and neutrophil infiltration extend toxic injury. Kupffer cells release reactive oxygen species (ROS), cytokines, and chemokines, which induce neutrophil extravasation and activation. The liver expresses many cytochrome P450 isoforms, including ethanol-induced CYP2E1. CYP2E1 generates ROS, activates many toxicologically important substrates, and may be the central pathway by which ethanol causes oxidative stress. In acetaminophen toxicity, nitric oxide (NO) scavenges superoxide to produce peroxynitrite, which then causes protein nitration and tissue injury. In inducible nitric oxide synthase (iNOS) knockout mice, nitration is prevented, but unscavenged superoxide production then causes toxic lipid peroxidation to occur instead. Microvesicular steatosis, nonalcoholic steatohepatitis (NASH), and cytolytic hepatitis involve mitochondrial dysfunction, including impairment of mitochondrial fatty acid beta-oxidation, inhibition of mitochondrial respiration, and damage to mitochondrial DNA. Induction of the mitochondrial permeability transition (MPT) is another mechanism causing mitochondrial failure, which can lead to necrosis from ATP depletion or caspase-dependent apoptosis if ATP depletion does not occur fully. Because of such diverse mechanisms, hepatotoxicity remains a major reason for drug withdrawal from pharmaceutical development and clinical use.