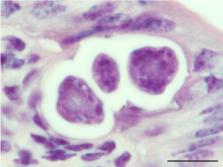 Up to now, four coccidian species have been identified in Rallidae (Aves: Gruiformes): Eimeria mongolica, E. alakuli, E. paludosa and E. porphyrulae. Here, we described an Eimeria species, E. paludosa, from a common gallinule ( Gallinula galeata) in Mexico. Oocysts were ovoid and wall pitted single-layered. A prominent micropyle was present, the oocyst residuum absent and the polar granule was present. On histological examination of tissues, endogenous stages (meronts, microgametocytes and macrogametocytes) were seen in the epithelial cells of the small intestine (upper and lower intestine). In addition to a new locality, this is the first description of E. paludosa from G. galeata and is the third description of a coccidian infecting Rallidae in the Americas.

A guideline for the preparation of species descriptions in the Eimeriidae.

D Duszynski,  P G Wilber (1997)
Members of the suborder Eimeriina (phylum Apicomplexa: class Sporozoea: order Eucoccidiorida) have complex 1 or 2 host life cycles that involve endogenous development in the tissues of vertebrates or invertebrates and exogenous development in an oocyst, usually outside the host(s). Because tissue stages are logistically difficult or even impossible to obtain in natural (wild) host-parasite systems, the vast majority (> 98%) of species in this parasite complex are known only from the structure of their sporulated oocyst. Unfortunately, the quality of these species descriptions is uneven because no guidelines are available for workers in the field to follow. Here we propose a specific set of guidelines for the preparation of species descriptions of coccidia based predominently on the structure of the sporulated oocyst, because the oocyst is the most readily available stage in the life cycle. In addition, we emphasize that ancillary data be incorporated whenever possible with the species description; these data may include, but are not limited to, ecological parameters, prevalence, seasonal data, and the deposition of both host symbiotypes and parasite hepantotypes (= phototypes) into accredited musecums so that accurate identification of both host and parasite material can be assured in perpetuity. And finally, if oocysts are collected in pure suspension, that is, if only one coccidian species (morphotype) is present in the sample, then some oocysts should be saved in 70% ethanol and archived in an accredited museum in the event that future workers might wish to amplify and, later, sequence the parasite's DNA.

Bruno Berto,  Owen McIntosh,  Carlos Lopes (2014)
The oocysts of the coccidia are robust structures, frequently isolated from the feces or urine of their hosts, which provide resistance to mechanical damage and allow the parasites to survive and remain infective for prolonged periods. The diagnosis of coccidiosis, species description and systematics, are all dependent upon characterization of the oocyst. Therefore, this review aimed to the provide a critical overview of the methodologies, advantages and limitations of the currently available morphological, morphometrical and molecular biology based approaches that may be utilized for characterization of these important structures. It has become apparent that no single methodology is sufficient to fully characterize these structures and the majority of researchers favor the use of combinational or polyphasic approaches.

The conceptual basis for a new classification of the coccidia.

Astrid Tenter,  John Barta,  Ian Beveridge … (2002)
At the joint meeting of the 8th International Coccidiosis Conference and the Annual Scientific Meeting of the Australian Society for Parasitology in Palm Cove, Australia, in July 2001, a Controversial Roundtable was held on 'New classification of coccidia'. The aim of this Roundtable was to stimulate and encourage discussion and debate on current classification schemes for the group of parasitic protozoa known as the eimeriid coccidia. In the past, such classifications have been based only on phenotypic characters such as morphology, ultrastructure, life cycles, and host specificity. However, over the past 10-15 years, molecular phylogenetic studies on taxa of the eimeriid coccidia have revealed that several of the families, subfamilies, and genera that have been erected based on non-molecular characters are paraphyletic. Therefore, this Roundtable was an important forum for initial discussions on how a new and more comprehensive classification of the eimeriid coccidia, which takes into consideration both phenotypic and molecular characters, can be devised. The stimulus came from invited speakers who gave introductions into selected areas of taxonomy and classification. Following these introductions, a more general discussion with the audience addressed potential steps that may be taken in future work. This review is the immediate outcome of the Roundtable. It describes advantages and disadvantages of the use of phenotypic or molecular characters as the base for taxonomic schemes for eimeriid coccidia. It gives specific examples for drawbacks of current classifications based only on phenotypic characters as well as potential pitfalls associated with the use of only molecular phylogenies. It addresses current controversies as well as rules of taxonomy and nomenclature relevant for the eimeriid coccidia. Finally, it recommends the establishment of an international group of scientists to meet on a regular basis, stimulate further discussions, and give direction on how the final goal, i.e. a proposal for a revised, and widely accepted, classification of the eimeriid coccidia, may be achieved.

This is an open-access article distributed under the terms of the Creative Commons Attribution Non-Commercial No Derivatives (by-nc-nd) License. (CC-BY-NC-ND 4.0: https://creativecommons.org/licenses/by-nc-nd/4.0/ )